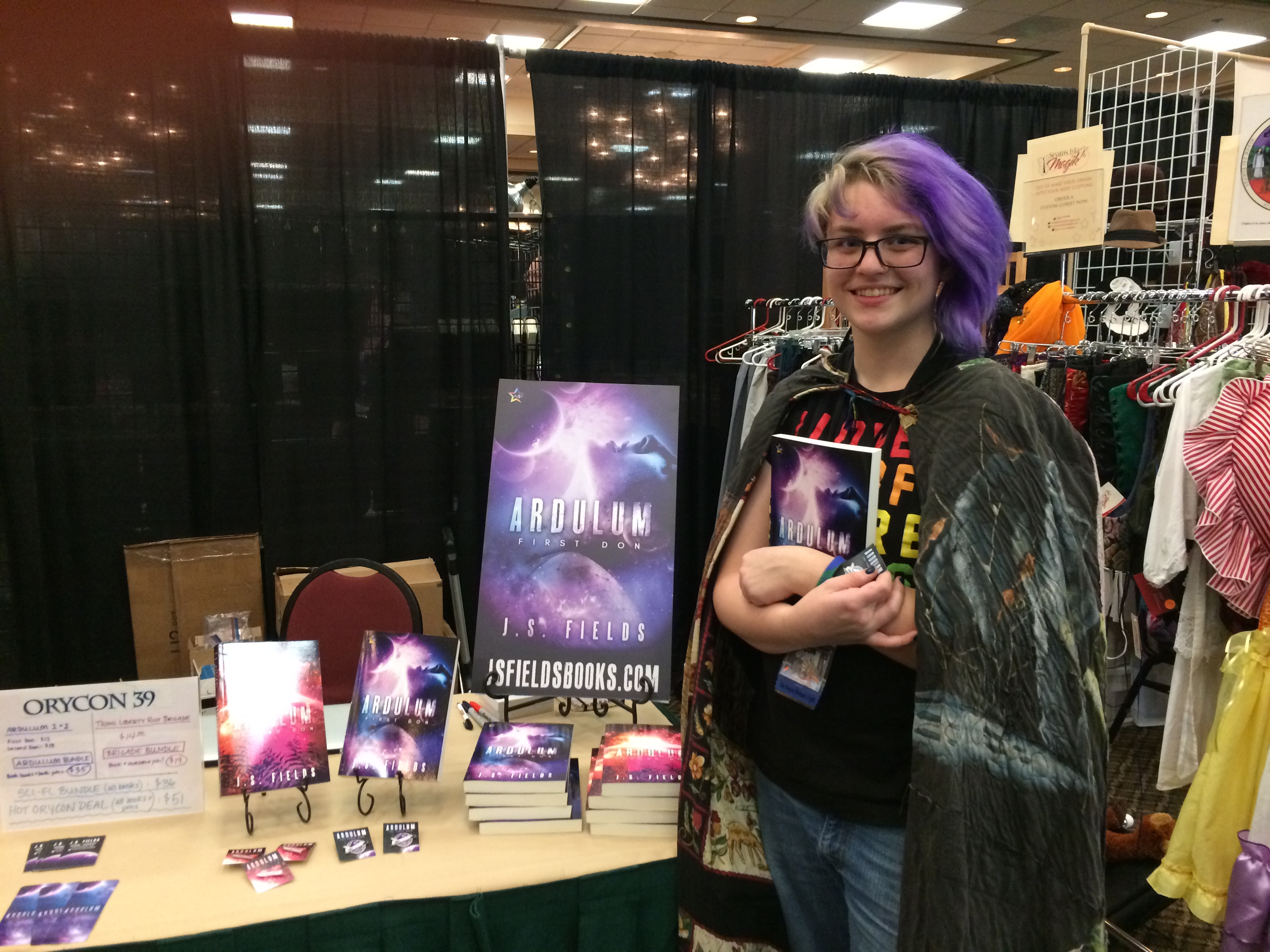 It’s a good day when your new f/f space opera cover matches your hair. Oh and also representation is awesome. So are fans.

“Why do you say that your books are queer? That your characters are queer? Are they sex books?”

“Then why does your characters being queer matter?”

I’ve spread my author wings a bit this year and started being a panelist at cons, and also having a booth in the vendor area to sell copies of ARDULUM. Previous public appearances with my space opera were usually just tacked onto a talk I gave for my nonfiction writing life, wherein I always touted the cellulose-base of the series moreso than anything else.

But cons are different. Cons have my people. And cons, inherently, are very, very queer.

This year I was a vendor at Rose City Comic Con, and the OryCon, both in Portland, OR. I realize that two isn’t a statically significant sample size for anything, but it is interesting that my experience at both was primarily the same: I sold books. Tons of books. Unprepared for the level of interest, I sold out at Rose City. Determined to never sell out again, I took twice as many with me to OryCon and sold more than I did at Rose City. My table mates did equally well–all selling out at Rose City and sweeping OryCon.

Were people just spending? At Rose City, maybe, as money was flying like those horrifying giant butterflies in the Peruvian Amazon rainforest. But at Orycon people were not buying. Book sellers and authors, specifically, bemoaned their terrible sales. By day two, the guy across from us had sold five books. Five.

Let’s talk about that–the other authors. Conversations should be had.

Hooks and taglines are a big deal when you’re trying to get people interested in your book. If you can’t do a solid hook in one sentence, you’re likely to lose the buyer. If you have to spend five minutes explaining the plot, you’re going to lose the buyer. This was a failing I noticed at both cons. Figure out your books’ equivalent of ‘lesbians in space’ (which sells books like you would not believe) if you’re going to hand sell. Ex:

What is this book about?

It’s a space opera like Firefly, but about a hundred times gayer

That’ll get you a few blinks, usually some laughter, and a request for more information. That’s what you want. Contrast with:

What’s this book about?

There’s a planet with a religion that believes in this moving planet, and this woman got exiled for not believing, but now she’s with a sort of ragtag crew on an old ship and she finds this kid who kind of looks like her old gods and she has to come to terms with that.

That’ll get you glazed looks. It’s too much to process all at once, especially since they might be reading your back blurb right then, which, if you’re a decent writer, should say roughly the same thing.

Of course, this assumes you’ve already got the person over to your booth. How do you get someone to your booth? COVER ART. 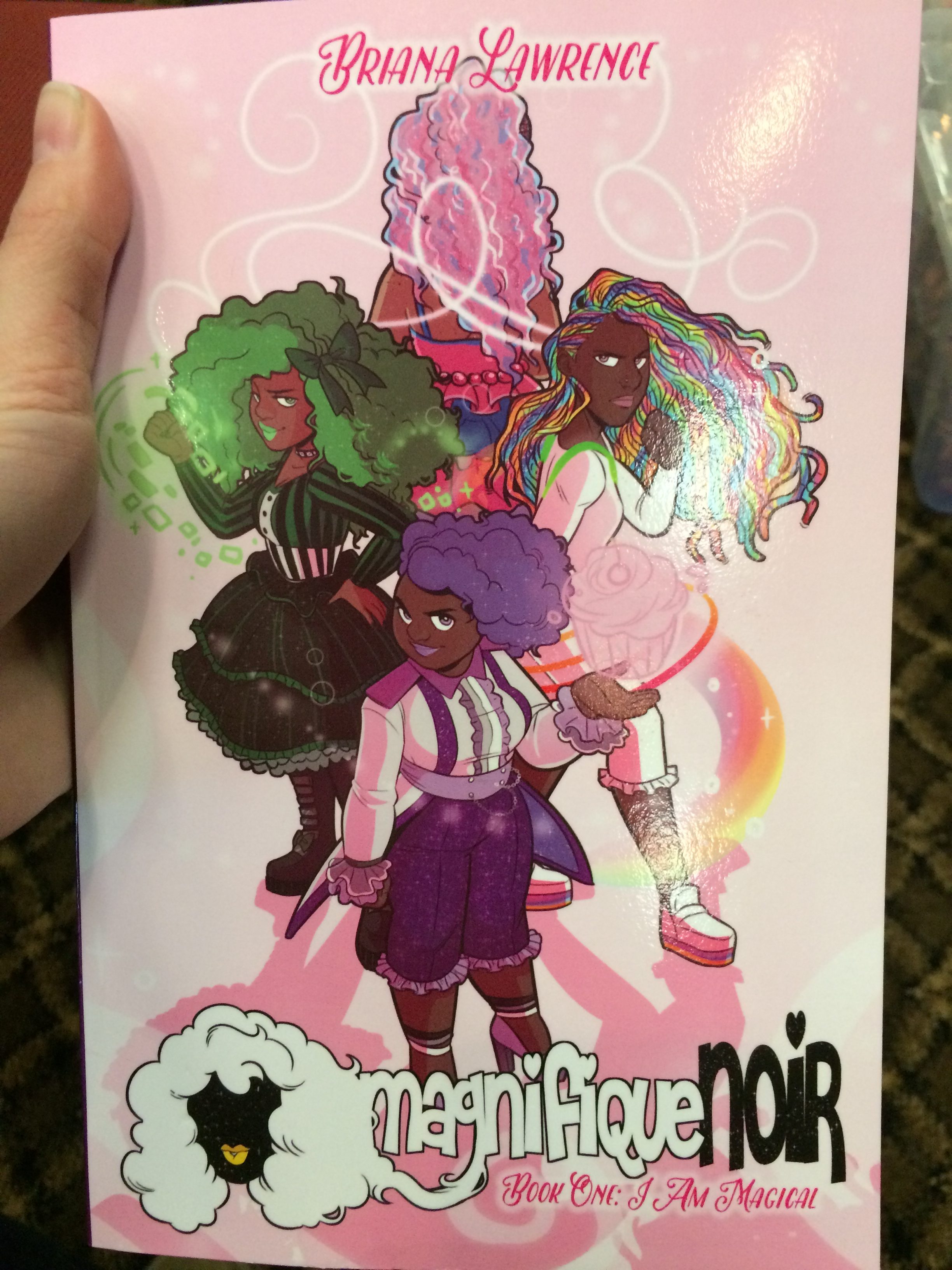 The above is an example of some damn fine cover art.

There were a lot of self-published vendors at Orycon. In general, the quality of the cover art on these books was…not great. There’s no problem with self publishing, obviously, but you have to be willing to shell out money for a half-way decent cover artist. It’s the first impression people have about your book and often determines whether they give your book more than a glance. For some people, myself included, bad cover art is a deal breaker no matter how many people have recommended the book. I don’t want ugly books on my shelves. Period.

Finally, marketing. How do you land the sale? 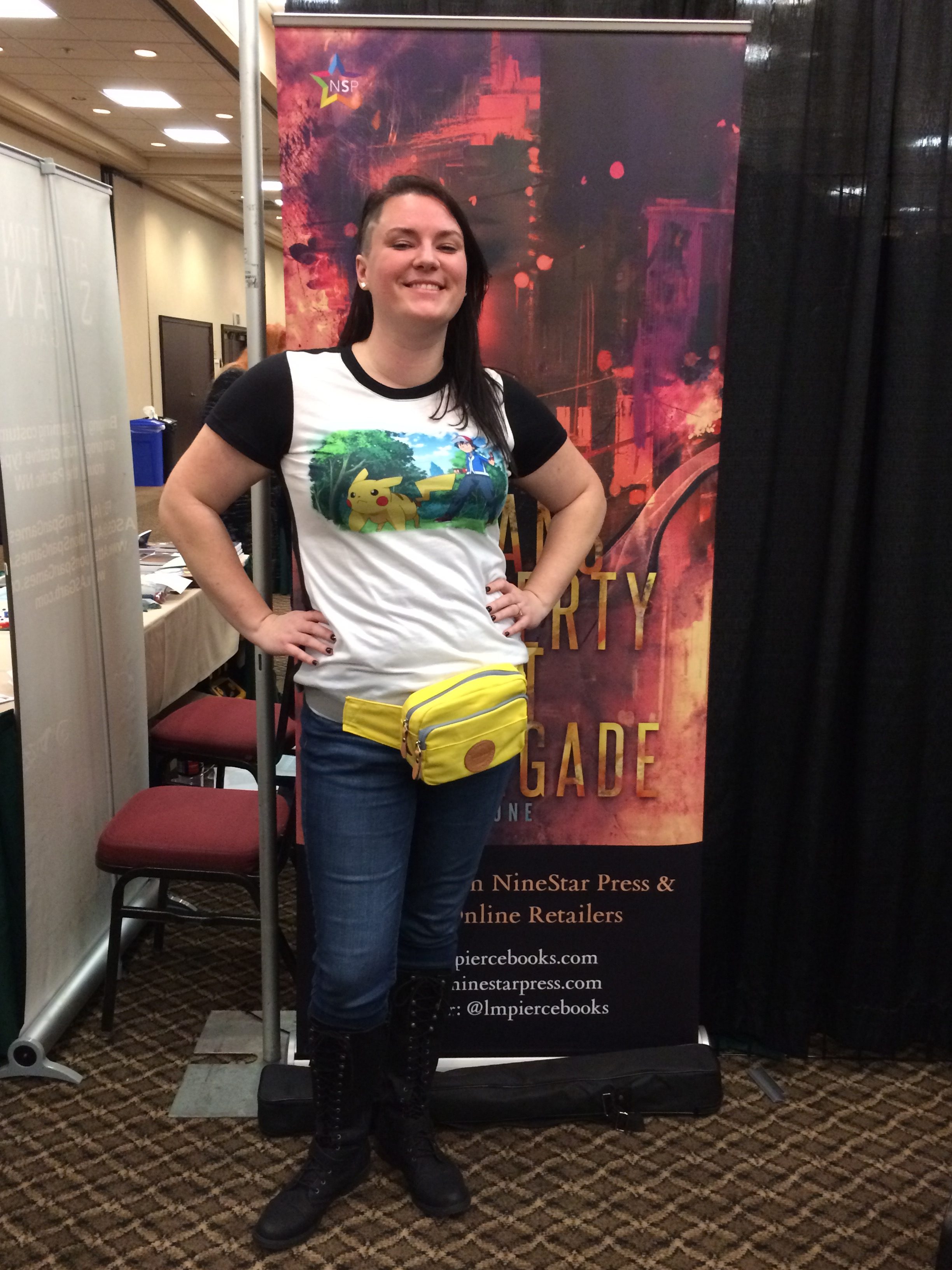 Lindsay believes her fanny pack is A) making a comeback and B) helps with marketing. The jury is still out on both those accounts.

Our table was swamped.

Queer people came. Talked. Shared their stories about lack of representation, or being budding authors themselves. Straight people were excited to support diverse new stories. Teens came and bought books for their closeted siblings with unsupportive parents. We were a refuge. A beacon. We were queer, and unapologetic, and people ate that shit up. Not surprisingly, guess who else did really well (sold out!)? The amazing couple behind MAGNIFIQUE NOIR, the YA book about queer black magical girls (like Sailor Moon, but queerer, and that is pretty damn difficult to do. No Sailor Starlight doubles yet, but maybe book two??).

It was during the last day, when our table was consistently swarmed with people wanting to chat about our books, our lives, being queer authors, or just being friendly, that another author came up to our booth and asked the question above. Why did we say our characters were queer? Why couldn’t they just be people? If the books weren’t about sex, why did any of that matter? It was a similar conversation we’d had the night before, at an author’s party we’d been invited to. Why do you market your books that way? Why do you make being queer such a big deal? Why did your sign at Rose City say: The Gayest Booth at the Con. You’re Welcome!’

I don’t really remember why we started being really upfront about the queer content. Why did we make that sign at Rose City? It probably happened after the second or third teenager came to our booth and nearly burst into tears at finding non-romance fiction with queer characters. Or when people with rainbows on their shirts or in their hair glanced at our booth, and we gave them knowing head nods, and they came over to chat for an hour–about the con, about being queer, about pronouns, whatever. We did it because it made sense at the time, because people wanted to talk to us about being queer, or reading queer characters, or supporting queer writers. The more we talked about being queer, the more people came over. It was the same at OryCon, despite being a much smaller con. People were hungry for queer content. They were tired of not being able to see themselves in their favorite genres of science fiction, tired of not being starship captains and resistance leaders and lead scientists. Lindsay and I, and the fine people of MAGNIFIQUE NOIR (Twitter here), were loud and open about who were were, and helped other people find their voices as well. Because representation matters, even in science fiction, and because black voices and queer voices have been too long silenced in the fiction community, and because we shouldn’t have to hide who our characters are. Being queer isn’t about sex, it’s about breaking the old narratives, and allowing characters to be who they are. There’s no shame in talking about it, or advertising it, or owning who you are.

It’s a nice reminder, too, that diverse content sells. After decades (centuries?) of being told that diverse stories won’t sell to a wide audience, that books need to have cis het white male leads, diverse authors with diverse characters are destroying that lie day by day. Whether at cons, or the New York Times bestsellers list (if you haven’t read THE HATE U GIVE, shame on you, and go buy it now!), diverse books matter, and people want to read them. It’s heartwarming, and beautiful, and makes me really happy to be an author.

Bonus content: I also learned that I always have to con with Lindsay, since she is a lot better at extended conversations than I am with people. I fail at social. Major character flaw. Also probably why I’m a scientist.

TRANS LIBERTY RIOT BRIGADE – by LM Pierce is a gritty dystopian with an intersex lead. Forty percent of the population is born intersex and sex reassignment is mandated by law. Strong social commentary.

ARDULUM: FIRST DON – by J.S. Fields is lesbians in space

ARDULUM: SECOND DON by J.S. Fields is yet more lesbians in space, now with more lesbianing. Very Firefly like.