Queer Representation: bisexuality appears to be generally accepted in world 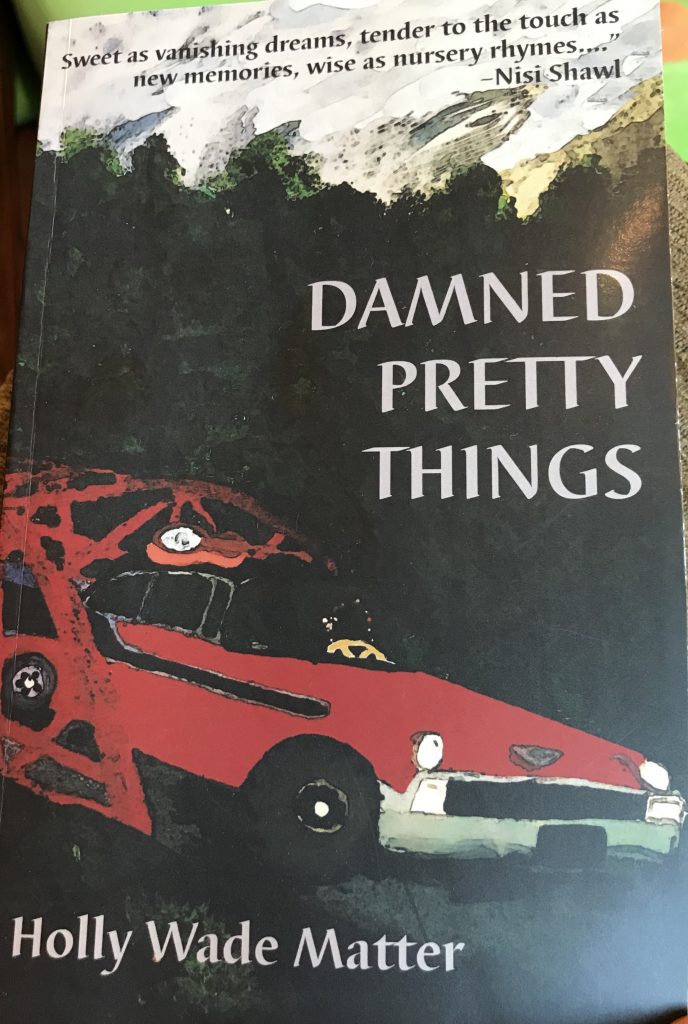 Down-on-her-luck traveling bard Fortune meets the devil on the road and sells her soul for a magical guitar and a fast car. Well, sells her soul and her memories, though she didn’t really consent to that last part.

She travels from town to town, trying to scrounge enough money to buy food and maybe a decent place to sleep. Itinerant and listless and searching for her past, when she meets a strange old man with demands that Fortune deliver him a girl named Maud, Fortune accepts. How can she not, when he offers to pay off her debt to the devil once Maud is in his hands?

Her search for Maud takes her into Sky–a little town with a lot of secrets. Maud turns out to be a tall, eighteen-year-old girl with dreams of leaving Sky for…really anywhere. The two form a fast friendship and decide to travel together, singing and playing guitar and learning about the world.

The strange old man, however, has not forgotten about Maud. Fortune must unravel the secrets of her teenaged companion and a mysterious curse if she is to ever get her memories returned. But are her memories worth the potential cost of turning Maud over to man who can make deals with the devil?

DAMNED PRETTY THINGS is a sweet, sometimes haunting tale about friendship, love, and grief. The writing is well-paced and solid, and there’s just enough element of the supernatural to keep the plot interesting. The book is predominantly Fortune’s journey of healing, but a sizable portion is spent on Maud’s history, including her childhood and otherworldly powers.

One part road trip, one part ghost story, there’s a certain almost inevitability to the friendship between the two women. The chemistry was palpable, to the point where I was surprised the romance line was them functionally chasing the same guy, instead of realizing they were much better suited towards one another. The entire Lightning character felt almost shoehorned into what was otherwise an excellent little friendship/romance.

The Maud/Low romance, as well, while plot relevant, seemed superfluous to the story at large. The idea that Maud ‘gave her love away already’ to the boy she cursed and now has to love that boy, didn’t sit super well with me.

Ignoring the pained romance arcs, the rest of the book is an absolute delight to read. Mystery and danger and friendship weave together like the ‘memories’ in Fortune’s hair. It’s sweet, and creepy, and funny, and wholesome, and in a summer of COVID, makes for a great road trip book (for the road trips none of us get to have right now).

To help unravel the story of the McBride witches and maybe make a deal with the devil, preorder on the Aqueduct Press website (comes out November 2020).

This is a review for the second book in the duology. To read the review for SANTA OLIVIA, click here. 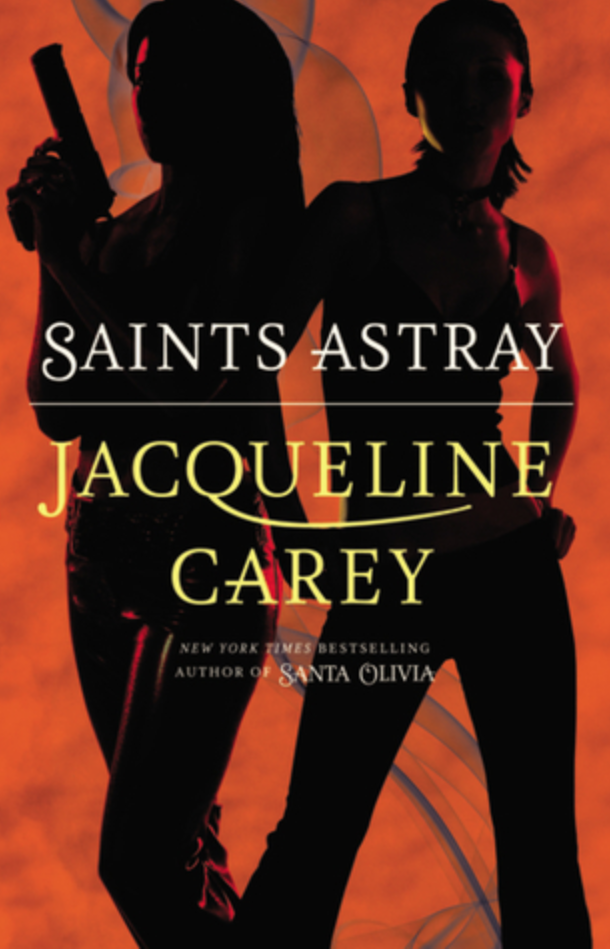 Freshly escaped from Santa Olivia, Loup and Pilar are two hot young women on the run from the US government. One is part genetically-engineered wolf, the other quite buxom. That’s… basically the plot.

The sequel to SANTA OLIVIA sends the duo first south to Mexico, where they meet a group of other wolf-hybrid escapees. They’re all men, of course, which further isolates Loup. After a both exciting and depressing vacation with people who finally get her, but will never really know her, Loup and Pilar decide to take a job offer as Super Secret Agent Bodyguards.

The agency that hires them wants them to go through rigorous training first, which Loup aces but Pilar struggles through. Pilar works through her inferiority complex (and finds out she’s got killer aim with firearms) and the two then proceed through a number of celebrity bodyguard jobs. There’s more cute language, ear blowing, licking, and adorable endearments. I like mush with my action. So too, apparently, does Carey.

While Pilar and Loup are out being Super Agent Bodyguards, an investigation into Outpost 12 (Santa Olivia) rages through the US government. Pilar and Loup eventually use their newfound fame as bouncers for a rock band (no, seriously) to drum up public support to free the outpost, and run into some old friends along the way. There’s yet more kidnapping, a deeper look into the science of Loup, and a lot of Pilar reading fashion magazines.

SAINTS ASTRAY is a more than worthy sequel to SANTA OLIVIA, and once again strikes a great balance between mushy love and ‘shoot em in the face’ action. Again, if you can get the audio version, do it, as the reader is amazing and those mushy scenes are about a billion times hotter when they’re being read to you.

You can become a Super Secret Agent Bodyguard by buying the paperback here, ebook here, or audiobook here. 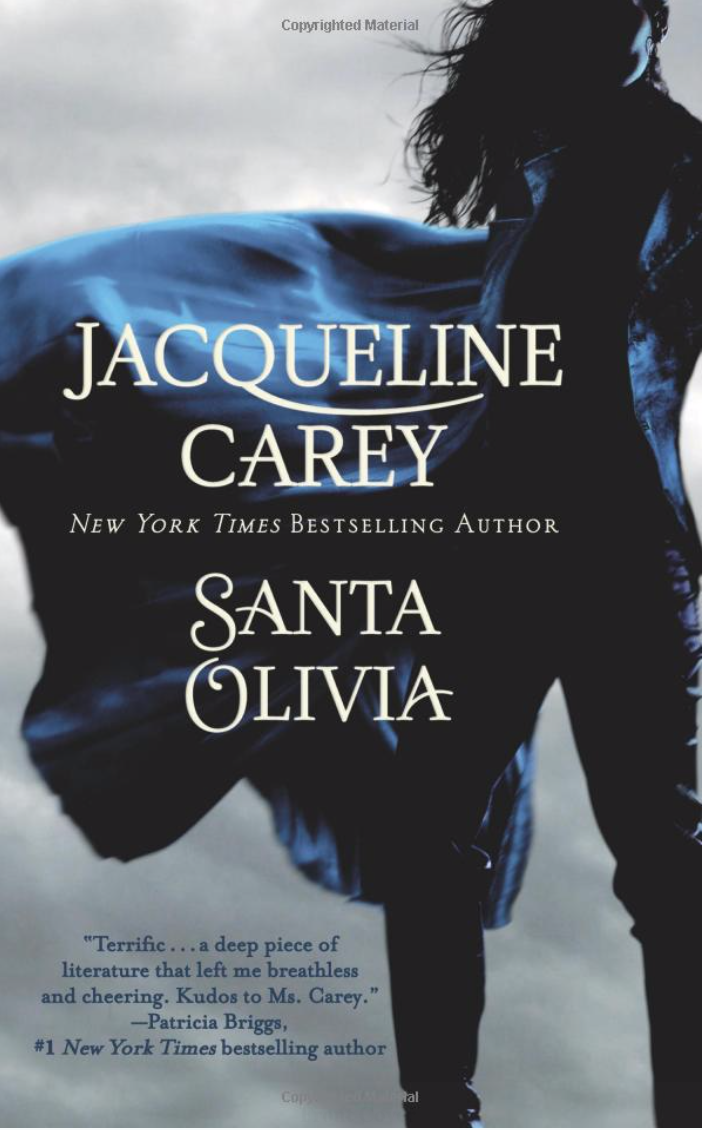 A border town between the USA and Mexico is cut off by the US government as a base to run genetic experimentation trials. The goal: a wolf-human hybrid trained for military operations.

Unfortunately the residents of Santa Olivia were not given a choice about being trapped inside their small town and tensions run high. The only way out is to win a boxing match against a military-ranked boxer in monthly competitions–something none of the residents have ever done.

Things go awry, as they must, when one of the wolf-men escapes the military compound and is sheltered by one of the townspeople. His legacy of their short time together is a daughter with extraordinary strength and speed, and a deep desire to avenge her older brother, who died in a rigged boxing fight that should have won him his freedom.

SANTA OLIVIA is, hands down, my favorite lesbian science fiction book. Though billed as nothing of the sort, the book follows the life of Loupe Garron from her early childhood idolizing her brother, his death, and her eventual superhero style vigilanteism with a ragtag group of orphans as they fight back against the military occupation.

Embedded in the story is a sweet and powerful romance between Loup and Pilar–a busty, slightly older orphan girl. The two come of age as Loup comes fully into her supernatural powers and it is their love for one another that eventually sets Loup free, both from her past and for her future.

The book is written in the same acute pacing that Carey uses in most of her books (another favorite of mine is STARLESS). The romance line is thrilling and sensuous, and numerous lines comparing sex to good quality tequila are just downright hot. There’s a lot of whispering and ear blowing and voluminous bouncing and it’s just really good, okay?

“I bet Coach Roberts would pay you decent money to train a few of his best guys in secret,” she said. “That could be a real job for you, baby. One you’d like.” She licked Loup’s earlobe. “We could get an apartment.”

“Not you.” She shook her head. “Sparring with normal people.”

“Oh.” Pilar blew in her ear, smiled when Loup wriggled again. “It’d be nice, though. Nice big bed. No more getting carpet burn from fooling around on the floor of the choir room.”

There’s plenty of sappy mushy talk and also solid action and a disturbing plot that, even though it came out in 2009, could very well be today. The Santitos gang of orphans are the best ragtag crew the town of Santa Olivia could ask for, and there’s just enough science to bring about wonder, without getting bogged down into the weeks of genetic tinkering.

You can infiltrate Santa Olivia and meet a wolf-woman in ebook here, paperback here, and audio here.

If you have the opportunity to get the audiobook version, I would recommend that in addition to the print, as they are uniquely different experiences.

To read the review for the second book in the duology, SAINTS ASTRAY, click here. 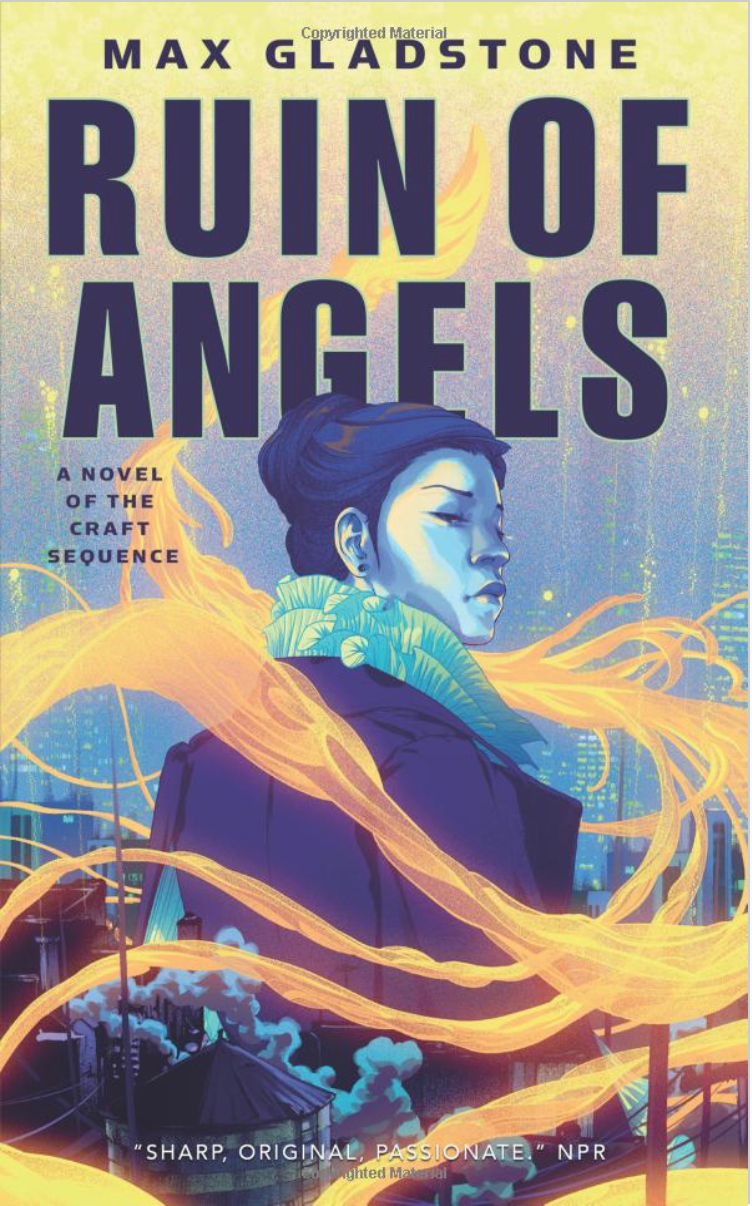 Kai is called to the city of Agdel Lex, built on the ruins of Alikand, to visit her estranged sister, Ley. Once there, she finds Ley tangled up in an intricate plot to free the city from its oppressors. The sisters must find each other, however, before they can stop the multi-faceted threat.

Generally, this is a heist story in a high fantasy setting (urban fantasy, in that it is more modern, but high fantasy nonetheless). Like a lot of high fantasy it employs many POV characters and rich, deep worldbuilding. It is also an amazing tale of sisterhood, as well as a solid romance book. It’s everything, really, which is amazing. There is no one feeling, nor one trope, that consumes this book. Instead, it is a fully fleshed out story in a world so real you can smell it.

The characters were generally very well rounded and dynamic, but there were just so many of them. I had a hard time keeping the secondary characters straight, especially the ones where we only got to be in their heads for a partial chapter or two. The main characters were generally much more interesting, although my interest in the sisters waned as the story progressed and their friends became more dynamic. By the end of the book I was actually more interested in the tertiary characters than anyone else, and had a hard time staying invested in the plot.

While this is book six in a series, each book can function as a stand alone. This book had been recommended to me many times, and I finally just said to hell with the earlier ones, and read it. I’m not sure if the lack of backstory contributed to my confusion, but I’m going to assume it was at least somewhat to blame.

The first two hundred pages or so were very compelling, and despite not having read the previous five books, I didn’t mind being confused. The language was rich enough and the characters round enough that it was a delightful discovery. The middle of the book started to drag, however, with one mini arc after another, and with the continuing introduction of characters, I found myself lost. The end melded together a bit better, but by page 450 I had lost much of my investment.

The ending was solid, and it was worth getting there, but much like when I read any GAME OF THRONES books, I found myself skipping over POVs I just didn’t care about. So while I enjoyed this book, and it had just about every element I look for in a story, I found it generally to be too long. It would have been an amazing 400 page book, but it ran a bit long in the tooth.

This isn’t to say that lovers of high fantasy wouldn’t enjoy it! I often think high fantasy is just a bit too long, and that the stories should be tighter, but I know many high fantasy fans really want an extended ride. Any lovers of Sanderson’s work would feel at home in RUIN OF ANGELS, as would anyone who doesn’t mind juggling more than five POVs.

In terms of queer rep, one of the sisters is a trans woman. The nod to this is subtle, and no one in-world cares at all, which is amazing. This type of accepted, unquestioned queerness was so wonderful. In addition, there are two strong f/f romance lines through the book, and book were sweet and relatable. This book stands very well on queer rep and queer romance, especially for those who like a sturdy fantasy plot along with their ‘I love yous.’