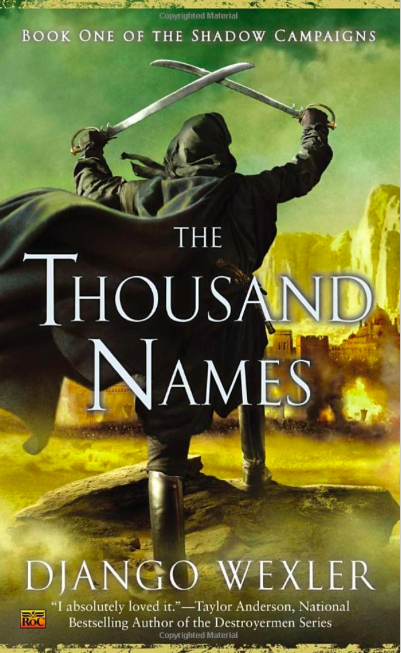 The book is primarily military encounters and battles in a fantasy setting that very much mirrors any number of Europe’s holy wars. The people of color are grey instead of brown or black but are still discussed as primitive, having witchcraft and magic, etc. The white people all practice a religion that banned magic (and had a lot of other Christianity touchstones for those familiar), and the grey people all practice magic. The entertaining part comes in the form of the Church wanting the grey people’s power for their own, and attempting to steal it as part of the land grab campaign.

Women
Much like ISLAND IN THE SEA OF TIME (amusingly, S.M. Stirling blurbed THE THOUSAND NAMES), there are some decent female characters, and lesbian female characters, amid the racist world. Though it takes a while to pass the Bechdel test as most of the armies are made of men (which, really, in a fantasy… come on) we do get three (THREE!) well rounded women. Two are masquerading as men in the army, one a general foot soldier, the other a lieutenant and one of the POV characters. The third is an informant/spy/paper pusher, who ends up having a fantastic arc.

Winter, the only POV woman, is a delight and her sections kept me reading through all the battles that I had little interest in. Her backstory from the orphanage, her love with one of the other girls who is eventually sold as a wife, made her hands down the most compelling character (and the one given the most backstory). There’s no romance for Winter in this book but I’ve been told some crops up around book five. Unfortunately I don’t know if I have another four books of war and thinly veiled racism in me. Still, Winter is an outstanding character for an otherwise male centric military fantasy, and the inclusion of her character should be commended.

Both of the women masquerading as soldiers bind their breasts. This makes sense. What does not make sense is the lack of discussion of how this affects their service. There are several 15 mile runs noted in the book, of which Winter participates, as well as many, many drills. Running in a binder, in the heat, is a quick way to pass out. It is also noted that Winter has been in her section of the military for seven years and only takes the binder off occasionally to quickly bathe. Long term binder use has consequences on internal organs, ribs, etc. None of this is given any discussion, which made it increasingly difficult to suspend disbelief. Winter’s aching breasts are mentioned, in fact, and of course there is a scene where her binder is ripped and breasts tumble out, but no page time is given to actually looking at what wearing a binder for so long, during active military service, would mean.

There’s also a smattering of problematic POV, such as this line:

“Beneath the spectacles, the severe hairstyle, and the mannish clothes, he guessed she was actually quite pretty.”

Again, it’s a character POV, but one that is never rebutted.

Finally, there’s a throwaway line that I’m sure was meant to elicit laughter, but came off as pretty coarse:

‘”It’s been nearly two years.” Winter drew her knees to her chest. “I feel like I’d nearly convinced myself.'”

This comes from a scene where Winter is discussing her ‘secret’ with a woman she’s rescued. And while I understand what the author was getting at, it falls into the problematic narrative that so often crops up in the ‘woman pretending to be man’ trope. Gender identity is not something one can turn on or off at the drop of a hat. If Winter is indeed a woman, pretending to be a man would not have been easy, and there is no way living like one for that long would have changed her identity unless she was already questioning. Which of course, is possible, but no hint is given of that in the narrative.

Grey skin is still a POC

The people being fought, who get very little page time and limited POV time, are the grey skinned (sometimes copper-grey skinned) people of a relatively tropical location, who hold mystic magical knowledge. Some wear loin cloths. They’re pastoral to a point and heard sheep and goats. They are repeatedly referred to as ‘heathens.’ I suspect the author was trying to showcase the problems with characterizing people in such a manner by having some of the most vile characters do the discussions of heathen natures, but the narrative isn’t consistent and the attitudes are never rebutted. One of the white leaders who allows his men to rape and murder women and children while taking a village (and the imagery is quite graphic) is defended by one of our supposedly more upstanding POV characters, Marcus, when a superior wants to fire him. Marcus standing up for him helps him be a better man…. on the backs of all the POC who were raped and murdered.

Even the POC refer to themselves using animal language on occasion, which clearly doesn’t help things.

“Jaffa sat, watching them go after each other like a couple of angry cats.”

Finally, much as with ISLAND IN THE SEA OF TIME, this is a decent story with a strong female lesbian lead that falls short with racial equality. The various ‘power ups’ that happen at the end could make the sequels interesting, but there is a lot to unpack in other areas for the reader. POC and trans readers, in particular, will want to prepare themselves before diving into the series.

You can contemplate problematic tropes by buying the book in ebook here, paperback here and audiobook here. 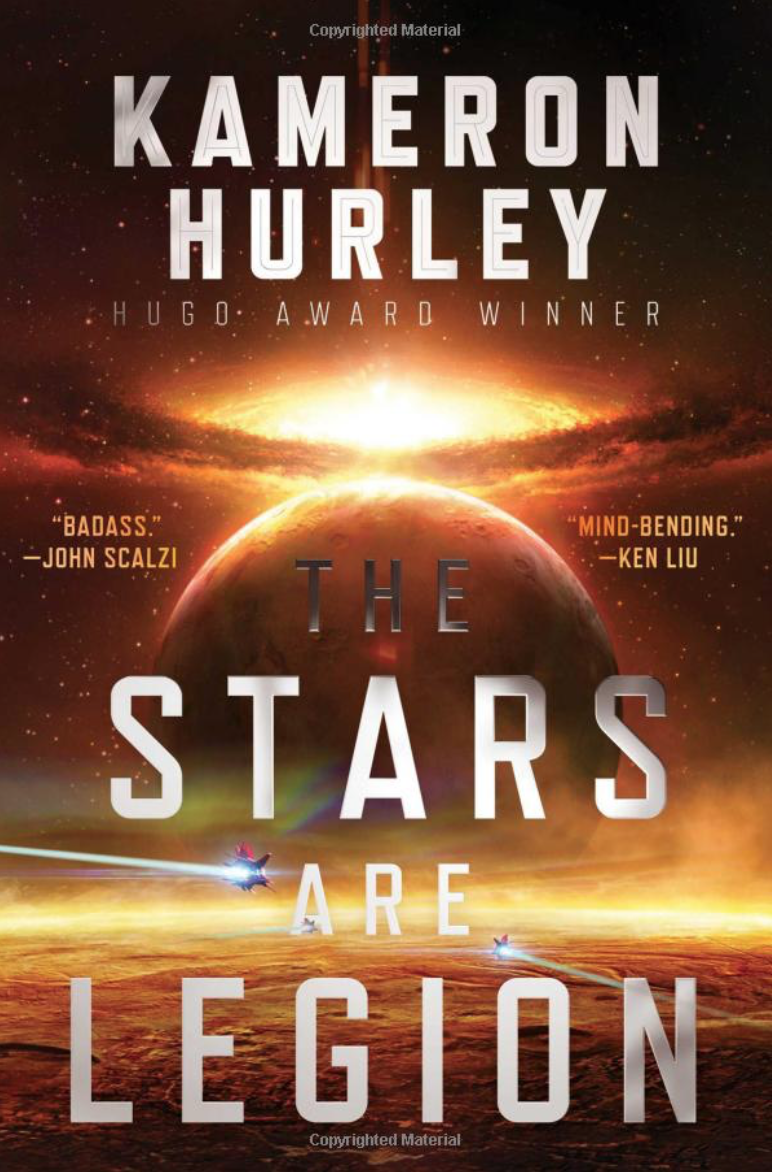