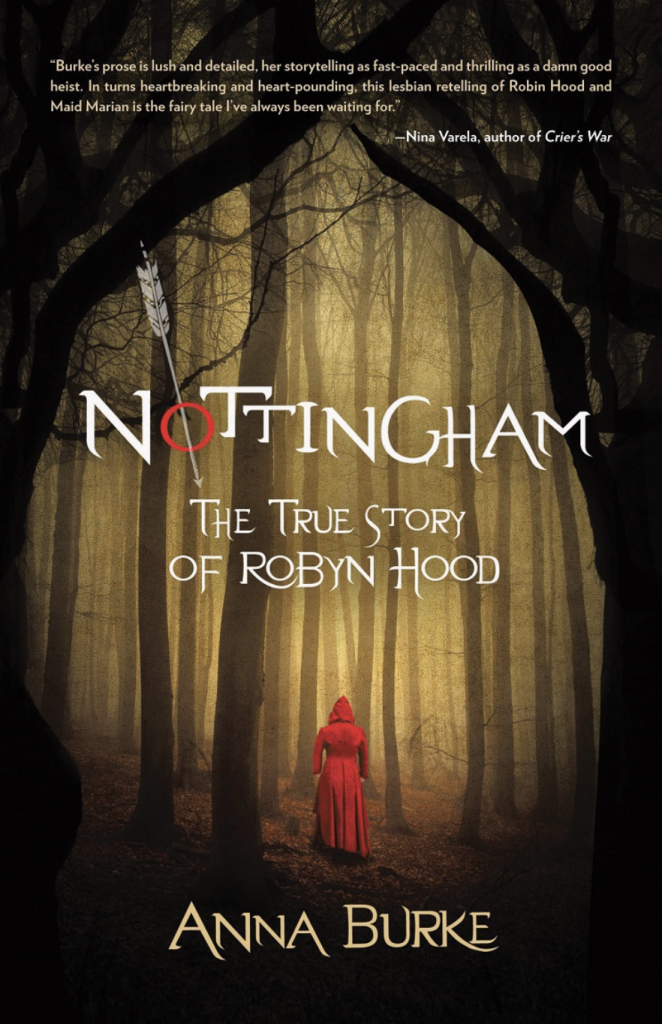 After her brother is killed for poaching in the king’s forest, Robyn takes up the role as family provider. She too is caught, and in her haste to escape must kill a man. Not wanting to bring down her whole family, she runs away to Sherwood Forest, where she meets Little John and slowly (sometimes painfully slowly) builds up a band of ‘merry men’ outlaws who, eventually, decided to take out the Sheriff of Nottingham, steal from the rich, give to the poor, etc. You know how this goes.

It’s Robin Hood, but literally every named character is queer. Most are lesbians, except for Little John, who is a trans man. The rep is great, and the ratio of men to women in this retelling is much better than most I’ve read. A+ for that, especially for how Little John was handled. I rarely see such well executed trans men in lesbian fiction.

“No,” John said. “I’m not. Call me John. That’s who I am. Forget it, as others have before you, and I’ll leave you to fend for yourself.”

“But you…” she trailed off.

Robyn hadn’t been thinking of those words exactly, but the description fit. “As strong as one anyway,” she ventured.

“That’s what my late husband called me. Joan the Ox.”

Robyn wondered exactly what had happened to Joan’s husband. John, she corrected herself. He’d said that was who he was, and it was no business of hers to decide otherwise.

Unfortunately, there isn’t much else of note in the book. NOTTINGHAM leans too heavily on Robin Hood lore, so much so that it cannot stand on its own. It takes the stock characters and gives them backstory, yes, and gender swaps, and fun adventures, but everything still feels two-dimensional. There are too many characters and side quests, which leaves the narrative long-winded and wandering. The romance between Robyn and Marian is all but lost in the story, and Robyn herself is a frustrating lead who does not drive the plot past the first few chapters. Instead, her merry (wo)men push and pull her along, or the narrative itself does, giving every chapter a slow as molasses feel.

The side characters, in many ways, are more three-dimensional than either Marian or Robyn, even though they have far fewer lines and scenes. John is amazing, and by far the breakout character of the book. Will(a) is perfect and saucy and brazen and a damn delight. Even Gwyneth is engaging, once the narrative gets going enough to let her character breathe.

Robin Hood buffs may find this book just what the sheriff ordered, but those looking for a tight, moving plot and a romance line that carries throughout will be disappointed. From reading the front and backmatter, NOTTINGHAM appears to be Burke’s first every book written (not published) and thus, the wandering and thickness make sense. Still, noting the skill the author now possesses (dear god, I will never recover from THORN), it would have been worth killing a few darlings to bring this book up to a similar quality.

Sneak into Sherwood Forest and see if Little John will let you join Robyn by buying the book here. 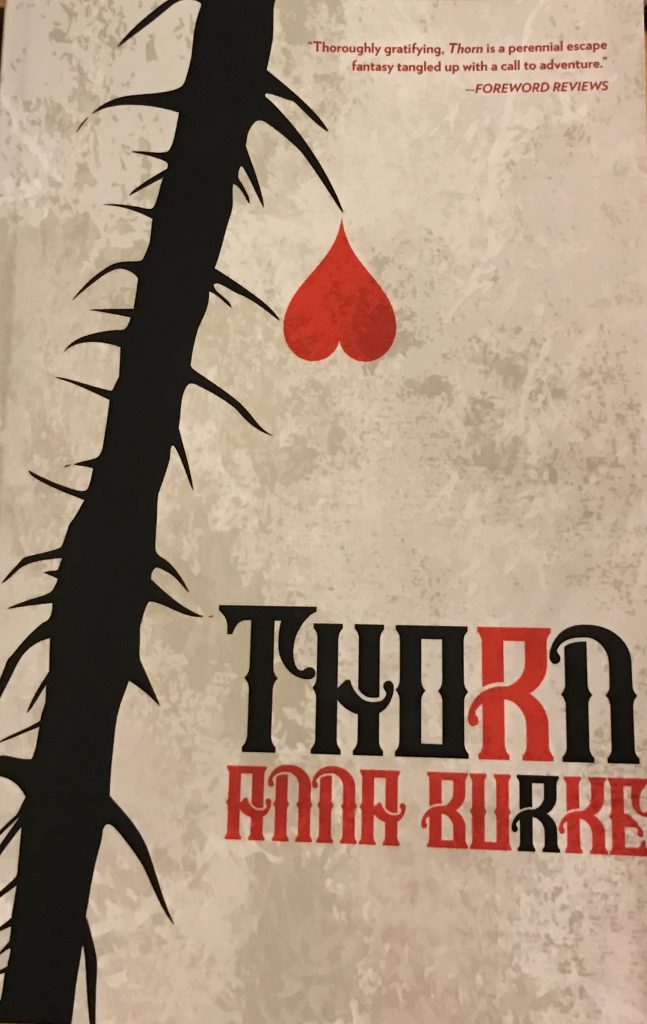 Rowan, eldest of three daughters to a widower father, has not had a good few years. Her mother had died (fairy tale trope! Take a drink!), her father’s merchant ships have sunk to the bottom of the ocean, and now she and her sisters have been stripped of their affluent city life and are being forced to make do in a remote countryside filled with bears, wolves, and a crap ton of snow.

Trying to make ends meet and get enough, well, meat, for his family, Rowan’s father joins a hunting party heading far into the snowy woods. Rowan, recently betrothed to a bland guy she doesn’t really care for, asks her father for a single rose upon his return. He does so only by stealing it from a snow-covered castle the party finds while hunting giant wolves.

Of his hunting party, it is only Rowan’s father who returns alive.

The rose is not the only thing he brings back, however. Enraged by the death of her beloved wolves and seeking her rose, the Huntress leaves her winter castle and chases Rowan’s father. She takes back her rose, but not before it pricks Rowan, leaving an icy magic deep within her. As punishment for the father’s transgressions, the Huntress also takes Rowan back with her, to live an isolated life in a perpetual winter castle.

Rowan, having now lost her entire family, must find the will to live and perhaps even thrive in her new home. The Huntress has a fabulous temper but really, Rowan has nothing worth going home to. She decides to stay and make the best of things (maybe even make out, since those hot springs are the perfect place to catch someone bathing…), even as the situation complicates itself with magical roses, evil fairies, and an ex-fianćes out for blood vengeance.

THORN is so much more than I hoped for in a short novella fairy tale retelling. Burke, known best for her lesfic debut COMPASS ROSE, writes a beautiful, breathtaking version of Beauty and the Beast. It carries all the best fairy tale tropes, sometimes borrowing from old iterations, relying heavily on the Disney version, but giving us a ‘beast’ Ice Queen whom we cannot help but love.

Rowan is driven, idealistic, strong, and heartbreakingly naive. The cursing fairy is delightfully vindictive and morally grey. The sisters are predictably divided, the fiancé channels only the best in Disney Gaston comedic evil. The narrative takes the fairy tale moral a step further than usual, and actually hangs a hat on the most obvious lessons:

I thought of my sisters and my father and the little house, a warm light set deep in the mouth of a trap I would spring no matter where I stepped. I belonged to Avery now, and if not Avery, some other man. I looked down at my body, hidden beneath my furs, and hated it. My body was the real prison, something to be bartered or sold or carried away on the back of a great white bear. This was the truth that Sara had tried to tell me, the truth I had not wanted to see, the truth that now was as clear to me as the biting cold.

In addition, the writing is gorgeous. Let’s take a minute to admire this scene, in which the Huntress is in the process of kidnapping Rowan:

My father picked up his discarded sword and charged. She knocked him to the ground with predatory ease, plucking the sword from his limp hands.

“Come with me,” she said, and her words slid into my bloodstream with the scent of roses.

“Rowan, no!” Aspen grabbed my arm, and Juniper clung to my other side, sobbing.

“I spared your father’s life once. I will not spare it a second time,” the woman said. She raised the sword, and I pushed past my sisters to stand before her, placing my hands on the sharp edge of the blade.

Green eyes bored into mine. “From you,” she said, lowering the sword, “That word sounds much sweeter.”

YES! Give me chilly power femme ice queens ANY DAY. Also from there they ride into the forest on the back of a giant bear. Come on. This is lesbian fairy tale gold.

Get on the back of a gigantic white bear and hunt your own ice queen by buying the book here.