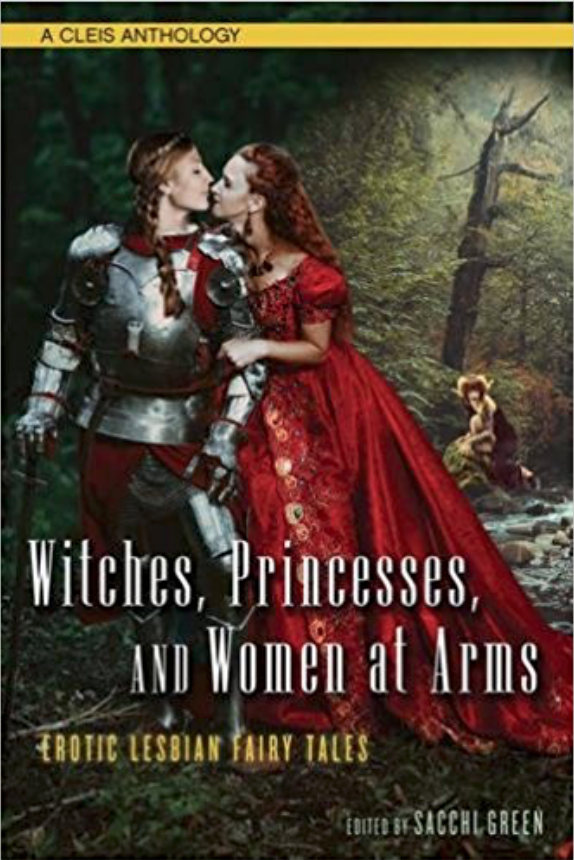 Western European fairy tales reinvented to be f/f, but with the same problematic issues with racism and objectification as the originals.

I really wanted to like this book. There was no reason I shouldn’t have liked this book, noting my deep love of both A) fairy tales and B) lesbian romance / sexy time. Books like these have a decent track record, too, from KISSING THE WITCH to all three volumes of INTO THE MYSTIC. So while yes, retelling of fairy tales with a f/f bend is not novel in the slightest, it is still a lot of fun.

Unfortunately, WITCHES, PRINCESSES, AND WOMEN AT ARMS (hereafter WPWA), was not fun.

Almost all the stories felt rushed. In the desire to have a drawn out sex scene in each (it is erotica, after all), character development was often completely ignored. Personally, I have no real interest in a sex scene unless I care about the players involved (much like with a fight scene). If I don’t care about their struggles, their passions, and their goals, why do I care what they do beneath the sheets?

In the vein of fairy tales, most of the descriptors in the book were overly purple and food-based. This was especially frequent when describing women of color, who were overwhelming described as exotic things, fruit-colored things, things to be worshipped and revered (sometimes reviled, if they were a witch), but were wholly other.

Seriously. It’s 2018. This book was published in 2017. Stop it. People of color existed in western Europe during fairy tale times, and they interacted with white people outside of ‘here is a visiting princess.’ Perpetuating this narrative has got to stop.

I was surprised by the homogeneity of the stories in this collection which were for the most part, basically forcing two women into a situation where sex was inevitable (some exclusions apply, see below for story-by-story breakdown). In KISSING THE WITCH, the authors altered the stories enough that some were not even recognizable as the original fairy tale, and others were twisted enough that I was pleasantly surprised by the ending (such as with the Beauty and the Beast retelling, which was amazing).

I was also surprised that a book published in 2017 would only include Western European fairy tales. In all of the INTO THE MYSTIC books, we are treated to a range of cultures’ fairy tales, which makes for a much more exiting read. It also meant that women of color weren’t perpetually treated as exotic beauties.

A strong start to the book, and with a decent amount of character development. I never really felt the chemistry between Sianna and the witch, but I liked the backstory and the taming of the dragon. This story suffered from cramming a big story into a small space, and I think it would have been much better served with another twenty pages.

Problematic from the start, this story lacked any real character development or plot. Noting this, it would have been better served as just a sex scene, without the attempt at plot. I was also done with it the moment our ‘dusky skinned, plum-colored nippled’ protagonist wished to look like the white love interest because she was so beautiful. There is literally a line that says “In that instant, I hated my inherited darkness…” I’ll spare you the rest.

THE PRINCESS’S PRINCESS by Salome Wilde

While I enjoyed the power dynamic in this one, I could have lived without another ‘exotic other’ trope. “…whose looks made it plain she was from a distant land.” Nope.

The strongest story in the book, and by far my favorite. A tomboy princess runs off to war to help her father, only to find her father is a terrible king and hey, witches are also pretty fun. Excellent atmosphere, good character development, and a lovely ending. This was also the only story that I really felt any sort of chemistry between the two main characters. I’d be very interested to read more from this author.

THE PRIZE OF THE WILLOW by H. N. Janzen

A sweet woman x dryad story. Not much of a narrative arc, but enjoyable and very comforting.

TOADS, DIAMONDS, AND THE OCCASIONAL PEARL by Emily L. Byrne

This one just seemed to wander a bit much for my liking. The premise of a princess questing to make her own destiny, and running into another princess doing the same (and breaking a curse), is solid enough ground, but the execution seemed lacking. I had a hard time finishing this one.

A first date between Cinderella’s wicked stepmother and her fairy godmother. Great premise, and very unique writing style and voice. It was denser than I’d thought, so a bit hard to get through, but I really appreciated the quick. This story stands out in the anthology as by far the most unique.

THE MARK AND THE CAUL by Annabeth Leong

This was another of my favorites. Excellent worldbuilding. The character development was a bit rushed, but I liked the destiny trope and Sam, the plodding, do-good protagonist. The princess was also a lot of fun, and I do like that her (very) risky scheme to save Sam works out well in the end.

The modern-day retelling of Rapunzel had a lot of good bones, but it never really fleshed out. The homages to the Disney version kept pulling me from the narrative (our heroine is ‘Bren Ryder’), and I didn’t understand enough about the magic involved to feel like the Rapunzel character was ever truly trapped. The story also lacked any real chemistry between the characters.

A Rumplestiltskin retelling without much changed except the gender of Rumplestiltskin. Nothing much of note with this one. It failed to capture my imagination, but neither did it make me angry, either.

I was confused for most of this story. Having now read it twice, I’m still not quite sure what the character arc is supposed to be. There’s some character chemistry, but the world and character building seem flawed. I think this is another story that would have benefitted from another fifty or so pages.

I DNF this one. I just couldn’t get into it and honestly, I was kind of tired at this point in the anthology.

THE SORCERESS OF SOLISTERRE by Lea Daley

An interesting romance between a bisexual queen and a white witch. I enjoyed this one, especially the turning of one of the suitors into a rat, and would have loved if this was about thirty pages longer, to really give it some meat.

Overall, while the quality of writing in WPWA was higher than the INTO THE MYSTIC books, and about the same as KISSING THE WITCH, it suffered from too much homogeneity and some outdated (and highly problematic) writing styles. Still some of the stories were well worth the read.

You can buy WITCHES, PRINCESSES, AND WOMEN AT ARMS in paperback here and ebook here.