Warnings: a hard scene where a jerk reporter pressures Princess on her assigned gender at birth. Handled very well, but may be hard to read for trans readers 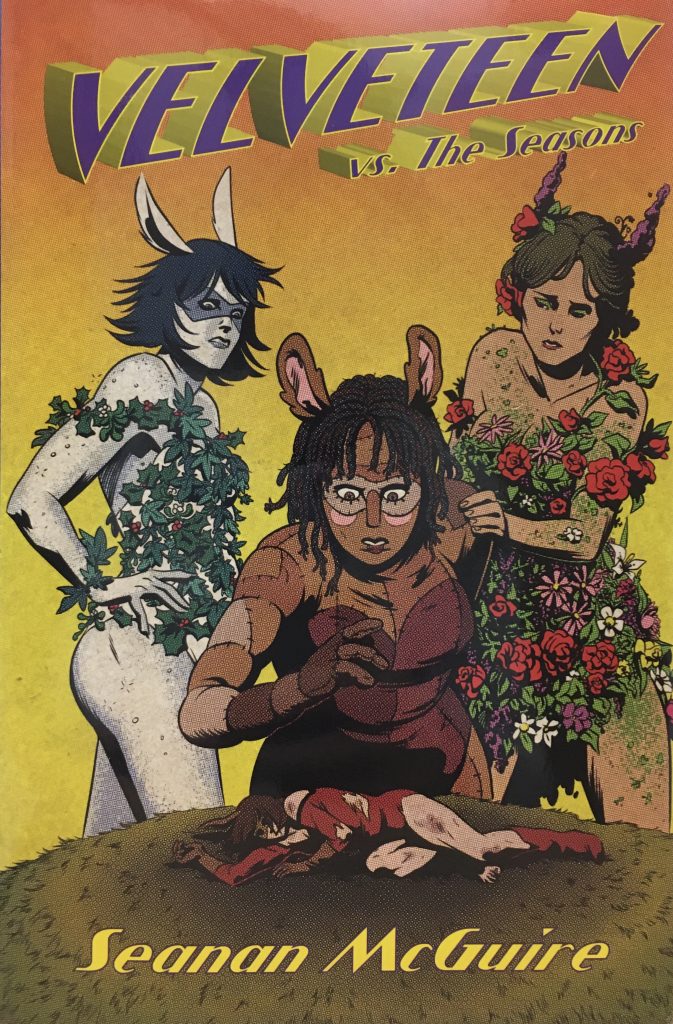 In VELVETEEN VS. THE MULTIVERSE, Vel strikes a deal with Santa and the other seasonal spirits in order to get a time do-over from her (more or less) successful attempt to overthrow the Super Patriots.

The deal, of course, came with a heavy cost. Vel must now spend time with all the seasons (except summer, which doesn’t have much interest in her) and allow them to attempt to woo her to their cause. If she declines all of them, she goes back to her reality. If she accepts one, she stays in that holiday, forever.

Thus begins the final installment of the Velveteen books, where all of Vel’s chickens come home to roost and the reader gets a very, very deep look at the magical systems behind Santa Claus (winter), Halloween (autumn), and Persephone (spring). The end of the book wraps up the series nicely, with Vel making her choice and the reader getting to see how the ripples of that choice affect all the superheroes they have come to know and love.

What is most interesting about this book however, is how it looks at the rise of governmental legislation in the void of the Super Patriots Inc. While the seasons are intriguing and Vel’s trials entertaining and have the signature harshness of McGuire worlds, the social commentary on the grey areas inhabited by large corporations is the most critical piece to this book. While the Super Patriots, Inc., was responsible for a whole host of violations and moral failings, it did keep the government at large out of the legislation business when it came to superheroes.

She’d read most of the superhuman control legislation, the things proposed by frightened senators who wanted to protect their larger “normal” constituents; the somehow more terrifying things proposed by politicians who were virtually salivating at the idea of living weapons who carried no development cost, who would do as they were told and make “friendly fire” a thing of the past.

In that vacuum, the United States has taken up the legislation game. Readers get to watch the slow slide from what seems a ‘reasonable’ law to what is a clear grab of power and/or fear. The changing political climate over the three years Vel spends with the seasons adds an additional string of tension to the stories, pulls them together, and serves to further entrench Vel into our hearts.

This is not to say that Vel’s time in the seasonal lands isn’t engaging. Her first stop, Winter, is heartbreaking in the best and worst ways. In the previous two books we have seen Vel’s close attachment to Santa Claus, his role as a near father figure, the warmth she gets from her friends there and how she had used Winter as a tether during her time with the Super Patriots. Hence, returning to Winter not as a visitor but as a resident emotional destroys Vel and the reader at the same time–seeing the cruelness of Santa, of the other holiday spirits, of how they need Vel so they must use Vel, despite their fondness of her.

On a more uplifting note, everyone’s favorite lesbian couple does feature again in THE SEASONS, though not as prominently as in book two. But the friendship that grows between Vel, Princess, Jack(ie), Polychrome/Sparkle Bright (or whichever code name you prefer for her), and Victory Anna is everything one wants in found family, especially superhero found family.

The emotional conclusion to the Velveteen series is more than worth the cost of admission, even if you have to scour the internet to find copies to buy. Lucky for you, Vel visited from her Earth to let you know that you can buy the hardback here.