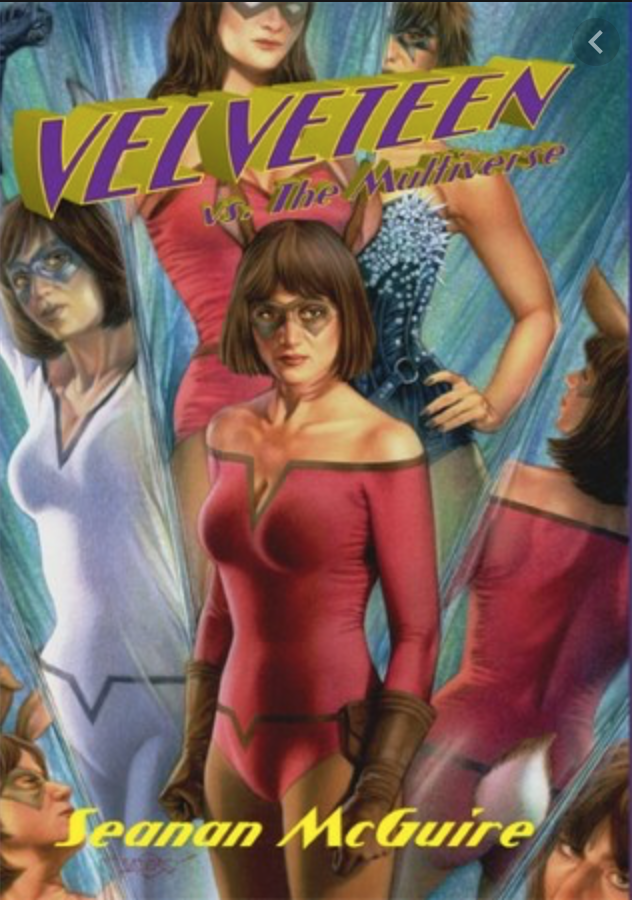 Settled now in Portland, Oregon, as the resident crime fighter, Velveteen almost has her life together. She has a cute superhero boyfriend, a new superhero friend, and a host of low-level villains to fight.

It all goes horribly awry, of course, when Vel wakes up in bed with Action Dude, her childhood crush. In bed. Married. And officially part of the Super Patriots, Inc.

Thus begins Vel’s journey through the multiverse. As with any good superhero story, long-hidden truths get revealed and Vel attempts to right old wrongs (she is a superhero, after all) and bring down the Super Patriots, Inc., once and for all.

Nothing comes without a cost, however. When one evil falls, another rises, and the destruction of the Super Patriots comes with an unimaginably high price tag.

VELVETEEN VS. THE MULTIVERSE is the strongest installment in the Velveteen trilogy. It is also the installment where we spend the most time with Sparkle Brite aka Polychrome, and see part of her romance with Victory Anna (a steampunk refugee from an Earth that never really existed, but who really has the hots for Yelena).

“Torrey’s very tea-oriented,” said Yelena, as she walked Vel toward the kitchen. “She’s from an alternate Victorian England that ceased to exist in a freak accident involving a time machine and a blackcurrant trifle. After spending a few years stranded in parallels without other people, she got very focused on the important things in life.”

“Tea, and shooting people who bother my girlfriend,” said Torrey, walking over with a tray.

It’s also the installment where we learn the full breadth of Vel’s powers and the extent to which the Super Patriots went to hide Vel’s potential from her. It’s a story with an amazing number of twists and turns, filled with robust characters, history, and so, so much comic book lore. Santa remains as concerningly creepy/loving as ever, Princess continues to enchant with her rodents that sew clothes and enchanted mirrors and be the best trans rep: “My name is Carrabelle Miller,” said Princess. “If you want to know what my parents called me, then you’re looking for Scott Miller. But that’s never been my name.”, Yelena’s character development turns her into my hands down favorite character, and Victory Anna is an absolute delight as an additional character who can turn anything into an explosive weapon. Anything.

There’s a final battle that feels satisfying, but opens more doors than it closes. There are promises made that hurt more than they heal, and tragic romances (no gays are harmed). Most questions are answered but in doing so, we lose the structure of our world. Was it worth the cost? We won’t find out until book three: VELVETEEN VS. THE SEASONS.

You can join Vel and her misfit superhero league in paperback here and on audiobook here.

P.S. This is the volume where McGuire finally has Vel use My Little Ponies in battle. This is the book of my soul.

A herd of brightly-colored plastic horses came stampeding out of the alley, each carrying one or more toy soldiers on its back. Rainbow manes whipping in the wind, they circled the woman in black, and the soldiers opened fire.