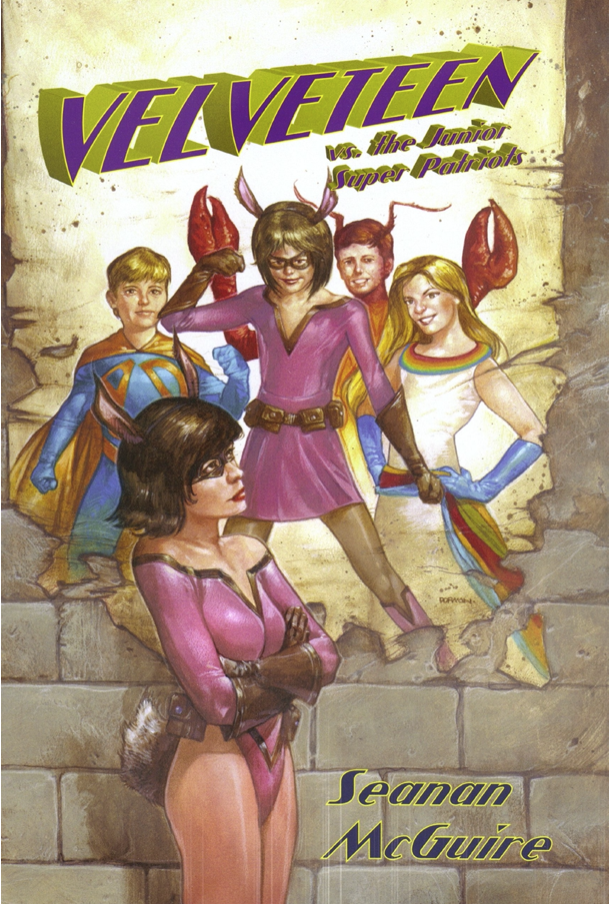 At twelve, Velma Martinez manifested the ability to animate toys. Her parents, previously borderline negligent, sell Velma to the Super Patriots, Inc., to be trained as a super hero.

In Velma’s admittedly limited experience, “family fun” usually meant “Mama cries herself to sleep after Daddy passes out run, and Velma and the teddy bears clean the whole placed before morning.

The contract stipulates training until eighteen, at which point Velma (Velveteen) would get to chose to stay with the Super Patriots and become a fully fledged super hero, or return to a normal life.

No one ever leaves the Super Patriots, Inc.

Velma says good bye around nineteen, shucking decades of Marketing brainwashing and severing her few remaining friendships. She can’t hold down a job, however, or get into college, or do anything except hide her powers and hope the Super Patriots don’t find her.

Years later, an unfortunate encounter with some coffee worshipers in a small town force Velveteen to use her powers in public. The Super Patriots immediately try to bring Vel in, by dubbing her a super villain. Vel, of course, is having none of it, and with the help of a bunch of cast off toys, manages to make it across the border to Oregon.

Oregon doesn’t have a super hero extradition agreement and the governor hates the Super Patriots due to the untimely death of her super hero sister, who was sent on a deadly mission far too young. The governor grants Vel a superhero license so she can fight crime within Oregon’s borders, which also, conveniently, keeps her out of the Super Patriots hands.

The Super Patriots have plans, however, and will not give up until Vel is back under their control, one way or the other. They’ll use any thing or any one under their power to get to her, including her ex-best friend (Sparkle Bright) and ex-boyfriend (Action Dude). Vel has friends of her own, however, including a new boyfriend, holiday superheroes, and a mysterious new superhero who manipulates light.

A battle between good and evil lurks on the horizon. Will Vel and her friends be enough to stop Marketing? Will Vel ever get rid of her domino mask? Who is this mysterious new super hero??

VELVETEEN VS. THE JUNIOR SUPER PATRIOTS is both fun and serious, whimsical, joyful, and cruel. Working off the premise that super powers have always been among us and it is only a recent upswing in occurrence that has lead to a need for corporations and governmental control (all due to a large batch of irradiated maple syrup, apparently), McGuire shows us a world not dominated by epic battles between super heroes and super villains, but by kids in goofy spandex costumes and the corporation that would control them. It pairs bunny costumes, talking toys, lobster boys, and witty dialogue, with the brutal truth of marketing, child labor, and child exploitation.

“KICK THEIR ASSES!” shrieked Velveteen, who, after a long day of driving, detours, and idiots, was glad to finally have something to smash.

“DO YOU OPPOSE ME?!” demanded The Claw.

“Oh, David.” Velveteen sighed, and slapped her palms together over her head. “Grow up.”

And that’s when the bear-shaped bouncy castle kicked his ass.

VELVETEEN carries all the classic super hero tropes–calling them out, naming them, integrating them–and then in a very McGuire fashion, turns them to her own use. The goofiness of super hero names (what will poll well with the public?). The reasons for the constant outfit changes (more opportunity to buy toys!). Why the goofy poses (learn to strike your best pose on your best side, for the constant media!).

Throughout all of it is Vel, former child superhero, now emancipated adult, who just can’t get her life together. A child star with no future, but an (adorable?) ability to bring ratty old teddy bears and such back to life. Vel is instantly relatable and instantly charming, and it is impossible to not get swept into a world that feels so similar to our own–almost certainly because McGuire stuck in just enough truth that every action sequence, ever emotion, every silly costume, resonates.

If you ever had a toy you wished would come alive and play with you, you need this book.

If you ever looked at a washed out child start and wondered what happened?, you need this book.

If you really love superheroes, you need this book.

To begin your training with the Super Patriots, Inc., you’re a bit SOL. These books were print only and a limited run. Book one is sold out but available online for free.

Click to read the reviews for books two and three.

Genre: fantasy: classic retelling Pairings: f/f  (not the lead though, as far as I can tell) Queer … END_OF_DOCUMENT_TOKEN_TO_BE_REPLACED