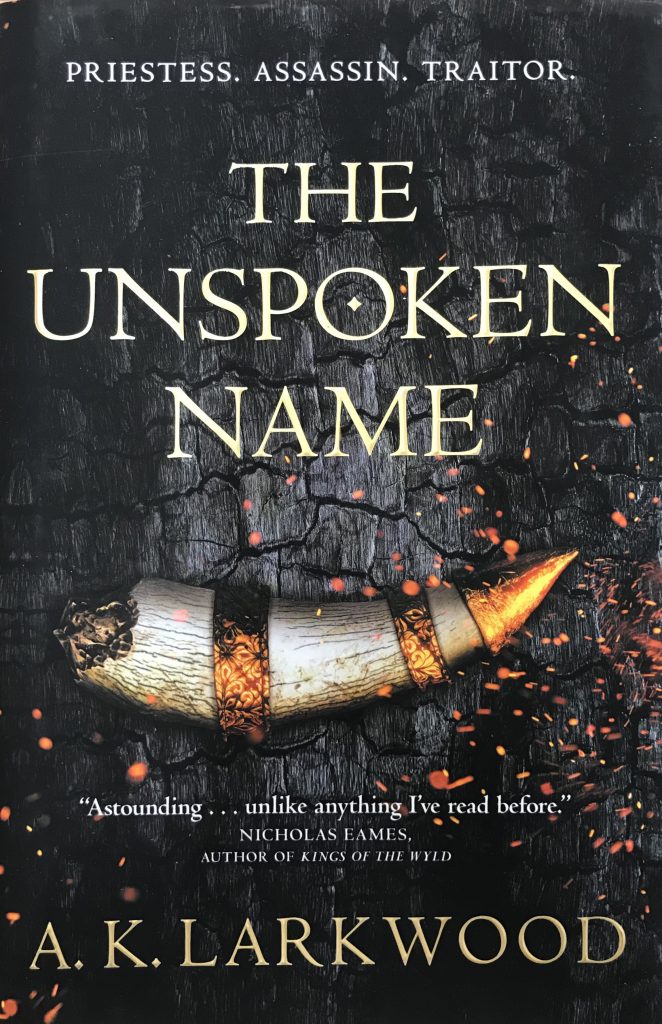 Csorwe was raised from infancy to be a teenaged sacrifice to a living god. She never fought it, never thought much about it, until the day of her death. Waiting in a cave for her god to devour her, an unexpected mage shows up and offers her a new future – one filled with magic, and spying, and killing. In this new future, Csorwe wouldn’t be the one who dies.

She accepts and is thrust into a wide world of politics, magic, and intrigue that, as a sheltered sacrifice, she finds overwhelming. The mage trains her and pays her a reasonable wage, but it is not long before Csorwe begins to wish for her own future, not one, once again, dictated by an adult. Her missions become more dangerous, old mentors return to haunt her, and love strikes in the most unlikely of places. By the end of the book Csorwe must choose love over the life she’s worked so hard to build, and learns that she will never truly be rid of the god she left behind.

Also, there’s a whole to do about a reliquary and eternal life and mentors battling mentors and you know how it goes.

If you’re a lover of high fantasy, this is your book. It has a epic reach reminiscent of THE TIGER’S DAUGHTER, with more straightforward prose and less romance focus. Csorwe makes a complete evolution from naive teen to capable woman during its course. Her friendships are brutal, honest, and messy. Her romance is messy. Like, lesbian messy. She fights her mentors, her mentors fight her, she seeks a place in the world that is wholly her own, etc. UNSPOKEN is very much a coming of age book, taking our modern pitfalls and embedding them in fantastic settings.

Betrayal? Oh god. So much. Betrayal and hard choices. Like, should she chose to get the reliquary her master wants, or save the girl?

Bad news and bad luck swam around the Reliquary of Pentravesse like flies around a carcass. This could have been bad news, bad luck, or something else.

Csorwe leapt away from the falling rock and saw Shuthmili. She lay motionless, unconscious, her bare hand uncurling beside the toe of Csorwe’s boot.

And once again, everything was very clear. Csorwe picked Shuthmili up, hoisting her over her shoulder. She let Oranna and the Reliquary go, and she ran for her life.

Also there’s just a ton of queer rep in this book. Our other POV character is a gay man…a snarky gay man:

Tal had never been any good at trigonometry or rhetoric or any of the things you were supposed to be good at. He didn’t have magic, as his mother had hoped he might. But he was pretty good at creeping, lying, and stealing, and Sethennai seemed to value him for it.

“Looking for you, obviously,” said Tal. “The only reason they didn’t put me on trial in Qarsazh instead of bringing me back is because I took their side at the Lignite Spire. They think Sethennai sent you on purpose to suborn their Adept. And, well, let’s be honest, I saw how you looked at her. You would’ve suborned her like that.”

“Yes,” he said, the words willing up all at once. “No. It’s fine. It’s all I’m going to get, so. It doesn’t matter if it’s not enough, and I’m happy with it, so it’s none of your business, and anyway–” Tap realized with distant, wondering horror that he couldn’t stop himself saying it. “And anyway, I love him and there’s nothing I can do about it.”

And of course, there is classic lesbian banter (classic anyone banter, really)

“Are we just going to take it?” said Shuthmili, though she didn’t hesitate to climb into the barge.

“Didn’t they teach you how to steal a ship at wizard school?” said Csorwe.

Csorwe realized, now–and in fact she must have been pretty dense not to see it before–that Shuthmili was unspeakably beautiful. That everything about her was perfect and that it would be worth doing almost anything to coax a genuine smile out of her. Csorwe lay still where she had fallen, lightly stunned.

“Is something wrong?” said Suthmili. She brushed her hair back out of her eyes in a way that made Csorwe want to take her face in both hands and kiss her.

“No,” said Csorwe, pleased with herself for how impressively normal her voice still sounded. “I was just thinking.”

“Oh, do tell me how that goes,” said Shuthmili. “I’ve heard it’s not as good as people make it out to be.”

THE UNSPOKEN NAME is a delight of epic fantasy–a bit long in the tusk in some places but otherwise perfectly rendered. The cover is gorgeous, the characters deeply three dimensional, the dialogue almost an art. There’s moral grayness and coming of age and romance and betrayal and angry, vengeful gods. There’s training montages (you have to supply your own music) and creepy, lurking scenes, and Deeply Unsettling Looks and unrequited love (the m/m line).

Buy this book. You need this book. It’ll look pretty on your bookshelf and you can defeat some old gods and maybe get a chance at eternal life.

Genre: fantasy: classic retelling Pairings: f/f  (not the lead though, as far as I can tell) Queer … END_OF_DOCUMENT_TOKEN_TO_BE_REPLACED