note: this is a review for the second book in the series. To read the review for book one, click here.

Warnings: use of the word ‘hermaphrodite,’ dehumanization of intersex creatures 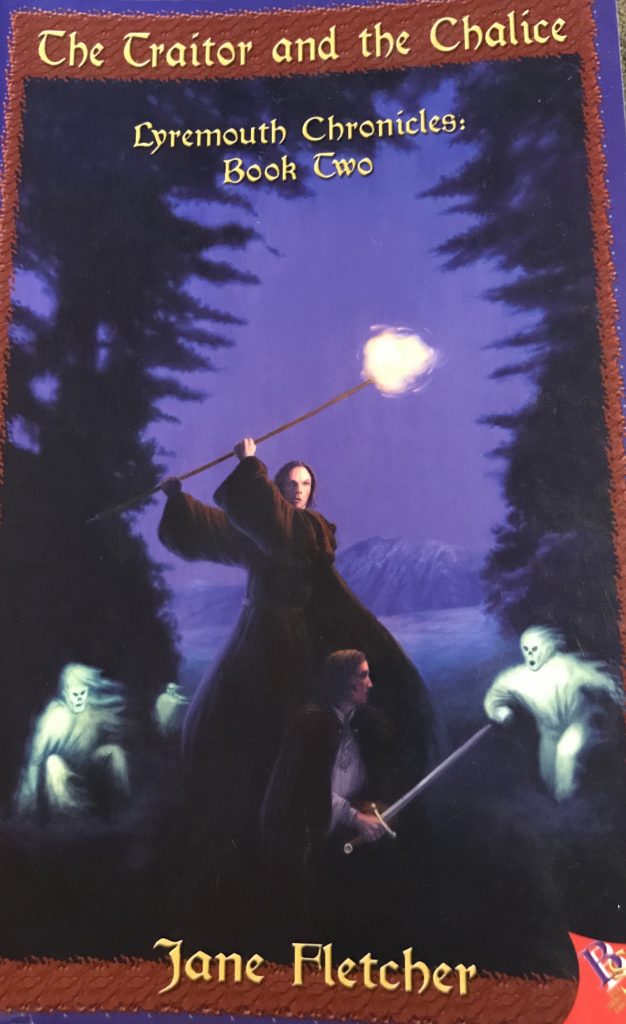 Tevi and Jemeryl are are back in search of the chalice that will allow Tevi to return to her homeland and allow Jemeryl to uncover the sorceress traitor that is trying to destroy the Protectorate of Lyremouth. Along the way Tevi must confront her fears (and society’s bias) about being a commoner partnered with a sorcerer, and she and Jemeryl must rely on each other’s strengths to take back the chalice from Lorimal, and return it to its rightful owner.

Generally speaking, I enjoyed THE EXILE AND THE SORCERER, the first in this series (though the cover is so awful I gave the book away. I didn’t want it on my bookshelf). The cover of THE TRAITOR AND THE CHALICE is no better, but unlike its predecessor, this time the story doesn’t make up for it.

We’re thrown right back into the thick of things in book two with no attempt to create a unique story arc for the book. There is no character building and no real role of secondary or tertiary characters except as cardboard cutouts.

The book’s main purpose seems to have been getting Tevi over her confidence issues–being a non magical person dating a magical one is tough, and society doesn’t care for it.

The book is over 300 pages of Tevi and Jemeryl walking around, talking to people in bars, and having lackluster conversations with other sorceress. It lacks the unique worldbuilding of the first book (we are well off Tevi’s island for all but the last five pages), it lacks any sort of sexual or romantic tension (the main pair are already together and don’t really spark anymore), and even though the duo recover the chalice, it seems a foregone conclusion and too easy.

There is no real pain or suffering for Tevi and Jemeryl, no insurmountable hurdles they must face together that would further spark their relationship. There are a lot of conversations, and a few nice make out scenes, but nothing ever seems to happen. Even Jemeryl’s capture and enchantment, where she is forced to eat poisoned berries, holds no real tension as the reader is in Jemeryl’s POV at the time.

Compounding the dragging pacing yawn-inducing plot, the real tension–from Tevi returning to her island a hero with the chalice, is relegated to a few back pages. We don’t get any sort of fanfare with her arrival, or reckoning with her family, or to see the shocked faces of the people who exiled her. Reader expectations here were not met, as Tevi’s return home was the one tension point that kept me wading through an otherwise unmoving plot.

And, whether a victim of the decade it was written (2006) or just the author’s ignorance, the intersex dwarves in the narrative are referred to as ‘it,’ which is a particularly dehumanizing pronoun, made worse by the main characters giving it to them. I almost put the book down from this section.

“All right, they’re dwarves. But at least you can be sure they’re male.”

“Actually, you can’t Dwarves are hermaphrodites.”

“I’ll admit most people get confused by the beards. But technically, all dwarves should be referred to as it, rather than he.”

Those who loved THE EXILE AND THE SORCERER may enjoy the sequel, but only if their investment came solely from the relationship between Tevi and Jemeryl. The worldbuilding, plot, and pacing in THE TRAITOR AND THE CHALICE leave much to be desire.

Still, you can join the hunt for the chalice by buying the book here.