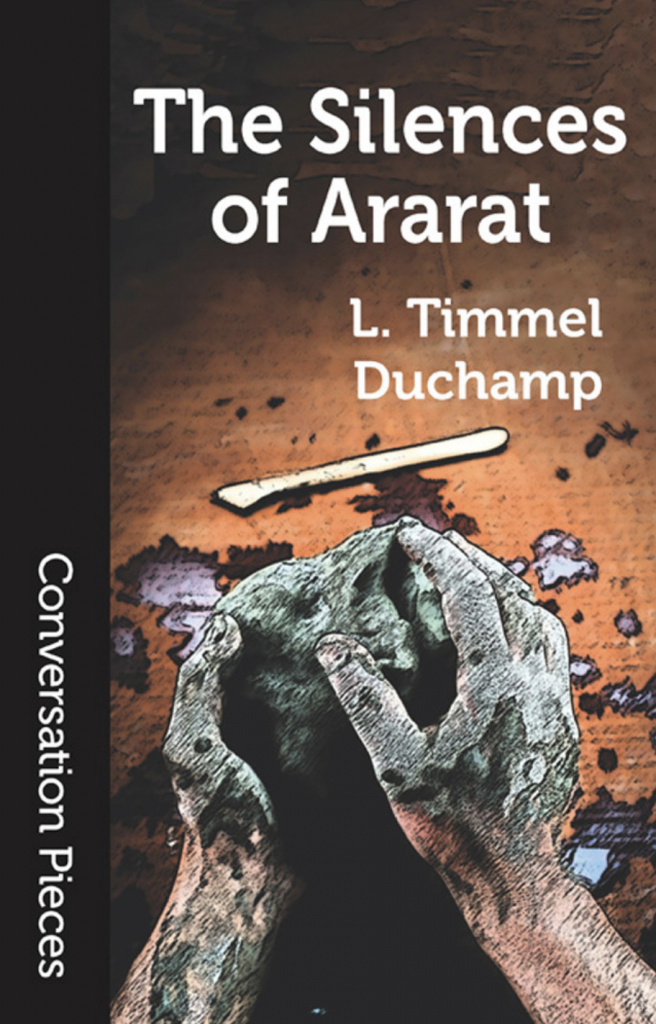 Paulina is a sculptor in a sort of THE HANDMAID’S TALE type dystopian future, where the ultra conservative faction of the USA has splintered off (Congress of Christian American States), elected a king, and follows ‘Christian’ teachings. Her husband, the king’s advisor, has gone missing and is presumed dead, leaving liberal Paulina only her sculpture by which to show her dissent.

Queen Hermione is everything a conservative king could want – beautiful, kind, doting, and able to hang on his every word without punching him in the face.

I have to admit, the branding of her image, combining “white” purity with womanly fecundity, revolted me. In person, though, I barely noticed it, distracted by the glimpses I began to see of an intensity I’d never before noticed. Those glimpses intrigued me. Maybe, I thought, there was something below the surface of wifely perfection composed of expensive grooming and constant deference to her husband and his most trusted advisors. Hermione was, after all, an actor. It was just possible she was consciously playing the role of the young third trophy wife and not merely following the script without noting she was doing so.

The king’s paranoia drives him to eventually accuse Hermione of adultery with his brother, and the ensuing trial and altercations result in the deaths of her two children and, as far as the public knows, of Hermione herself.

Paulina is the rescuing sort, turns out, and through using her innate magic to turn living things into sculpture, she fakes Hermione’s death, rescues the queen, and sequesters her in her own house. Romance blooms, the two women plot a delicious revenge on the king, and general emotional turmoil ensues.

The thought of her life as one of unending loneliness made me want to cry. “For godlike, love. That’s not what I meant when I talked about your needing to be strong.”

She took my hand and brought it to her cheek. “You are so good to me,” she said. “Better than I deserve.”

In that moment, Hermione’s entire attention was fixed on me in a way I hadn’t before experienced. The intimate intensity of her gaze kindled a dozen small flames licking at my skin that the sensation of my fingers on her face fanned into a blaze. To conceal what I was feeling, I pulled her close in a hug. “You don’t deserve to be lonely,” I said. “You don’t deserve to be abandoned.”

I began to pull away, only to be engulfed in confusion as her lips nudged mine and her fingers stroked my neck, feeding the conflagration of my most sensitive nerve endings. I had thought my sexuality desiccated and frozen, my heart petrified into stone. But my heart now beat so powerfully that I was suggested with heat, and the pulse in my vulva beat so strongly that I could no longer think.

Out of all the Conversation Pieces by Aqueduct Press that I have read, THE SILENCES OF ARARAT is definitely in the top five strongest installments (nothing will ever evict any of the Lucy Harper books from my heart, and the one about the girl journeying through the underworld still makes me smile). The narrative is strong and tight, with little fat and solid character development. The author spends enough time developing Hermione and the king that, when the inevitable betrayal occurs, it is both expected but still heart wrenching. The slow build up to the revenge, coupled with the romance arc, made the book a quick, delightful read.

The nonlinear narration did make the first half of the book confusing, though its a novella so the confusion was short lived. By the end of the book I didn’t mind it at all, although it makes me unlikely to reread.

For a fun dystopian with a satisfying revenge plot, you can join up with Paulina and Hermione to take down the king by buying the book here.