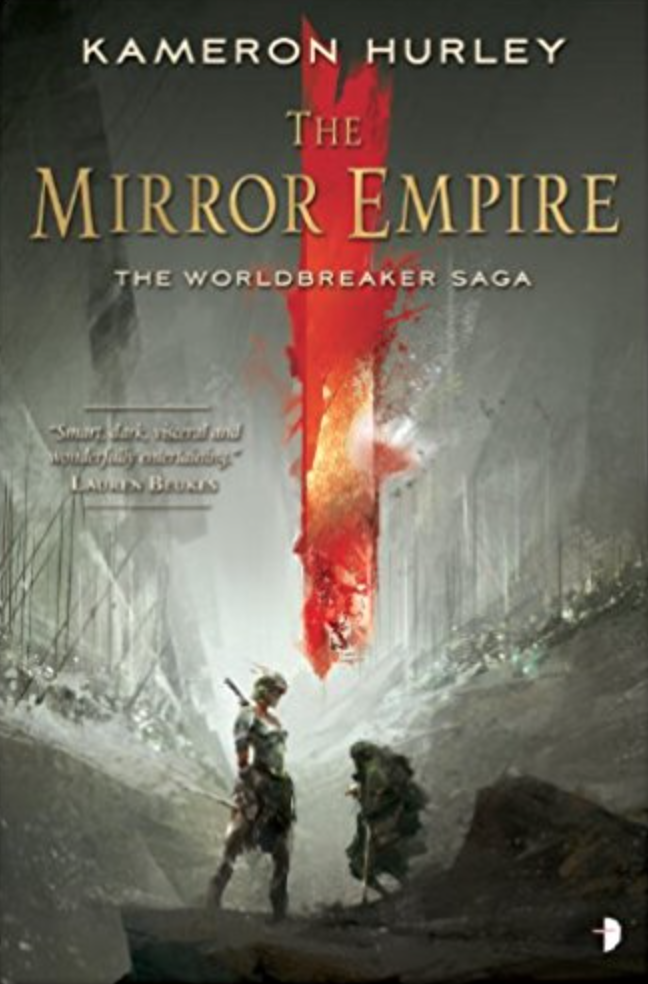 On the eve of a recurring catastrophic event known to extinguish nations and reshape continents, a troubled orphan evades death and slavery to uncover her own bloody past.

There’s more to the back blurb, but the above is the A plot line, and the one with the most depth, IMO. As with most modern epic fantasy, we are exposed to a staggering number of POVs. While I delighted in every moment of the worldbuilding in this book, especially in the queer representation, the volume of characters and their (general) lack of significant growth had this book feeling more like the wanderings of George R.R. Martin than the dynamic head hopping of the Mistborn books (well the first three, anyway).

So let’s start with what I loved.

I had no idea how to even process the start of this book. Queer characters are everywhere. In fact, I’m not certain anyone is straight in this book. Lilia, our orphan girl from the blurb, has two romantic arcs with women. Roh, a minor POV character, has relations with men. There’s an assassin, another minor POV character, who is an interesting variety of intersex in which his sex actually changes by season. Some countries have five genders (assertive male, passive male, assertive female, passive female, other, although these aren’t the titles they’re given), and people are allowed to pick which fits them best. Some people are flat out gender fluid, some have ambiguous genitalia (I think? There’s some vagueness here). Queer relationships are onscreen everywhere, and no one thinks its weird at all.

The concept of the mirrors and alternate dimensions is pretty standard across portal fantasy, but this takes the genre into high fantasy and wow, does it do it well. The viciousness of the landscape, the colors of the sky, the hopelessness of some of the people, the rage of others, it all blends perfectly into a world you could drown in.

I was engaged as well by how smoothly the author transformed standard fantasy tropes on their head. The saturation of females over males in the narrative, especially in the backdrop characters, the casual in-world rapes and power struggles, the sort of casualness of it all, the this is just how it is, served as a poignant reminder of how ridiculous epic fantasy often is. By turning the gender ratios around, Hurley manages to make an effective example why gender ratios matter, especially with background characters. Where were all the men in these worlds? Don’t know, don’t care, this isn’t their story. Don’t like it? Maybe you should look at why that is.

With all that praise out of the way, let’s get to issues.

At it’s most basic level, the characters developed. They grew up, they learned, they met new people and engaged in battles and magic and whatnot. At a more interpersonal level, we never spent enough time with any one character, never got enough real internal monologue or motivation from any one character, to really see substantive growth. The only character I ever got emotionally attached to was a minor POV character–Zezili’s husband–and his entire purpose in the narrative appeared to be titilation and social commentary. He was the only character with real emotions though. Even Lilia, our primary protagonist, failed to really engage throughout the book. Her early chapters are a reasonable hook, but the middle of the book has so much, so much POV shift that not only is it hard to keep track of who is who, but it’s hard to stay connected to any character long enough for a POV chapter of them to come back around.

Reading this book reminded me of the first time I picked up an Anne McCaffery Pern book. I didn’t know where to start so I just grabbed one and started reading. There were so many words I didn’t know, like klah, and I thought I’d never sort everything out. I did though, by about halfway through the book. Mirror Empire has to be, what, five times as long as that first McCaffery novel I read, and by the end of it there were still words I didn’t know the meaning of, and character names I had to go…wait, who is this again? There’s a glossary at the back, which includes a dramatis personae, but I hated going back to it every fourth word. There was just too much in terms of names for me to keep straight. I’d probably have been fine if I took notes, but I hate taking notes.

In general, this book really scratched my ‘epic fantasy’ itch for the year, and I’ve got no complaints as far as queer rep goes. I wish I could have connected with one of the primary protagonists more. Of the main three–orphan girl Lilia, ruthless killer and domestic rapist Zezili, and Ahkio, the dead kai’s brother–Lilia was the most interesting. Her later chapters moved her into the same sort of hard emotion of Zezili though, and I lost interest. Zezili herself seemed human only when thinking of her husband (which is all sort of messed up, since she kept him basically as a sex slave), and Ahkio I never cared for.

Lovers of large cast epic fantasy, dark epic fantasy, and anything even remotely similar to Game of Thrones, will enjoy Mirror Empire. The book is a lot darker than the epic fantasy written by Sanderson, however, so those wanting cleaner, lighter epic fantasy should probably pass.

You can buy THE MIRROR EMPIRE in paperback here and ebook here.