Queer Representation: cis lesbian (? could also be bi or pan, not stated explicitly)

Warnings: It’s 414 pages and I read it in one sitting because I was scared shitless. You were warned 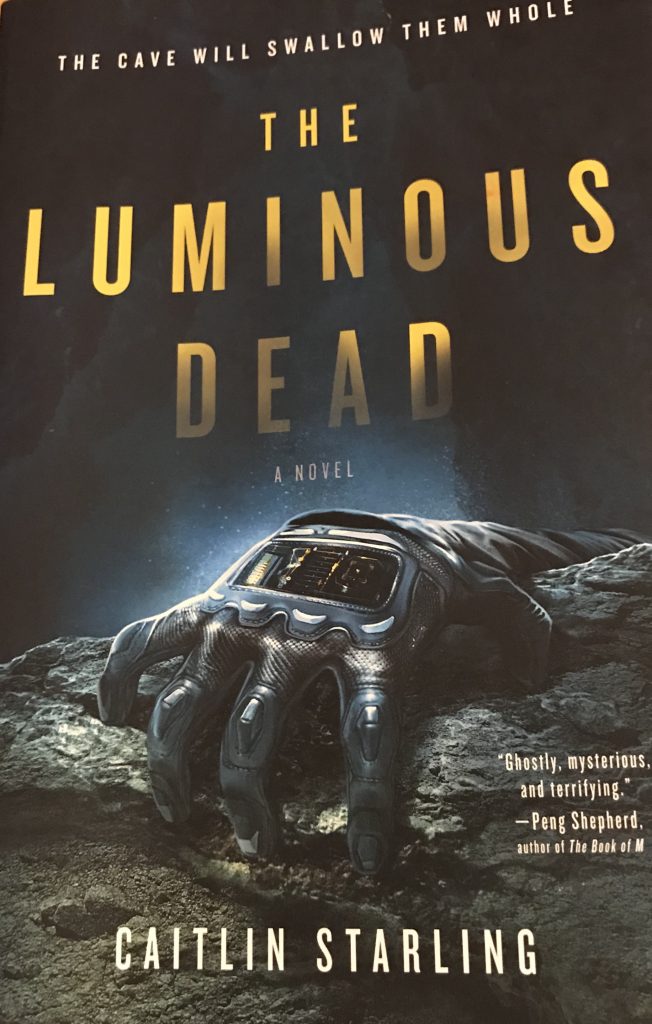 Gyre Pierce lives on a crapsack planet run by mining conglomerates. The only real resource are ‘minerals,’ which are buried deep in underground caves scattered across the planet’s surface.

Going into the caves is not an easy task, unfortunately. Alien creatures known as ‘Tunnelers’ kill Cavers at an alarming rate, making cave diving a dangerous–and lucrative–job.

Enter Gyre. Abandoned by her mother and desperate to find her, Gyre falsifies her credentials to take on a high pay and ultra high risk dive. If she survives, she can move to any planet of her choice immediately (and she’s going garden world all the way). If she dies, well, at least she isn’t living in a land of caves and mommy issues anymore.

Gyre expects a crew to assist her remotely, watching while she sleeps and monitoring her vitals in her high-tech Caver suit. What she gets is Em, the solo funder and solo tech operator of the expedition, taking way too many choices out of Gyre’s hands and leading her on a seemingly endless descent down into the bowels of the planet for a reason Em won’t say.

The credits, a chance to find her mother, drive Gyre to keep pressing on. But the Tunnelers are getting close and there are too many bodies in the subterranean caves for Gyre’s liking. And Em is irritating. Really irritating, and makes morally dubious choices, like injecting drugs into Gyre’s system without her consent and withholding information that could keep Gyre alive.

And there are the missing supplies.

And Em won’t let Gyre turn back, even if it means her death.

THE LUMINOUS DEAD is freaky as fuck. Let’s just get that out there. It’s a rich, traditional sci fi tale, with futuristic tech and an alien world built on the income inequity of our own. It’s worldbuilding is deep (pun intentional) and it’s only two speaking characters are richly built and distinct.

The suit was her new skin, filled with sensors and support functions, dampening her heat and strengthening her already powerful muscles with an articulated exoskeleton designed to keep climbing as natural as possible. She wouldn’t even remove her helmet to eat or sleep. Her large intestine had been rerouted to collect waste for easy removal and a deeding tube had been implanted through her abdominal wall ten days ago. A port on the outside of her suit would connect to nutrition canisters. All liquid waste would be recycled by the suit. All solid waste would be compacted and cooled to ambient temperature, then either carried with her or stored in caches to be retrieved on her trip out.

Also there are bioluminescent fungi with hallucinogenic spores!

“It’s a fungus. Similar growths are all over this system, especially lower down. There are creatures that live in the water in the cavern and somethings they wash up and die,” Em replied. “Up here, sometimes insects fly in. And when the rains come, they wash in soil and everything that’s in the soil. This one’s been there for several months, though, so it’ll probably drain its host soon and die.”

The pacing and reveals are masterfully done. Readers will find themselves hooked from the very first page in the antagonism between Gyre and Em, Em’s mysterious goals, and Gyre’s fuck-all-I’m-going-to-beat-the-shit-out-of-this-cave attitude.

The descriptions are atmospheric, never too long winded, and always chilling. With very little actual antagonism, Starling builds fear and anticipation in the reader mirroring the adrenaline heights and crashes experienced by Gyre. The hallucination sequences are so artful one could easily questions their own sanity (and reading detail!).

The only weak point of the book (though minimal!) is the evolution of the relationship between Gyre and Em. The antagonism worked. The reliance definitely worked. The attraction seemed forced, at the end, and could have used another book to develop. Still, the characters both give solid reasons for staying together and after the weeks of cave diving and near death experiences, it makes sense for some bond to have formed. Readers looking for hot, steamy romance will want to look elsewhere. Readers looking for danger and enemies to lovers tropes will be right at home.

And it isn’t if there is no chemistry. Gyre notices Em right from the start, in fantastic language:

For a moment, Gyre couldn’t think. There Em was again, in full, living color, so different from the flat tones the reconstruction used to help her understand depth and material. It was surreal, mesmerizing to see another person, to see her. She searched Em’s face for any sign of incompetence, but instead, she only saw a focused, hyperaware woman. A beautiful woman, at that.

Gyre watched her for a moment, transfixed by the gentle curve of her cheek, the slight parting of her lips, before she realized her heart was fluttering in her chest. Her pulse was quickening, and she hated it. It wasn’t fair. Not only was she–stupidly–considering helping the other woman, even after everything that had passed between them, but Em was just her type. She was smart and driven and beautiful, and so unreachable that she could’ve been halfway across the galaxy.

You can get a fancy tech suit and go cave diving in paperback here and ebook here. Audio here.