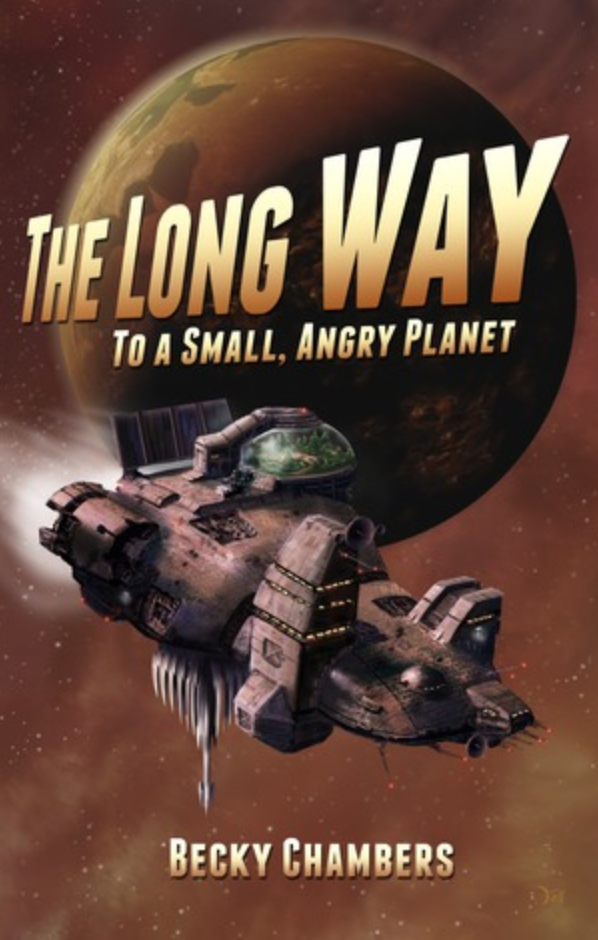 An eclectic crew aboard the galaxy’s ugliest ship (trope checkbox: ugly/dilapidated ship!) are given an extended mission to create a new ‘punch’ through space to an outlying world. Along the way we explore most every crew member in detail, people boink and find themselves, and only one person manages to die. Cultures are explored. Science is scienced. HEAs for almost everyone. Feels all around.

I have lost count of the number of people who recommended I read this book. Every Tweet request I put out for f/f space opera came back with this title, every FB post, every word-of-mouth query. So I feel pretty confident in say that people like this book. And I get it…sort of. I have mixed feelings.

To say this was a character-driven space opera would be an understatement. Characters were the plot LWtaSAP (forever after abbreviated as LW). Ninety percent of the tension in this book came from character self reflection and character interaction, not from external forces or plot driving. That was at once both refreshing and irritating, and in places this book read more like a cozy fan fiction than a novel, but on the other hand why don’t we have more books that are allowed to just exist like this? Why does space opera have to be explosions and death and war? Like, it’s opera, as in, soap opera. So really, when you think about it, LW is the quintessential soap opera in space, hence, space opera.

Not really. You sort of get the hint of one about halfway through, when the captain takes the long punch job to connect the mainly habited sections of space to a new outlier planet. The tension never really builds in this direction though, although we are treated to one pirate attack (with good tension) and one political upheaval (great tension), both of which are sadly quite short. The plot is the characters and the characters are the plot, and in this case, that means digging down into everyone’s past, exploring their secrets, and helping them find emotional resonance in whatever that means for them.

Of interest to me, of course, was the f/f pairing, which I thought was very well done. No explicit scenes at all, but enough tension that I was breathlessly flipping pages. I usually have a hard time getting into human/alien pairings, mostly because I’m (unabashedly) into breasts, but both female characters were so beautifully written and developed that the pairing seemed natural and obvious from the start. So too did the romance between Jenks and Lovey (the ship sentient AI). In no world did I ever think someone cuddling naked against a warm metal core would be erotic, but this book definitely proved me wrong (and I think we have THE SHIP WHO SANG to partially blame, for prepping me for this sexy moment decades in advance).

Holy science, batman! Solid, solid science, from the tech to the ‘how do we explain space travel so that morons understand,’ to the little everyday household items, the science in this book was beautiful and well explained. Lovers of hard scifi will be at home, as will those who couldn’t care less about the hows and whys. The writing in this book is exemplary from start to finish, and makes even the most sciencey of technobabble understandable.

This is probably just personal taste, but the book, IMO, just wandered. I don’t mind a little wander, and I love a good drawn-out courtship, but I felt like the first hundred pages of this book were functionally unnecessary and seemed to just be filler. The book lacked in sort of standard structure, or a try-fail cycle, or even a strong narrative arc (an overall arc. Characters had great arcs). It just…didn’t seem to go anywhere, and we didn’t even get a through-line until halfway through the book. The story seemed more vouyeristic, like an episode of The Truman Show, Space Cadet Edition. We’re just…watching everyone’s everyday. We get to see all the little mechanics of the ship, and personal interactions, and minor stakes. We get extended meal times and shopping times and hugging times and it just… it dragged. But it didn’t drag in bad way, if that makes sense. Like, I wanted it to have more plot but I also didn’t mind what I was reading. This isn’t a book I’ll keep on my shelf, or that I’ll read again, but I don’t regret the experience, if that makes sense.

I think this book would be of interest, primarily, for those with a love of cozy, HEA fan fiction, true space science junkies, and anyone who has ever dreamed of ‘clean’ space opera without any mass death or military structures. It’s gay as hell, too, so if you just want a good time with some queer beings in space, this is also your book. It won a crazy number of awards, so it sounds like there are plenty of readers who have long awaited a space opera like this one!

You can buy LW in print here and ebook here.

Read the review for the second book in the series, A CLOSED AND COMMON ORBIT, here.