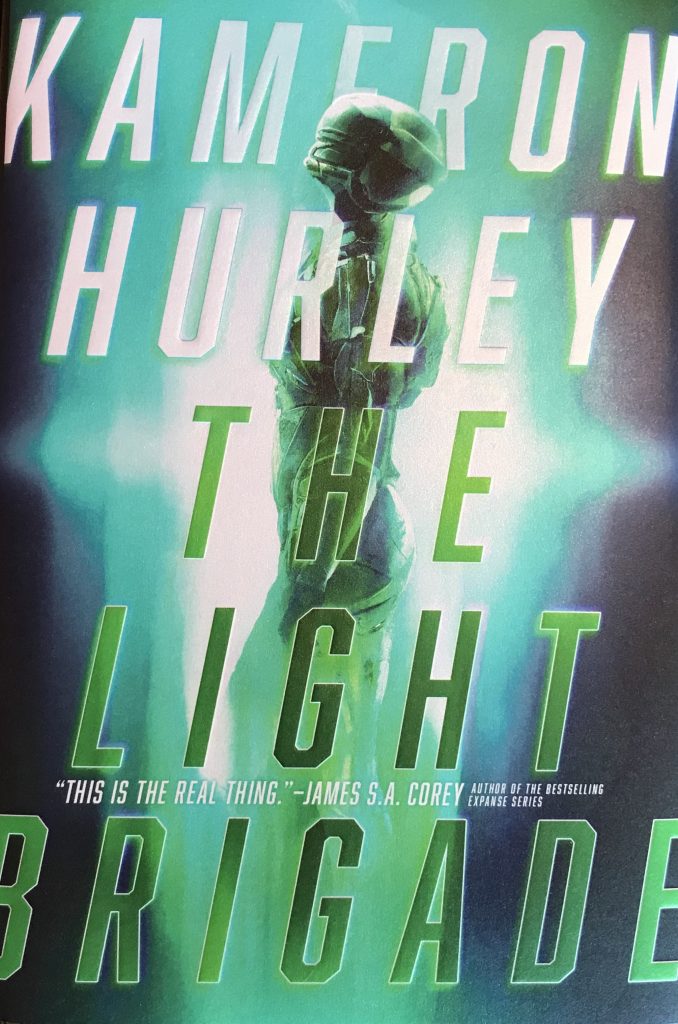 I would like to tell you I knew what I was going to do, before that. But I had not seen the true measure of the destruction that the corporations were willing to wreak to consolidate their power.

I wanted to be brave. To be a hero. To carry out orders like a paladin would. I did those things even knowing what the outcome was going to be. I wanted so badly to be the good guy.

But it truly was not until that moment, after I had destroyed everything still good in this world, that I realized I wasn’t a hero…I was just another villain for the empire.

Who needs FTL drives when you can just become light? Humans have gone and destroyed Earth (of course) and a handful of mega corporations control the remaining population. Citizenship must be earned, so the poor remain poor unless they earn citizenship, usually through military service to their corporation. Early colonization of Mars went horribly wrong, and now the Martians have returned, and are threatening the tenuous corporate control of Earth.

Dietz is a fresh new recruit in the battle against Mars. Her ‘drops’ don’t take her to new places so much as new times, and she quickly finds herself seeing the war in different locations, with different squads, and across different parts of her own (somewhat fluid) timeline. The book focuses on her emotional journey of understanding, from complete devotion to her corporation (driven by extreme poverty and no other options), to discovering the truth of Mars, to taking control of her drops and movement in time, to saving humanity.

Out of all of Hurley’s books, THE LIGHT BRIGADE is probably the easiest to follow despite the time travel. With only one POV character (and first person!) the narrative is fairly easy to follow. Dietz is a surly character, but the political climate of the book closely mirrors the current situation in the real world, making it very easy to empathize with her views.

“They aren’t our people,” Andria said, but her heart wasn’t in it. “Most are paid protestors. We’re doing a job, just like they are. They were told to disperse or face force. They know what’s coming.”

“They aren’t even armed,” Omalas said.

“Some may be,” Andria said.

In Hurley fashion, Dietz has a primary interest in women, though she does hook up with a man as well during the course of the book (also in Hurley fashion, genders outside the binary are completely absent). She mostly moves through the book alone, watching most of her friends and colleagues die gruesome deaths from drop accidents, artillery, etc.

The strength of the book is really in Dietz’s journey to understanding the ‘sides’ of the war, and who is really fighting whom.

I wanted to punch him. Scream at him. Because in that moment I had no idea who “us” was.

“Then you’re with us,” he said, and marched me to the cafeteria with the others.

And of course, there are some great one-liners:
“You know you’ll have to fight the aliens,” I said, before Frankie could get a word out, “not just fuck them.”

Muñoz perked up. “You have a girlfriend, Dietz?”

“Does she know that?” Muñoz said.

THE LIGHT BRIGADE is pretty quintessential space opera/military sci fi. Much stronger on the political messaging than other Hurley books, this one is also a lot easier to follow. Good solid sci fi, though heavy handed enough in places that it likely won’t be a reread classic.

You can try your own drop and see if you can join the Light Brigade here.