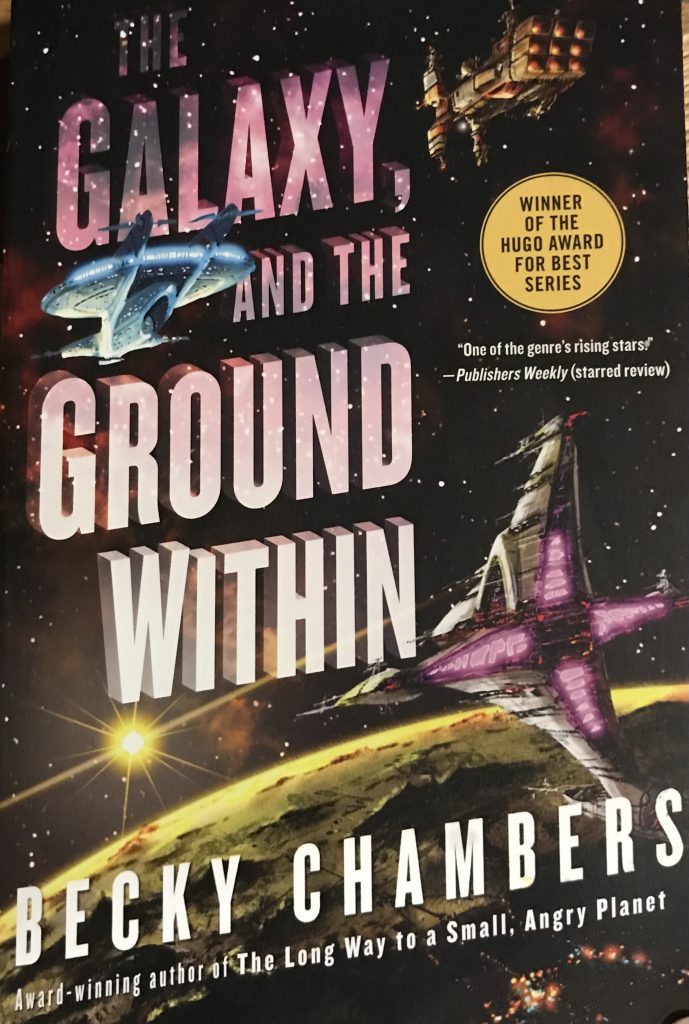 The planet Gora is a desolate world with no real atmosphere, no water, no resources. Situated between two major jump points however, it has transformed over the years into a bustling commercial hub. Numerous species have made their homes there as well, most in the tourism industry.

With that much traffic and space infrastructure comes the inevitable malfunction. Spaceships are grounded, communications are cut from planet to space, and all travelers are stuck until the powers that be can fix things.

THE GALAXY AND THE GROUND WITHIN focuses on a group of diverse travelers stuck at the Five-Hop One-Stop bed and breakfast sort of establishment for the duration of the emergency. In Chambers’ fashion, the book doesn’t have an overarching plot and instead works more as an extended coffeeshop fanfic. Readers of Chambers’ previous books will be very familiar with this style of writing. Newcomers may bounce off hard while looking for some sort of established sci fi structure.

Structure is not what this book is about.

Instead, Chambers delivers intimate looks at a number of different alien species, giving the reader deep dives into culture, anatomy, politics, and love. The story focuses on three main aliens, the alien host, and the host’s adolescent child:

Roveg (a Quelin): an exiled video game designer with a warm personality and a heart of gold who will miss his child’s coming of age ceremony if the emergency goes on too long

Speaker: a methane breather without functional legs. One half of a twin set (her sister being named ‘Tracker.’) Speaker is an Akarak and while she has nowhere to be that is time sensitive, the emergency traps her away from her sister, without communication

Pei: a military cargo runner with a secret human love interest whom she will miss seeing if the emergency goes on too long. Pei, an Aeulon, featured in the first book THE LONG WAY TO A SMALL, ANGRY PLANET.

Ouloo (a Laru): is the owner of the Five-Hop One-Stop and deeply devoted to her child, as well as her guest’s comfort and needs.

Tupo: Ouloo’s adolescent child who has not yet decided xyr gender, and who is both deeply endearing and deeply awkward, as teenagers tend to be.

Awaiting him at the airlock entrance was a Laru–a large child, too young to have chosen a gender yet, comprised of angles that didn’t look comfortable and feet that didn’t match xyr body. Xyr fur looked halfway groomed, and was too long for xyr face. It hung listlessly over xyr large black eyes in a helpless manner that suggested it didn’t know why it was still growing but didn’t know what else to do.

Roveg and Tupo do have a number of fun exchanges, especially during Roveg’s visit to Typo’s natural history museum which is definitely not a geology museum.

And that’s…pretty much it. The characters spend the book slowly getting to know one another, gaining trust, and seeing each other’s ‘humanity.’ The strongest story line by far was Pei’s, who gets a lesson in agency and learns to exercise said agency by the end of the book. I was deeply engaged with all of her chapters.

Four tendays. Pei had four tendays to get this egg fathered. After that point, the window would close the egg would break down and be reabsorbed, and…that would be that. Opportunity lost. For most would-be mothers, there was only the one chance. This was Pei’s, apparently. She closed her eyes and pushed out what felt like every breath she’d ever taken.

‘I trusted her. I liked her. I don’t always say that about doctors. But everything she proposed seemed safe and above board.’

‘Because I didn’t want to,’ Speaker said simply.

‘Because I didn’t want to. And when it comes to a person’s body, that is all the reason there ever needs to be. Doesn’t matter if it’s a decision about a new pair of legs or how you like to trim your claws or–‘ she gave Pei a piercing look ‘–what to do about an egg. I didn’t want to. You don’t want to. That’s it.’

The other chapters, honestly, I frequently had to skim. The only other stand out character was Tupo, who did not really have a POV, but whose adolescent bumbling became deeply endearing.

Ouloo swung her long neck out into the room and saw that the sleeping alcove across from hers was empty. ‘Typo?’ she called. It wasn’t like her child to be awake this early. Every morning in recent memory had begun with a prepubescent war, each more tedious than the last. Ouloo felt a faint glimmer of hope arise, a fantastical fancy in which Tupo had gotten up on xyr own, started xyr chores, perhaps even cooked.

Ouloo nearly laughed at herself. There was no chance of that.

With even less plot than the previous WAFAIR installments, GALAXY is either a very weak ending, or a very Chambers’ ending, and I can’t decide which fits better. Fanfic readers will absolutely delight in the gentle, positive, hopeful atmosphere of the book. Those looking for the quintessential space opera space battles and intergalactic politics will want to skip this one.

Be the only human at the Five-Hop One-Stop by purchasing a copy here.

P.S. This is another book with cheese jokes