This is a review for the second book in a series. To read the review for THE WRONG STARS, click here 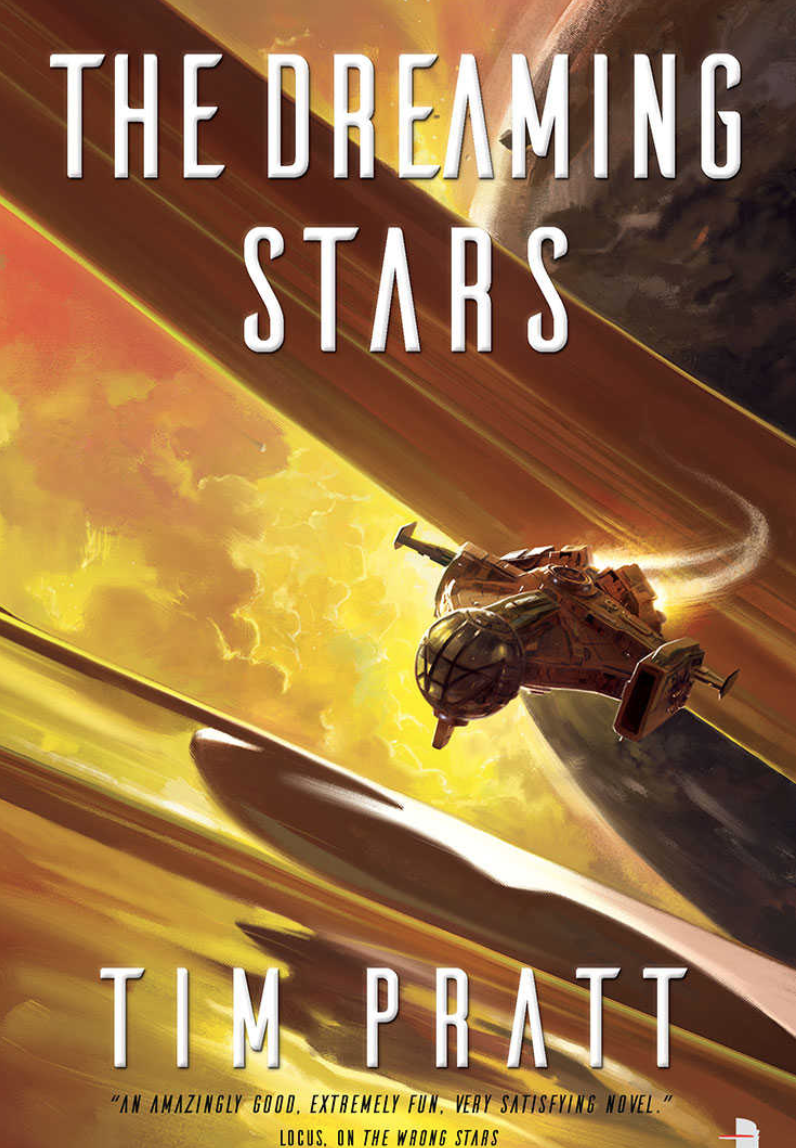 The crew of the White Raven returns! Still coming down from the high of taking out an Axiom facility, there’s some emotional cleanup to do.  Elena’s onetime friend and definite megalomaniac Sebastian has to be de-brain spidered, Callie has a funeral to attend (her own), and they all need a job. Of course said job takes them into Axiom territory where they discover the hilarious truth of the galactic overlords and what they’re doing in their stasis capsules of death and destruction.

THE DREAMING STARS is the second book in the Axiom series, and, predictably, has a slower start than the first as emotional cleanup needs to happen after the shattering revelations in THE WRONG STARS. The action doesn’t take off until the back quarter of the book when the crew finds an actually inhabited Axiom station and a swarm of murderbots that are attempting to eat the galaxy. There’s some intrigue in the ship as well, with a funny shimmer that keeps stalking Callie that no one else can see.

Although the action part of the book is at the very end, the first three quarters of the book are not wasted on filler and fluff. THE DREAMING STARS is a true middle bridge book, and spends much needed time expanding Callie’s character in particular, as well as ‘I’m-going-to-kill-you-in-seventy-ways’ Sebastian, and cyborg Ashok.

Elena doesn’t get as much screen time as I would have liked, but there are numerous scenes between her and Callie that are beyond adorable, and it is the build up of that relationship, in particular, that kept me engaged with the narrative. It’s rare in a space opera (outside of THE LONG WAY TO A SMALL, ANGRY PLANET) that we actually get to remain in romance spaces after the pair has gotten together. The pacing of THE DREAMING STARS gave the relationship between Elena and Callie time to breath and develop, and the sidebar adventure where Callie goes to her own funeral and Elena chats with Callie’s ex-husband is priceless.

As with THE WRONG STARS, there is plenty witty space opera banter that gives that television feel to the book (really, Witty Banter should be a full on space opera trope if it isn’t already). In fact, the best banter is usually between Callie and Elena, and serves to give us glimpses into their relationship. Some favorites:

(Remember: Elena is the one who was in cryosleep for 500 years)

Callie frowned. She’d heard of New York–it was a common setting in historical fiction, like Rome and Constantinople and Paris–but… “What’s New Jersey?”

“New Jersey! Just across the river from New York, but a million kilometers away culturally? Butt of endless jokes? Their state bird is an inferiority complex?”

“Huh?” Callie said. “Before my time. It’s probably part of the Eastern Innundated Area now. They do scuba tours to look at the submerged ruins.”

“Ugh. The future is the worst. Nobody gets my jokes.”

“Truly you bring us the wisdom of the ancients.”

“Ancients, huh? I am young and vigorous. You’re the one who tapped out last night.”

(and another. Remember again, Elena went into cryosleep before humanity really colonized anything outside of Earth)

“We may be eaten by space monsters.”

You can get your own access to the Axiom’s war games here in paperback and here in ebook here.