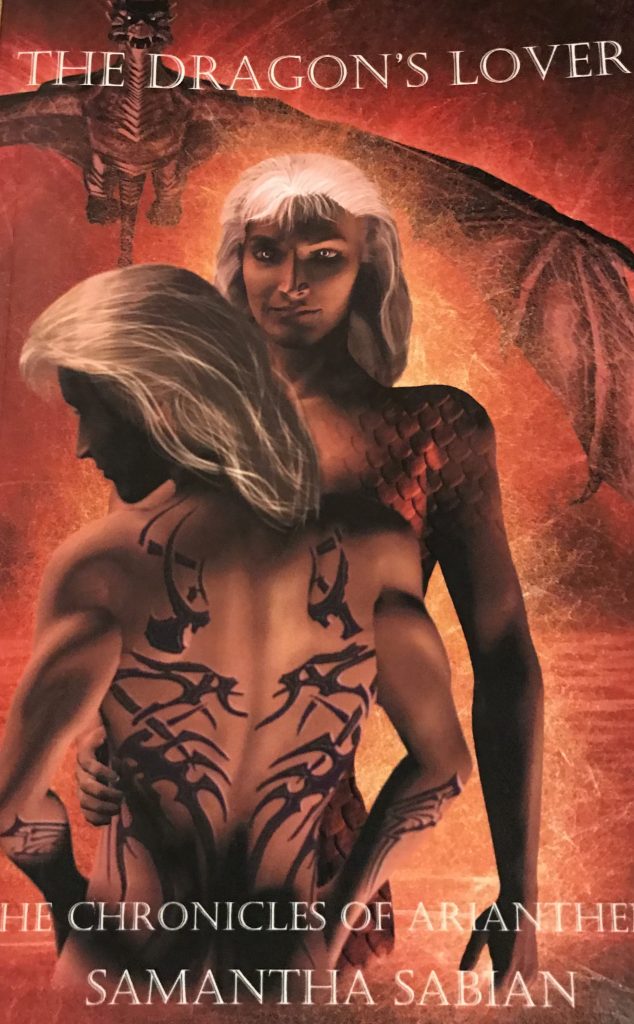 Dragons are a lusty lot known for grinding their lovers into dust.

It was exactly as trashy as I hoped it would be.

Are they two men? Are they a man and a dragon? Are they two women rendered by someone who doesn’t understand how hormones generally impact physical features? WHO KNOWS. The one facing us is definitely the shifter dragon lady, who is supposed to be A) fairly geriatric and B) buxom. The one whose back is turned is supposed to be wiry and fairly androgynous so I suppose that one isn’t too bad…except this cover steals from basically every m/m romance cover I’ve ever seen. Not a good call for marketing.

Okay no seriously it tries. Raine is half Super Hot Not-Elf, Super Hot Not-Berserker (they have their own names in this), whose people were once in league with dragons and also once sex slaves. Don’t overthink it. She spends the first third of the book wandering around trying to find something the reader doesn’t know about. By page nineteen she finds a dragon lady, who promptly takes her 200-some year old virginity with a lot of phrases like ‘unrestrained passion,’ ‘overwhelming sensation,’ and ‘she moderated the size of the appendage she’d created.’

The two boink a few more times (amusing, but not particularly hot with the strained prose) and then move to a remote mountain location to shack up permanently. Here, the plot finds them and drags Raine off on an Epic Quest which mostly confused me because really, no one reads these kind of books for the plot.

A plot summary from the back of the book (to prove to you I’m not making this up):

The Hyr’rok’kin, monstrous demonds of the underworld, are spewing forth from the Empty Land. Raine is called to join a band of humans, elves, and dwarves in a quest to stop the invasion. She fears no enemy, no injury, not even death itself. But something is waiting at the Gates of Hel, something that seeks to separate Raine from the dragon she is bound to for all of time.

Not mentioned is that one of the dragon’s human daughters goes with this merry band, and she ends up watching her mother, in human form, bang Raine. The mother knows she is there, too. It’s very weird (but not as weird as that cuttlefish m/m shifter book I DID NOT READ, NOPE, a few years ago).

There is a touch of surprising nonbinary rep:

“It is said,” the man said, his voice dropping to a conspiratorial whisper, “that Arlanians were not truly man or woman until their 18th year, existing in a neither/nor state that was irresistible.”

A) Yes, the number eighteen was in numeric digits, not spelled out

B) Yes, nonbinary people ARE irresistible, but only once they’re of an age of consent (for future reference)

You can try to seduce an old dragon lady by pretending to be a computer model from an m/m book cover by purchasing the book here.