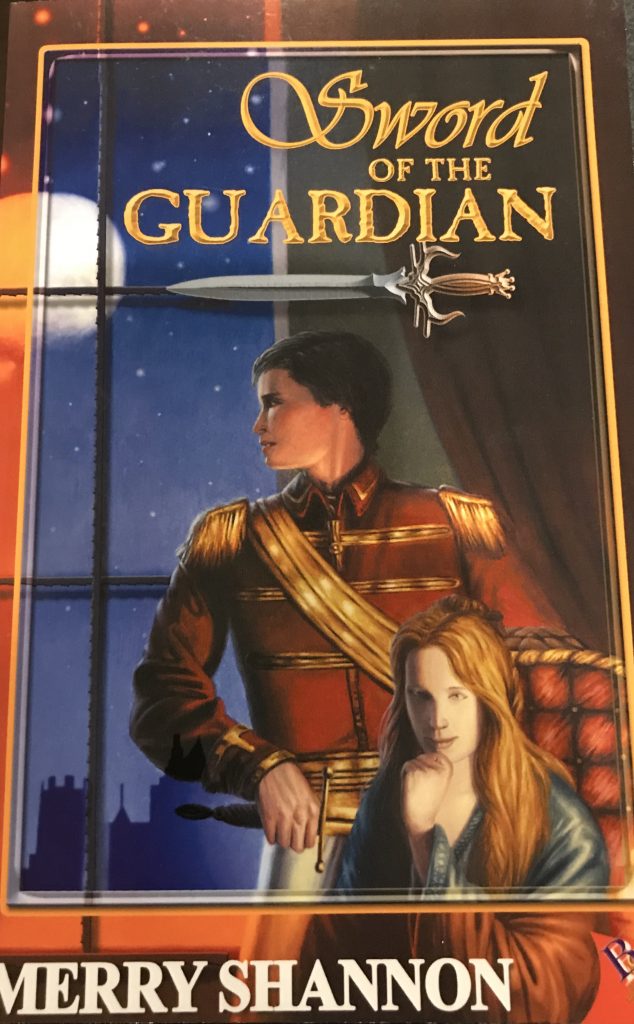 Orphaned from a young age by a band of village marauders, Talon and her sisters are sold to a traveling theater troupe. The two younger sisters are trained as singers and Talon, masquerading as a boy, becomes a skilled acrobat.

Some years later, during a performance, Talon has the opportunity to perform for the royal family. She impresses the Princess Shasta, but shortly thereafter an assassin kills the crown prince. Talon takes a dagger to protect the princess, lives, and she and her sisters are purchased by the king. Talon is to be the perfect protector for the princess, and the two younger girls are to be her ladies-in-waiting.

The plot progresses in a traditional romance fantasy trope fashion from there. Talon is brave and learns to be fundamentally invincible with a sword, the princess turns out to be more caring than at first appearance, they grow close, eventually Talon’s gender is revealed, they’re driven apart, they realize their feelings for each other, there’s a battle, and they finally get together.

It’s formulaic, but that doesn’t make it any less hot.

Published in 2006, SWORD OF THE GUARDIAN, at the time, filled an important role in the sparse lesfic world, allowing lesbians to see themselves in popular generic fantasy settings. SWORD took many of the tropes of male generic fantasy: berserker fighting, Gary Stu-like leads, fridged parents, and a hero’s journey, and blended them with the newly-established lesfic tropes that were emerging at the time, such as the butch character hiding their gender to survive in society, rape as a plot device to establish the morality of men, and the quintessential self-actualization of both main character and love interest (in terms of being lesbians).

Looking at SWORD as a product of its time, it was a groundbreaking piece of fiction. It didn’t have a hope of being picked up by Big Five Publishing (oh, how times have changed!) and it found its home in small press, where it could be the steamy, romantic, adventure tale we all want to be a part of.

Unfortunately, while small press gives a platform to underrepresented voices, it also lacks a lot of quality control, which is readily evident in SWORD. Under a strong editor, the book could have gone from simply ‘good’ to ‘amazing.’ The amount of repetition in the book, especially in the front half, made it virtually impossible not to skim.  Motivations, backstory, even entire phrases were repeated over and over, sometimes paraphrased, sometimes not. Much of the beginning backstory was told, not shown, in some incredible info dumps. The back third lagged and the last one hundred pages were superfluous, and only served to drag down a story that had a decent pace and strong tension, under the guise of a ‘lesbian’ happy ending which, of course, always involves marriage and a baby. It is a romance, after all.

Formulaic, of course, doesn’t mean a book is bad, by any means. In the romance genre in particular, readers have expectations as to how the story will progress, and SWORD does not disappoint. The romance between Talon and Shasta develops at a decent clip, with each interaction pushing their physicality that much closer to actual sex. The tension is palpable, the chemistry strong, and the characters dimensional enough that the lack of distinct voice can be overlooked. For a romance book, it’s really good. For an action book, or sword and sorcery fantasy, it’s mediocre at best. SWORD tries to juggle between the two and this is where it stumbles–when it tries to world build too deeply, offering stuttering political intrigue and extended battle scenes without sufficient tension or character buy-in. It shines best in the romance, the love triangle of chambermaid-guard-princess, and the relationship between Talon and her sisters.

Indicative of its time, SWORD also suffers from white default, and not subtly enough to be ignored, even with the steamy sex (not that it should ever BE ignored, but one slip or two you one usually eyeroll their way through). The consistent othering of Talon is exhausting, and Shannon seldom misses an opportunity to bring up Talon’s skin tone and how dark it is compared to everyone else (no one else HAS skin, as far as the narrative is concerned. No one else’s skin tone is every mentioned, therefore I deem it now canon that they are walking skeletons with muscle).

…and looked down at the handsome olive-skinned face resting peacefully…

What a strange person stared back at her, she thought: this androgynous dark face with its delicate elfin features…

…picture his smooth olive skin in the lantern light.

…and Shasta’s blue feather necklace resting against the dark throat.

…the glorious warmth of her dark skin…

…and the dark skin of an Outlander…

We get it. She’s got olive skin that is apparently very dark despite olive skin not actually being all that dark. Meaning everyone else either has no skin, or is so lily white they are nearly translucent. Also dark skinned people don’t belong in the Only Kingdom That Matters. *sigh*

Another persistent problem in lesfic writing is dealing with butch characters who wear binders. The issues with this tend to stem around two focal points: 1) there is a line, though somewhat blurry, between butch women who wear binders as a presentation effect, and non binary people and trans men who do so out of gender dysphoria. Throwaway lines like so-and-so sometimes almost forgot they were a girl–erase that line and therefore scoot towards erasing our trans siblings. One does not forget their gender–it is an intrinsic part of who we are. A butch women is a woman, no matter what she wears unless she states otherwise. She isn’t going to forget she is a woman, unless she is in fact not one at all (perhaps nonbinary or a man, and working towards that realization). And SWORD establishes very early on that Talon is not a man:

…and contrary to popular belief–and evidently her own rebellious body–she was most definitely not a man.

and yet, we get this line a handful of pages later:

‘Have I been impersonating a man so long, she wondered, that somehow I’ve become one, on the inside?’

And while the above are Talon’s own thoughts on trying to figure out her sexual attraction to women, they still edge on problematic without a narrative rebuttal. Especially as Talon’s gender reveal comes without her consent, which is a consistent and really big problem in fantasy narratives. Forcible gender reveals, whether on gender nonconforming people or not, are an act of violence. And while no one rips or tears Talon’s binder (thank goodness!) she is still forced to reveal her gender after being wounded (trope! take a drink!):

“I’m tired of this, Talon, I’m sick of all your silly games and secrets. If you can’t give me one good reason–“

The second, more pressing issue for SWORD is the effect of a binder. Anyone who has worn a binder can tell you two things: 1) they aren’t comfortable for long term wearing (think of how much you love taking off a bra at the end of the day, now compound that times 1000) and 2) they’re dangerous. The long-term repercussions of binder wearing, especially 24 hours a day, is well documented in medical literature. They also restrict your breathing, as well as permanently deforming your ribs and moving your internal organs, much like a poorly-fitted corset.

Leaping into the center of the room, she launched right into her routine, executing two cartwheels and a front flip, bending backward, and then kicking into a handstand. With exquisite precision, she lifted one hand off the ground and held the position while one of the smaller troupe members placed delicate cups of steaming tea on the tups of her toes and in her open hand.

Hence, the idea that Talon has been wearing a binder since puberty, while working as an acrobat and then training as a swordsman, and has absolutely no issues becoming absolutely fucking fantastic at everything she does, stretches the suspension of disbelief. That she makes it into her twenties and has no long term health effects from said binder, is also highly unrealistic. SWORD is a fantasy, yes, but with a focus on lesbians and lesbian lives. As such, these particular areas deserve a bit more scrutiny than the rest.

Despite all of that, SWORD OF THE GUARDIAN was a fun read, with some very tight romantic tension and nice sex scene near the end (“Well then, Corporal, I hope I remember to whisper when I’m calling out your name.”). For those tight on time, feel free to skip the last 50-100 pages, but definitely don’t skip the beginning, as the sexual tension is set up well and is a delight to follow.

You can get yourself a binder that somehow doesn’t crush your ribs, grab a sword, and seduce a princess in paperback here and ebook here.

P.S. And yes, I did note the anatomically incorrect fungi. Spores can’t and don’t burrow, just for clarification, even in fantasyland.