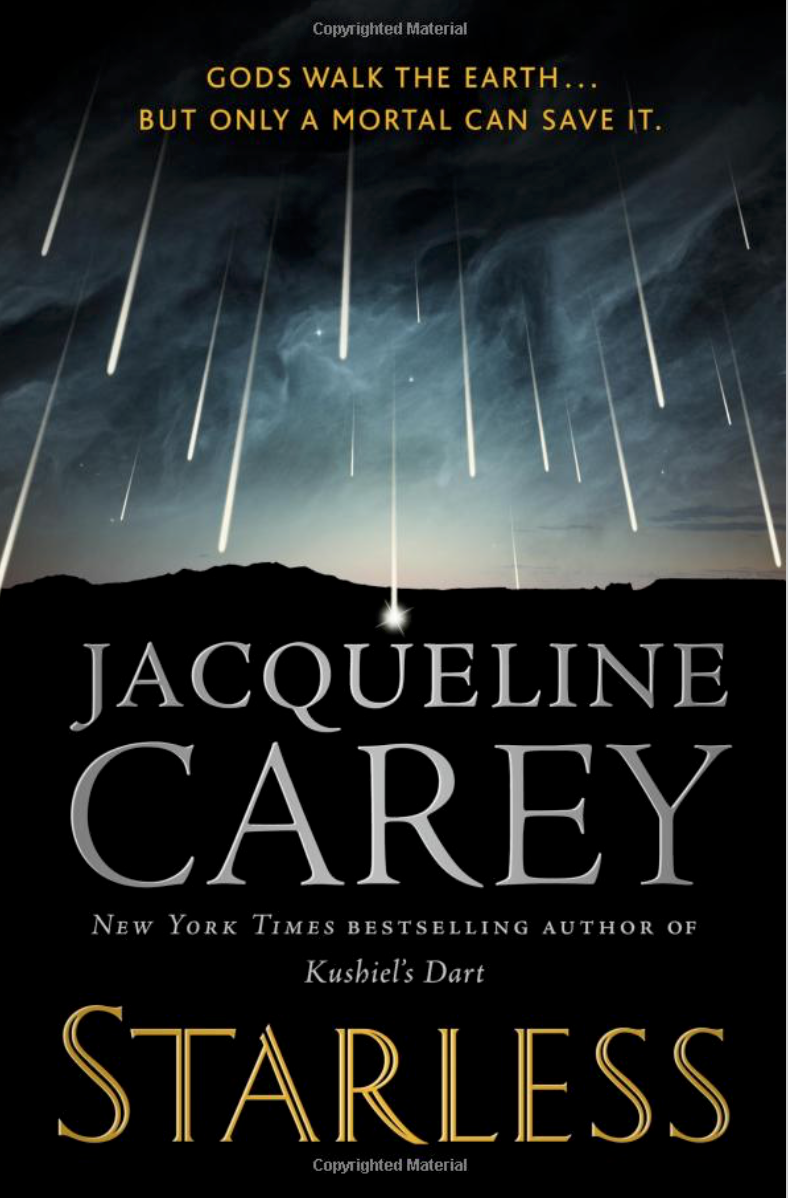 Long ago, the gods fell to the earth, including one who did not deserve its fate. A princess and her sworn protector join a motley crew of mortals tasked with saving their world from the destruction of a vengeful god in this delightful high fantasy adventure with a nonbinary protagonist.

Read my more ‘professional’ New York Journal of Books review here. For a review with more raw emotion, continue below.

I requested this book through NYJB after seeing someone on Twitter ask if any enbies had reviewed STARLESS. Curious, I looked it up only to find it was written by one of my favorite authors, Jacqueline Carey. I never cared for her KUSHIEL series (pease do not send me hate mail) but absolutely adored SANTA OLIVA and SAINTS ASTRAY. Mercifully it was close enough to STARLESS’ release date that I could snag a review copy. Unsure what to expect–the inside jacket blurb isn’t great and the tag line is unhelpful–I dove in.

At its most basic

This is high fantasy. There are living gods that walk the earth, magic, dragons, pirates, princesses, seers, fairy-type people, etc. Mercifully it is less a midivil European fantasy and more a ‘travel the whole planet’ fantasy, wherein the reader gets exposed to numerous species and cultures. It also lacks any on-screen rape (although rape is mentioned obliquely in-world) and there are no white people saving scores of brown people. It’s not a George R.R. Martin book. There’s also plenty of women in it, which means it’s not a Tolkien book, and it does more than lip service to diversity, which is a heck of a lot more than most stuff on the market today.

The above alone would make the book worth reading, but Carey takes the book a step further with the exploration of nonbinary identities. As with my professional review, I’m going to avoid talking much about the greater plot (it’s great, btw, but I figure since someone was looking for an enby review, I’d better review the enby bits). I will say that the living gods are creepy-cool, and one of my favorite parts of the worldbuilding.

Khai and the gender question

Khai is born during a moon-on-moon eclipse, at the same time as a princess of the Sun-Blessed. Chosen by a god to be the princess’ protector (known as ‘shadow’) Khai is raised by an all male brotherhood and trained as a warrior. Shadows, however, are always  male, but Khai is not. In a male-dominant society where women are veiled and kept apart, Khai is raised bhazim, an ‘honorary boy.’

In order to better keep the secret of Khai’s gender, the brotherhood insist upon complete privacy. Khai never learns that he (Khai uses ‘he/him/his’ throughout the book) has different anatomy (he doesn’t even seen a woman/girl until 11).

It is not clear from the writing whether Khai actually is a boy, and thus never experiences dysphoria from the way he is raised, or does not experience dysphoria because there is no other gender option available. The experience of dysphoria, while certainly not universal to the trans, trans nonbinary, and nonbinary experience, does play a role in this book, and marks various points in Khai’s journey of gender discovery.

A quote that set the stage of my expectations, and then delightfully did not materialize, showcases the mastery with which Carey discusses the way Khai is raised:

In many ways the plot reminded me of one of my favorite series. THE BONE DOLL’S TWIN (forever after TBDT), which is a great dark fantasy but, in my opinion, really botched the ‘girl raised literally as a boy and finds out she is a girl’ trope. STARLESS is what I wanted BONE DOLL’S TWIN to be in terms of gender exploration.

In TBDT, the MC has some light struggles with being a girl raised as a literal boy (through magical body transformation), but generally gets on fine. When her body is finally remade into its proper form, the princess has little difficulty with the transition. It’s not that the transition was untrue in any way, I guess I just always thought it lacked real emotion. STARLESS does a great job at capturing that moment of shock and the resulting actions.

It’s beyond important to have every kind of representation, and I certainly don’t have any issues with the volume of gender fluid characters on the market. I do wonder though if gender fluid characters are picked up more readily by agents and publishers because the genders are relatable. Instead of constantly in between, the character may only be sometimes between, and more often traditionally on one end or the other of the binary. Writing a third gender (or agender, for that matter) character is hard, and it may be that connecting with one, for a standard cis audience, is even harder.

Khai does consider various other nonbinary designations, and it takes him the better part of the book to settle on what could best be described as third gender. Here’s a snippet of text from page 215 (hardback edition), where Khai is discussing his gender with Princess Zariya, his soul-twin and love interest.

“How do you think of yourself now?” she asked curiously. “As a boy or a girl?”

I thought about it. “Neither, I suppose. I don’t know how to be a girl but I don’t want to, either.”

Zariya goes on to tell Khai that the Elehuddin people have words for certain types of nonbinary, such as ‘neither man nor woman’ and ‘possibly both’ (note that this species can physically change their gender). This is later confirmed (page 406, hardback) where an Elehuddin tells Khai

“The first is for a person who is in the middle of changing between one and the other. The second…” Breaking off our discourse, he conferred with the Elehuddin in their own tongue. “A person who is alone, maybe a person who has lost their tribal for some reason, may choose to be both. This person may become father and mother like to their own child.”

What I find most interesting about this beat, however, is that Khai rejects the female gender here seemingly solely on the poor social status of women, which Zariya does call him out on. This sets Khai on the road to considering aspects of being a girl, and I think eventually helps him settle on an identity.

I relate to Khai’s journey on numerous levels. Khai’s reaction to being told he is not the gender he was raised as, and his resulting emotions, struck a nerve. Having also been raised in a way that fit my gender identity, to find out that your body tells a different story (even if that story affirms certain peculiarities), is difficult to deal with.

It was great to see a character really grappling with the balance of male/female, and dysphoria over clothing. The most ‘real’ part of the book, for me, was Khai donning a dress to please his mother (who always wanted a girl), and both hating it and also appreciating the way he looked. STARLESS does not lack for complex emotions.

Even Khai’s journey into the city proper, when he must first start interacting with women, felt very much like my own forays into women’s circles (especially during pregnancy).

You and me both, Khai.

Even the parts I couldn’t relate to as well made perfect sense for the character. In the beat below, Khai is having a bath with women for the first time.

And yet… to be wholly naked, a woman among women? The thought of it was profoundly uncomfortable.

The only part of the Khai-gender-journey that didn’t seem to fit quite right was the mother-dress beat. In it, Khai learns that his mother has always wanted a girl, and promises to dress as one the following day. He does so, much to his own discomfort, but later enjoys how he looks in the dress and greatly enjoys his mother’s reaction. Khai thinks back on this moment many times throughout the book, such as in this section on page 498 (hardcover)

She stroked the soft silk. “Thank you, Khai. But I suppose such garb was little to your liking.”

I didn’t answer right away. remembering the first time I had seen myself in the mirror attired as a woman; remembering the light in my mother’s eyes when she had seen me thusly as the daughter for whom she had yearned. I didn’t think these were things Even could fully understand, even if I were able to articulate my own conflicted feelings. “That is not entirely true.”

Everyone, of course, experiences dysphoria differently (if at all), but I was left to wonder at this point how Khai even managed to put the dress on, with all the problems he had had to this point with general anxiety and dysphoria. It’s all well and good to reevaluate once it’s on, but I was surprised to not see more emotional reactions from Khai during the dressing. I’ve scratched my skin so hard it bled from trying to tear my way out of a sweater that made me feel too feminine. I can only imagine being stuffed into a dress.

Minor quibbles aside, this was an excellent book. While both my reviews have focused on the gender aspect, there is so much more to this book, including grand adventure, magic, and yes, love. Fans of THE BONE DOLL’S TWIN, MASK OF SHADOWS, and ARDULUM (there’s a similar journey of self discovery in ARDULUM) will enjoy STARLESS. Out of all the books I’ve read this year, this is definitely my favorite.

You can buy STARLESS in paperback here, digital here, and audiobook here.