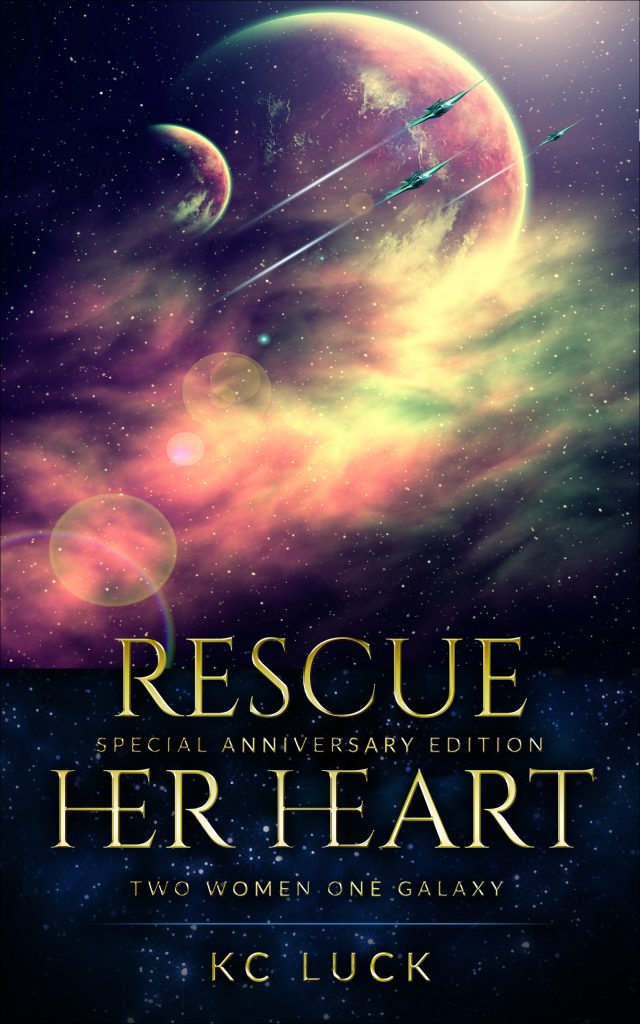 Captain Nat Reynolds is a workaholic space ranger. Catherine Porter is an eighteen year old down-on-her-luck waif with a dilapidated ship and not a penny to her name. Asteroids happen and Catherine gets stuck on the ice planet Hoth (not really its name but same idea) and needs some serious saving. Catherine thinks she’s straight. Nat definitely isn’t. They end up in a hotel room together. You can guess how it goes from there.

RESCUE HER HEART is romance with a light sci fi flavor, but definitely can be classified as ‘lesbians in space’ due to several space scenes. The plot follows well-established romance lines and employs a number of lesbian tropes such as soapy sex scene, age gap, and coming of age sexual awakening.

The book begins by establishing Nat as a battle-worn space ranger whose only love is her job. She’s never taken a vacation, which is critical information for her spending spree a bit later in the book.

An asteroid field strands Catherine on an ice planet and space ranger Nat comes to her rescue–a rescue that of course involves getting naked for warmth.

Nat learns Catherine has no money due to her father disappearing (and being quite the drunk) and so offers to fly Catherine to a nice planet where she can get some clothes with Nat’s money. They end up in a hotel room (cue important ‘where will we sleep’ tension) and go clothes shopping (cue ‘do you want to see the cute panties you bought me?’). Catherine thinks she’s straight and so flirts like only an eighteen year old can with a safe target. Nat’s big on consent and so things get really damn hot. Catherine eventually realizes she wants to bang and things proceed.

The second half of the book has more of the sci fi plot. Deciding to go on a pleasure cruise in a fancy rented spaceship, Catherine and Nat become prisoners of space pirates when their ship gets jacked. Then there’s lesbian space pirate drama (the best kind) and some decent action scenes.

Erasing homophobia in future settings is a growing trend in queer fiction, especially spec fic. Parts of RESCUE read more like a 1980s bar encounter in terms of homophobia and sexual advances but it’s definitely important for authors to be able to see their worlds in the books they write. Many lesfic writers in particular came of age in the 1980s and 1990s, when homophobia and sexual harassment were still very commonplace. Being in this age group I can deeply relate to the events in the book, although they may ring abstract and unnecessary for younger readers.

The biggest stumbling block in the story is the tech. The book is one hundred years in the future but one law enforcement person still uses a paper printer (it’s noted as an antique). Heaters still have dials. The ‘old’ spaceship has a windshield (that gets cracked from a meteor but no one gets sucked into space) and a steering wheel that Catherine actually has to fight to keep the ship on course through the asteroid field.

You don’t really read books like this for the science, however, and the problems are easy to overlook in the very well done sexual tension. The scenes and placements are sometimes silly and over the top but keep you well in the narrative and rooting for the main characters to just boink already. Example:

…Nat realized the woman was braless. Nat forced her eyes away, and with shaking hands, pulled off the girl’s boots and socks before focusing on removing her pants. It was difficult to cut through the thick fabric and knowing precious time was slipping away, Nat tossed the scissors aside and gripping the cloth, yanked with all her strength to tear the pants apart and off the girl’s body.

I mean, we laugh but really, we’ve all had this fantasy.

You can join the space pirates in ebook here, or the space rangers in paperback here. Either way, you get to bang in the shower.