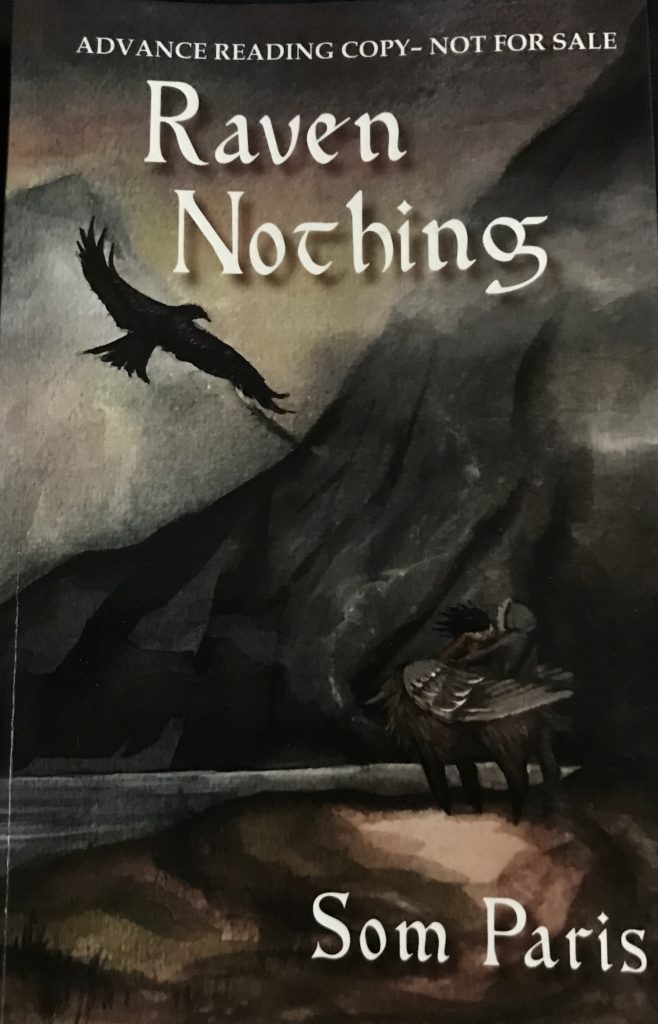 Blurb from the back of the book:

Raven, a trans girl from south England, wakes on a piece of ice floating on a frozen ocean. Adap, who has lived his whole life in a dying village just off the coast, finds her and brings her home. When she is told she must travel to the Golie Mountains, at the center of the world, Adap volunteers to take her. Together they navigate around a resurgent soviet-esque state that is at war with an ancient culture of gender-wild shamans. As they travel, she realizes that there is no one in this magical world who is not black, like her, and that every place they go seems uncannily familiar.

At its heart, RAVEN NOTHING is a story about finding acceptance from family during a young girl’s trans journey. It’s steeped in secondary world fantasy, with a heavy dose of ‘ancient culture mysticism’.

There is nothing really unique about the story. Raven is unaccepted and taunted at home, and longs for her father’s love. She suddenly finds herself in a foreign, frozen sea (assumed portal, though none is mentioned), and her journey through the frozen land takes you through her memories as well, and various allegories for common trans experiences. There is a great deal of ‘trans pain,’ which was no doubt cathartic for the author to discuss but may be grating/tiresome for some trans readers seeking relief from the everyday trials of the cis world.

Raven is likable enough, though it is Adap’s character that really shines through as a unique voice. The end is appropriately happy, with a reconciliation with the father and Raven coming to terms with the function of her portal/dreamscape.

There was nothing functionally wrong with the book, but I have to admit that I found it tiresome. The prose was heavy, the allegory thick, and at this current place in 2020 I just really am not in the mood for childhood taunting and forced undressing.

When Raven didn’t budge, the woman raised her crow’s beak hand and began tugging at Raven’s sodden jacket. Raven recoiled. The woman’s gnarled fingers caught hold of Raven’s school skirt and, as she backed away, it slid half-way down, and Raven was left exposed in the middle of the frosty room. The woman’s hands rose to her own mouth, and she fled.

I hate it when gender/sex/anatomy (depending on story and character) is forcibly exposed in cis male written works–so much so that I usually toss the book across the room and stop reading. I was surprised to find it in what I (assume) to be a trans author’s work. But we are allowed to discuss our pain however so choose, and perhaps this event mirrors an event in the author’s own life. I don’t know. I suspect the book was written more with a cis audience in mind (via education), or for a much older trans audience that could relate to the acts of violence done to Raven and see them as either a rite of passage, or a ‘this is an element needed in trans fiction’. For me, I found them grating. I wanted fantasy, and I wanted Raven to triumph, and I wanted her to do it as herself, not despite being a trans girl.

To the book’s credit, the romance is sweet and age appropriate, and definitely was the reason I kept reading.

He looked her straight in the eye and solemnly said, “I’d want to go anywhere you wanted me to.” And then they both suddenly felt unbearably awkward and looked away, to the snow thickening over the hills, to the roofs bleating amongst the tall green grass, and neither of them spoke for a while after that, but Raven felt as radiant inside as the setting sun that bathed the snow and grass in blankets of gold.

There are some nice neopronouns use (fe/fer) and the world being entirely Black was a nice change, though very little is discussed in regards to either.

He was not a tyrant wanting to lock her away from herself, not an all-powerful lord of the house whose word endangered her ability to become a beautiful person of her own. NO, he was just a frightened little man who had followed her up this tower because she was his daughter and he would have followed her anywhere at that point. Because he loved her.

The ending is sweet and very much the ending each and every trans person deserves. I just didn’t like the journey, not because I couldn’t empathize with it, but because it hits too close to home. Escapism, for me, this book was not.

RAVEN NOTHING is published by Aqueduct Press and will be out in late 2020. This post will be updated with buy links when they are available.