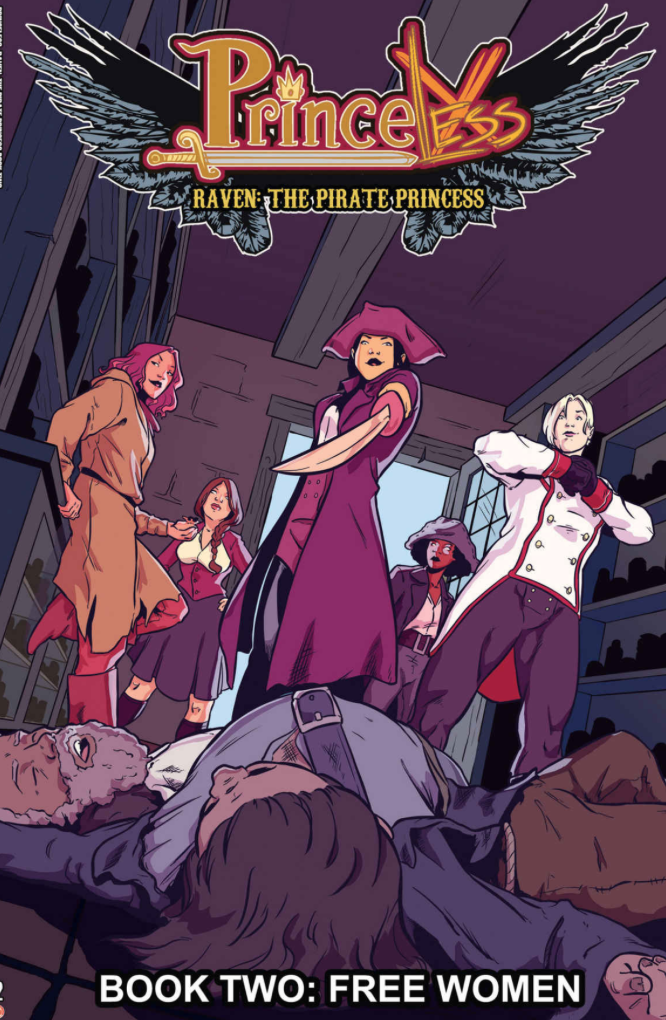 Book two picks up right where we left off, with the all female crew of Raven’s pirate ship off on their first adventure! In this collection the crew sails to The Island of the Free Women–an island Raven’s grandmother set up decades ago to beat back the patriarchy. Unfortunately now it’s just a wretched hive of scum and villainy, as these things go.

The crew are still getting to know one another, and as they split into teams to get the supplies they need to beat Raven’s brothers, the brothers strike first and Raven must go head to head with her family.

While the series still has my attention, I felt like this volume wasn’t as well done as the last. There are too many characters and we’ve not spent enough time with most of them for me to remember their names, much less their backstory. It makes their peril less interesting to read about, and the action scenes harder to parse.

The font also seems to be smaller in this edition (or my eyes got worse in the… two months? between reading volume one and volume two), or there was just too much going on in the panels to focus on the words. Whatever it was, reading this volume gave me a headache and I actually put it down for a few days. Volume one I read to cover to cover in one sitting, so enthralled was I by Raven and her crew.

This volume might have had more punch if it had a contained arc to it, which volume one certainly did. In this one we spend a lot of time on character building (and yet somehow still not enough, since there are so damn many characters) and only get action with the brothers at the very end. As that action ends mostly unresolved, I was left with a ‘that’s it?’ taste in my mouth at the end of the volume. I don’t mind being along for the extended ride, but I need touchstones and progress markers, or I’m going to wander.

Regardless, it’s still a lot of good solid lesbian pirate fun. If you’re like to get back with Raven’s very diverse pirate crew, pick up the next volume here.

Hey readers! Did you know you can subscribe to this blog? Don’t miss out on Review Sunday and Ardulum Wednesday ever again! Look on the right sidebar for the grey box that says ‘Get my blog posts via email,’ enter your email, and hit subscribe. It’s that easy! (if you can’t see it, just scroll down a bit.)