Warnings: So. Much. Rape. 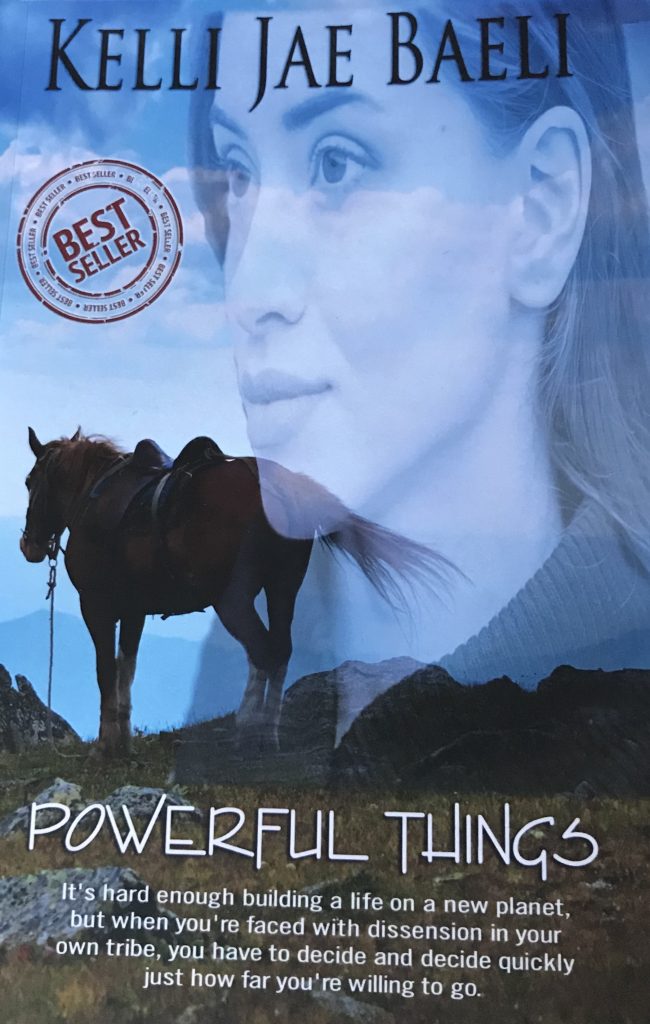 Two generations ago aliens known as the Bandonese landed in a remote section of Colorado. The surviving crew being entirely female, the Bandonese went into nearby towns and got themselves pregnant. The resulting generation is now half human / half Banonese (I have so many questions) and trying to continue their way of life in isolation in Colorado.

Their leader, Mozzik, has secrets and is power hungry. he grows increasingly off balance as the book progresses (for no discernible reason) and a confrontation is eventually necessary. This drives our heroine, the half-human Sivon, to a nearby farm where she meets and falls for Zoey. Zoey’s father is on Mozzik’s hit-list, of course, because Plot, and Sivon must confront Mozzik if she is to keep her newfound relationship in one piece.

This incredibly low-stakes, light sci fi work appears to be a romance novella with sci fi seasoning thrown in for giggles. Sivon is barely three dimensional and follows the tired tropes of ‘woman who wants to love women under a patriarchal asshole,’ made more irritating by the gratuitous rape that appears to be a way of life for the aliens. It’s made worse by no direct authorial discussion of the rape issues, making it seem like the narrative supports it.

On how the first generation alien women got pregnant:

Crew members used their formidable mental skills to incapacitate the male humans who lived at the sprawling farm–the workmen, the servants, and male members of the large family that occupied the main house. They used the males for seed, and soon, the first generation of hybrids was born.

Had I not been hoping for some development a bit later on, I’d have stopped reading right there. I have no interest in reading about a rape-culture species.

And then, of course, yet more rape:

Corchi crawled onto the bed and began to work on Brix’s flaccid member, as Mozzik took a position on his knees behind Corchi, and lubed his own. The leader’s needs had to be met, Mozzik had always told him. And it was too dangerous to meet those needs with outsiders. He just had to do what he was told. It would be over soon, Corchi knew.

Lest you think it’s just the men getting raped, well,

He stood up abruptly, grabbed Sona and pushed her over onto her stomach, pulling her hips up and to the edge of the bed, so that her behind was up in the air. Then he unfastening [sic] his pants. “I’m not here to serve you. You’re here to serve me.” And he thrust inside her.

These two were forgetting their place, Mozzik thought. Just to make his point more distant, he grabbed Luna by her hair and directed her on her knees behind him. “You put your mouth on me, Luna. Now.”

She did as she was told.

Equal opportunity rape, I guess. All gratuitous, and none that furthers the (flimsy) plot.

The author also appears to either be unfamiliar with some forms of intersex anatomy, or was trying (poorly) for inclusion. The hybrids are described as having some bigger organs, including clitoris:

Sivon moaned involuntarily, as Zoey found the bud the size and shape of a lid from a bottle of eye drops.

First, that is probably the least sexy way to describe a clit during a sex scene. Second, micro penis is real and should not be in sci fi as some alien thing, or fetish thing, or whatever is going on here. Third, what a waste of an opportunity! Sivon has a micro penis but all Zoey does is treat it like a standard tiny clit. There was SO MUCH SPACE HERE for a unique sex scene. But it, like much of the book, seemed to be an afterthought.

I will say that if you’re looking for camp, this book has it. Viewed as a sort of a pulpy-camp novella, it could have its charm (without the rape, anyway). For instance, nothing says camp like sex-healing water energy from fated lesbian lovers:

“Our water…” Zoey considered the implication. “The water with our sexual energy in it.”

Sivon was breathing hard, this time not from sexual arousal. She dipped her hand in the water and poured a bit of water from her cupped palm atop another bit of brown foliage nearby. As the watched, it, too, came to life.

“Sivon…do you know what this means?”

“And that’s also why we are so drawn to each other. Like we being together because we are the same in a fundamental way. Like missing pieces to a puzzle, that completed a picture when they are linked in the right way.”

(Those tense changes happen a lot throughout the book, FYI)