Warnings: this book is freaking adorable 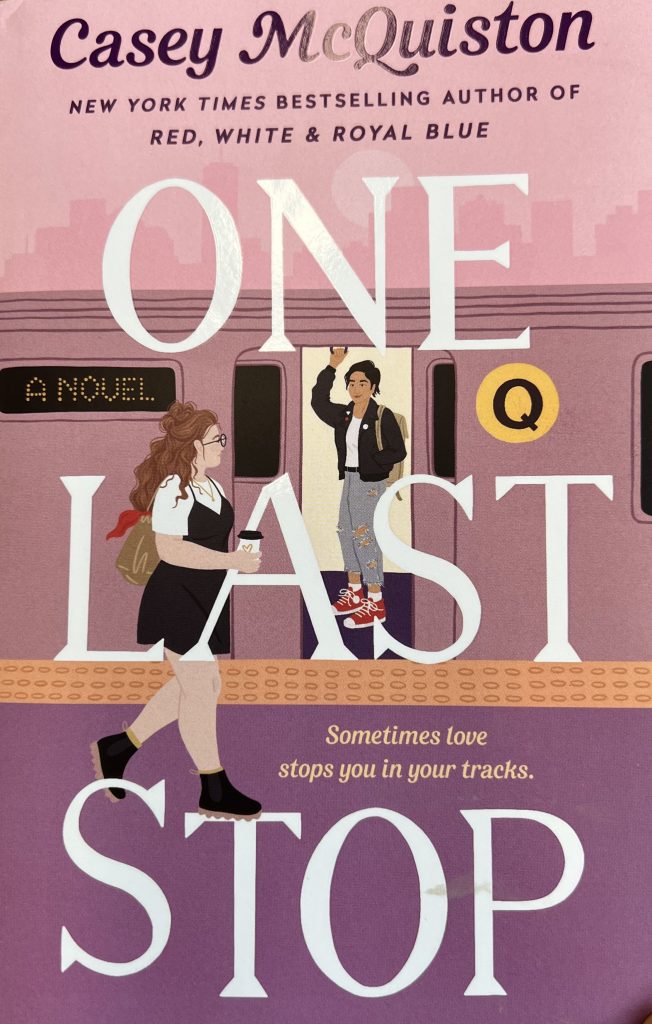 Twenty-three-year-old August has just moved to New York City, intent on finally finishing her degree and carving out a life away from her obsessive mother. Frequent rides on the subway keep her running into a mysterious woman in late seventies fashion. Jane is the butch of August’s dreams, but has a little bit too much of the unknown about her. The more August unravels about Jane, the more she comes to doubt not only her understanding of physics, but her understanding of her own family. Jane may be the key to finding August’s long-missing uncle, but she may be the key to August’s heart, too.

I’m not usually a contemporary reader. I did like the author’s last work, the m/m RED, WHITE, AND ROYAL BLUE, and so an f/f pairing, with time travel, sparked my interest. Overall, ONE LAST STOP is a cute, if overlong, ‘meet cute’ book. The sci fi elements are deeply downplayed in favor of extensive character work. Found family abounds, deep introspection is the norm, and there’s a lot of NYC atmospheric elements that help bind the book together.

The romance between August and Jane is the strongest part of the narrative, and all the make out and sex scenes are tight with tension, longing, and butch/femme dynamics. They are unfortunately couched between what sometimes feels like endless friendship discussions with August’s roommates–all of whom are entertaining, but all over the top in one way or another. One or two would make the narrative richer. Five or six make the narrative overwhelming.

ONE LAST STOP would make for a great airplane travel book or comfort read on a long, rainy day where you still have some things to do. Imminently interruptible, it’s a soft, cozy love story about subway romance with easily skimmable fluff filler.

With that said, the narrative voice is strong and August’s voice in particular is distinct. Some examples include:

“Yikes,” she says, gesturing at August’s shirt, where the coffee stain has soaked in and spread, which is the last possible reason August wants this girl to be looking at her boobs.

August can feel her face glowing red to match the scarf, like a giant, stammering, bisexual chameleon. An evolutionary mistake.

And the writing is rich with lesbian courting dynamics I seldom see written down, even in contemporary romance:

She lowers her eyes finally, and when she cuts them over, August forgets she ever asked a question. Or what questions are. Or the entire process of speech. “What brought you here?”

“Um, school,” August says. The lighting is already unflattering, so it can’t be helping the shade of red she turns when confronted with significant eye contact from butch girls in leather jackets.

There are also a few delicious pop culture references. My favorite:

“August, I love you very much, and I want you to be happy, and I’m very confident that you and this girl are, like, fated by the universe to finger blast each other until you both die,” she says. “But honestly? I am in this for the sci-fi of it all. I’m living a real life episode of The X-Files, okay? This is the most interesting thing that’s ever happened to me, and my life has not been boring. So, can we go, Scully?”

Grab yourself a subway card and see if you can find your own time traveling butch girlfriend by buying the book here.