Note: this is the second book in the series. A review of the first book, BARBARY STATION, can be found here. 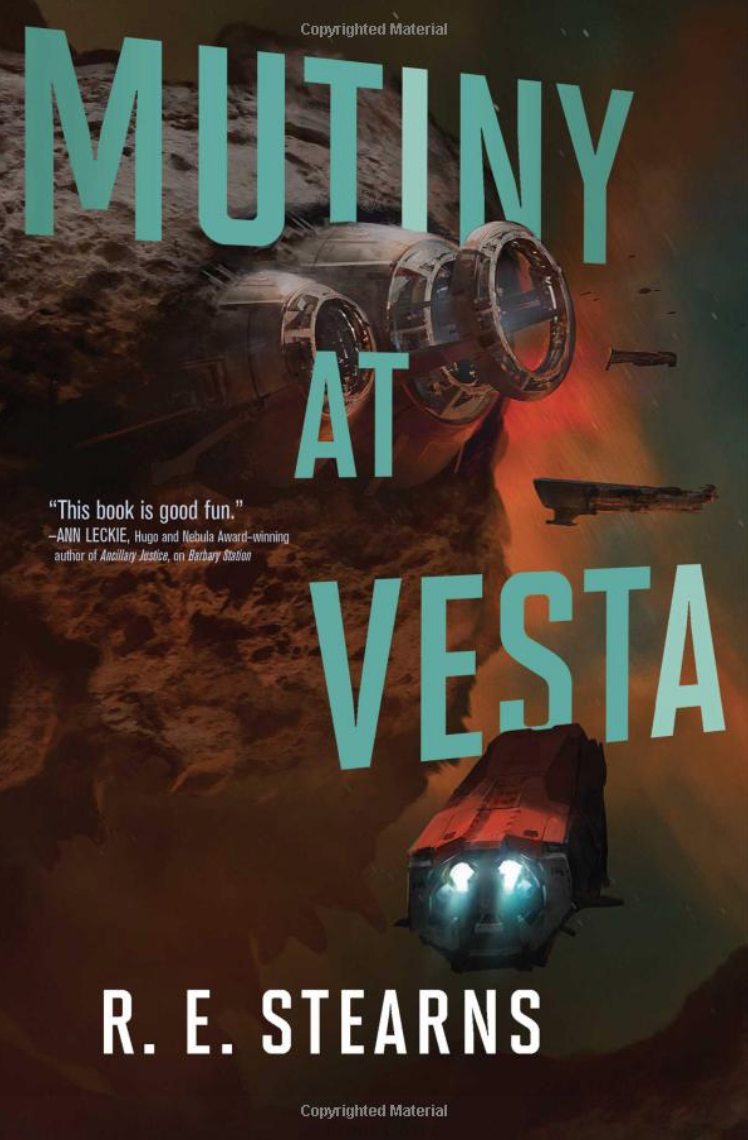 Buckle up kids, it’s time to kick off the YEAR OF SEQUELS!

It is hard as hell to get your sequel books reviewed, especially the farther you get into a series. Most small review sites and blogs flat out won’t even consider them. Hence, this year I’m dedicating to sequels and series, as well as trying to finish up my list from last year that I didn’t quite make it through.

Top of my list for sequels for 2019 was MUTINY AT VESTA, the sequel to BARBARY STATION. BARBARY introduced us to long-term couple Adda and Iridian, who have turned to piracy as a way to pay off their sizable student loan debt. Excellent hook. Everything goes awry when they get trapped on Barbary Station with a rouge AI bent on killing them, the pirates, and a mess of civilians.

Eventually of course they manage to deactivate the AI and escape Barbary. MUTINY AT VESTA picks up not long after. Adda and Iridian are now fully members of Captain Sloane’s pirate crew. Unfortunately they don’t get to do a lot of fun lesbian pirating, as they are almost immediately blackmailed into working for a mega corporation with no soul… as these things go.

The rest of the book contains a series of short adventures as the crew do the bidding of the corporation while also trying to get out from under its thumb. Adda and Iridian are just as adorable as ever, Pel is back with his flamboyant, youthful earnestness, and there are a ton of explosions. Added to it are four sentient AIs that may or not be evil. No spoilers.

Like BARBARY, MUTINY had a lot of nitty gritty detail. Lovers of every movement and minute action described will find the blocking perfect. It’s easy enough to skip over if that sort of stuff bores you, too. The book truly is a blend of space opera and military sci fi, and consistently wriggles between the crew interactions and feeeeeelings, to command structures, heavily explained tech, and A.I. workspaces.

The A.I.s though, that’s the real reason to read MUTINY. AegiSKADA, the rouge A.I. that tried to murder everyone in BARBARY, is back (although rebooted), along with all the other awakened A.I.s from the end of book one. Adda ends up trying to train all of them, which inevitably puts a strain on her relationship with Iridian and the rest of the crew. The detailing of her artificial dreamscape/workspace remains incredible, and the A.I.s are as fully fleshed out as any character.

As Sloane’s crew become more and more tangled with mega corporations and further from their dreams, it’s impossible to not root for the A.I.s turning into contributing members of the pirate crew. At times they even seem the most straightforward of the characters, which of course, is all part of R.E. Stearns’ plan.

While it might not always be the most straightforward romp, MUTINY AT VESTA is a worthy sequel to BARBARY STATION. From the ending it looks like there might be a third in the series, so here’s hoping.

You can buy MUTINY AT VESTA in ebook here, print here, and audiobook here.