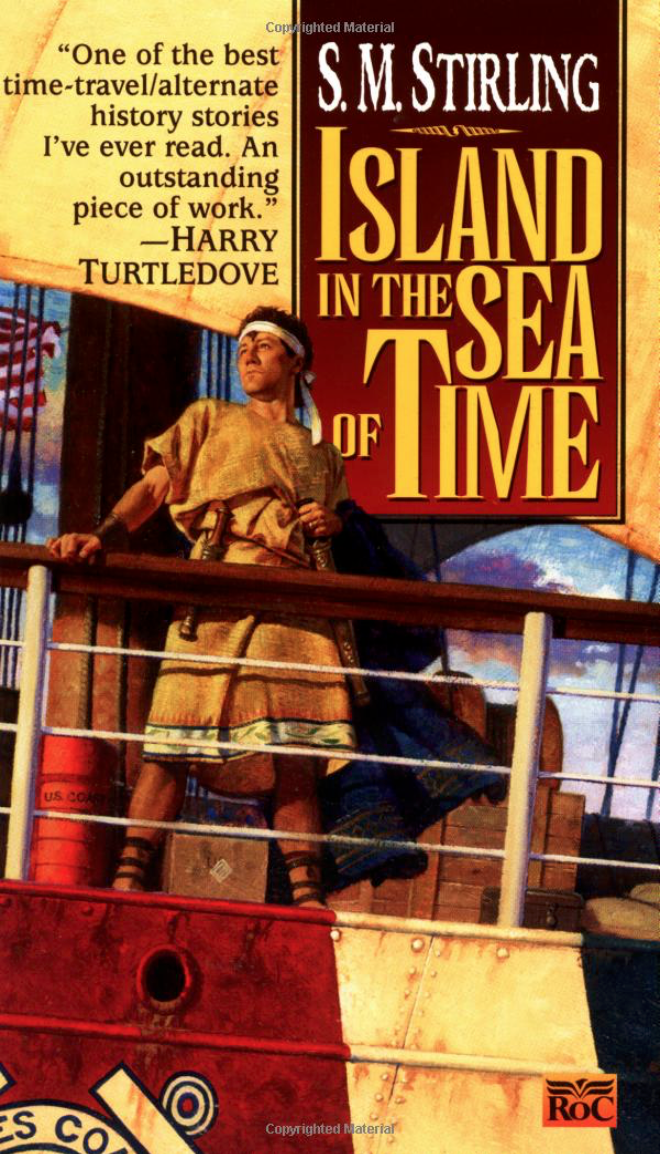 The story of an allo cis het white guy on a ship, fighting to instill ‘Merican values on Bronze Age savages–except for the blonde ones from England.

This is actually the story of a black bisexual woman on a ship…fighting to instill ‘Merican values on Bronze Age savages, but falling in love with one of the less-savage blonde ones. That’s marginally better, or at least it would be if the protagonist had been written with less emphasis on how incredibly black she was.

Nantucket Island (which, to be fair, is really moderate-liberal white) is, for an unexplained reason, plucked from reality and dropped into the Bronze Age. Same place, just different year. The inhabitants must figure out how to feed themselves, which involves figuring out how to trade with the humans around them. They have +10 in nice ships, everyone seems to have a Japan fetish (katana! but also they never think of going to Japan…), and the usual number of people who want to rape and plunder.

It was a very immersive world. I loved the discussions of the technology and how it needed to be adapted, and loved the idea of first contact scenarios. The struggles on Nantucket between the islanders were some of the most compelling scenes, as the group worked on the hows and whys of their isolation, and how best to survive.

Noting the white guy on the cover, I was more than a little surprised to find this had a black woman lead, and that she got not only a romance line, but it was with another woman. The romance was sweet, with a good amount of sexual tension, and the sex scenes were tastefully done (sadly, not too explicit, but I’d never be mad at a book for that). So in terms of the f/f romance line, this book can have 5 stars. Pro tip though: the only people who get to write about Lesbian Bed Death are lesbians. Fight me.

Can we just stop with the rape as a common place tool trope? Please? Nantucket Island was transported back into the Bronze Age. My suspension of disbelief is already waaaay beyond my comfort zone. Would taking a look back in time to see that oh, rape was actually not as common place as everyone thought (which is increasingly being found to be true) be so hard? If you must have rape, does it need to be titulating? (Hint: the answer is no.)

Also, you know what is bullshit? Raping a woman and then having her turn to women. That’s not how this works. That’s not how any of this works. If every raped woman became a lesbian, well, this world would look a lot different. Being raped doesn’t make you gay. Period. Being gay makes you gay.

It simply is not necessary to point out the otherness of people every chance you get. Yes, we know the main character is black. Constant discussion of how she was hard to see at night, or her black arms reaching for something, or her nappy hair (really??) just further serve the white default narrative. The only Asian character is a sado-masochist (and not in the fun ‘we use safe words’ way), and the only other black character is a caricature. The two Jewish people end up together. The two bisexual women end up together. Gay men apparently do not exist, nor does anyone outside the gender binary. With the sheer volume of people we meet in this book, that’s really impressive, especially noting that the cultures do not seem even remotely upset by the f/f relationship. If it’s common enough to be NBD, where are the other queers?

This book actually reminds me of any number of the feminist utopia books from the 1970s and 1960s. It (and they) read as one person’s myopic view of a perfect future (or past), not giving any thought to intersectionality of identities, nor of marginalized voices. How progressive, to have a land only with women (for the feminist utopias of only white women who are all straight and cis)! How progressive, to have a black lesbian as a lead (in a book that uses the word savages to discuss basically every non-white culture)!

It’s not that I don’t appreciate the attempt, but with the amount of reading and researching that likely went into this book to get the ship lingo, navigation, and Bronze Age cultures at least somewhat technically accurate, you’d think a few sociological texts could have been consulted as well. Presenting Native American peoples as wife-beaters and/or cannibals and human sacrificers, Egyptians as nothing more than slavers, ignoring every Asian culture as not developed enough to worry about, while spending time with white Bronze Age cultures that seem rustic, but oh look, they’re actually really intelligent–is absolute horse shit. And the more ‘rustic’ of the British tribes, the ones who aren’t intelligent enough to work with, get called white Apache because they are so savage.

I really wanted to like this book, and it had some strong worldbuilding, but the racism, especially, was absolutely appalling. If you want to give it a go for the generally good romance line, or just to see a black woman kicking ass (but being reminded she is OMG BLACK all the time), then maybe hunt this one up at a used bookstore. Spoiler: the black lady lead never makes the cover on any of the trilogy books. No surprise there.

I refuse to provide buy links for this book. Those who read George R.R. Martin’s books will also likely love this series for the striking white savior / brown skinned people are savages parallels.