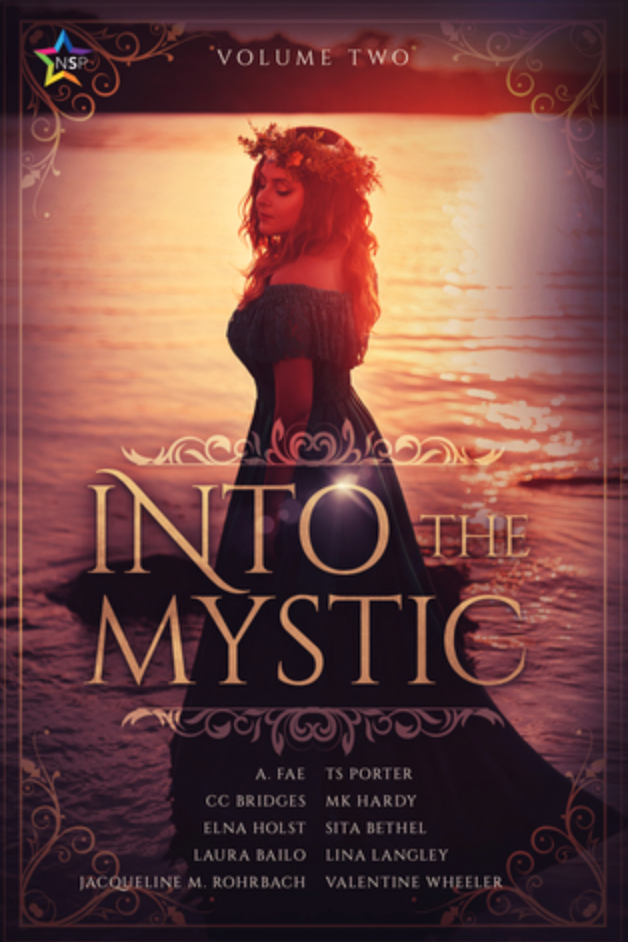 *fans self* Well, that was a thing. Excuse me while I go take a cold shower.

INTO THE MYSTIC, vol 2, was in a whole different class than the first one. Almost every story in this collection was descriptive, developed, and sensual in a way that vol 1 just never managed. There was once again just one story that seemed like it probably shouldn’t have made it into the anthology, and stuck out even moreso in this collection, since the general caliber of the stories was really out of this world.

Some individual thoughts on each story
Green Love by Elena Holst
This was a strong start to the anthology. I was a little concerned at first that the forest description was going on long, when I realized Elise was still woolgathering five pages in, but the reason for the extended intro became apparent a few pages later. In hindsight, I have no problems with it. It was fun to read a story in a forest type I know well (upper Michigan represent!), and I’d be lying if I said I’d never imagined what having sex with a tree would be like.

Dead Letter by Valentine Wheeler
Another strong submission, and I loved the slightly creepy undertones. The little epigraph at the start was confusing on the first read, and it wasn’t until I read the story again that it worked for me–which is basically how every epigraph works I suppose. The meat of the story was well paced and I enjoyed the sweet ending. It reminded me of the ghost story from the previous anthology (with the smiling woman), although DEAD LETTER was less creepy and more sweet. P.S. – Valentine Wheeler, if you do figure out how to be Captain Janeway or Dana Scully (reference to the author bio), would you let me know how you did it?

Seaside Escape by A. Fae
This one was the weak spot in the anthology. Redundant word usage abounded, the narrative wasn’t very tight, and the plot seemed to spin uncontrollably. The start was decent enough, and I was interested in Fiona’s character immediately. Being part of a pact to sell selkies to human men definitely hooked me. The sex scenes, too, were generally engaging. It was the storyline itself, and writing style, that just didn’t work for me, so much so that I had to DNF this one. Parts of it did rub me the wrong way, too, in terms of the morality of trapping women and selling them into sex slavery, but noting Ninestar’s policy on such things, I assume this was dealt with later in the narrative.

Dressed in Wolf Skin by Sita Bethel
This was a werwolf romance with a witch, which, generally is not really in my interest area. The story was plenty strong enough, and the werwolf and witch characters fleshed out enough that the story held my interest all the way through. I’d have liked to have seen a longer battle with the skin walker, but for a short, this was nicely done. The running gag with the goats was delightful.

Unraveled by CC Bridges
Witches and selkies were definitely the theme of this anthology. This particular short had a neat take on magic and magic users, so much so that I was grumbly that this was a short and not a full novel. The magic system and the main character, Summer, were both fleshed out enough that this short could have easily carried onto more pages. Hence, my only quibble with this piece was that I wanted it to be a book, not a short, so I could have had more time with Evil Biology Professor and the Forbidden Book.

The Holy Company by Laura Bailo
The start and middle of this short were really strong. I enjoyed the sexual tension (yeah wow did I enjoy the sexual tension) and the darker feel to the story. Anna and Sophie work really well together, and the mystery of the town is a strong hook. Sadly, the ending of this short fizzled for me, as I was left unclear as to what had happened. There’s resolution, but even after rereading the story, I don’t know what that resolution is. Sophie comes to a conclusion in the last two pages, but doesn’t in any way share it with the reader. 🙁

Vampire Hours by Jacqueline Rohrbach
Vampires are another one of those genres I can’t really seem to get into. I enjoyed the organizations gags throughout the piece, and the well described depression (that really resonated), but I couldn’t connect with the romance (?) between Janna and Stacy.

To The Sea MK Hardy
Look, full disclosure, I am a huge fan of MK Hardy, and have been ever since I read CHASING GHOSTS. The duo don’t disappoint in their newest short. The romance was well developed, the characters round, and the plot well described without being too obvious. The end was subtle without being lost on the reader. Basically, it was everything I’ve come to expect from MK Hardy (you two need to write some spec fic soon, please and thank you).

Holy Water by Lina Langley
Creeeeeeeeepy and I love it. I adore dark fantasy, and this was just perfect. The ghost was tragic, and beautiful, and never really 100% on the up and up. Maria Clara has a strong enough voice that I don’t find myself questioning how she gets away with seeing the ghost so often, or why no one challenges her strange sickness and health. Again, another really strong showing for the anthology.

Lighthouse Five by TS Porter
And then we come to the finale, and what a powerhouse it is. This is hands down the best story in the book, and another one of those authors that I want to immediately go buy the entire back catalogue of because of the sheer strength of this piece.

At its heart, this is a mermaid x human love story. Chris is a lighthouse attendant, isolated but not really lonely. Jewels is mermaid without all the sexy trappings of modern folklore, and is much more fish than person. Their romance is slow, and delicate, and practically a dance as their cultures and languages blend around one another. TS Porter did a magnificent job making the inevitable sex scene between fish and human not only flawless, but without any of the awkwardness one might expect in such an encounter. The friendship between Chris and Jewels seems completely organic, and both characters come across as strong, competent adults from very different cultures just trying to make friends and understand one another. I loved this short, and am now eagerly awaiting more from TS Porter.

INTO THE MYSTIC volume II comes out October 16th from Ninestar Press. You can preorder it here.