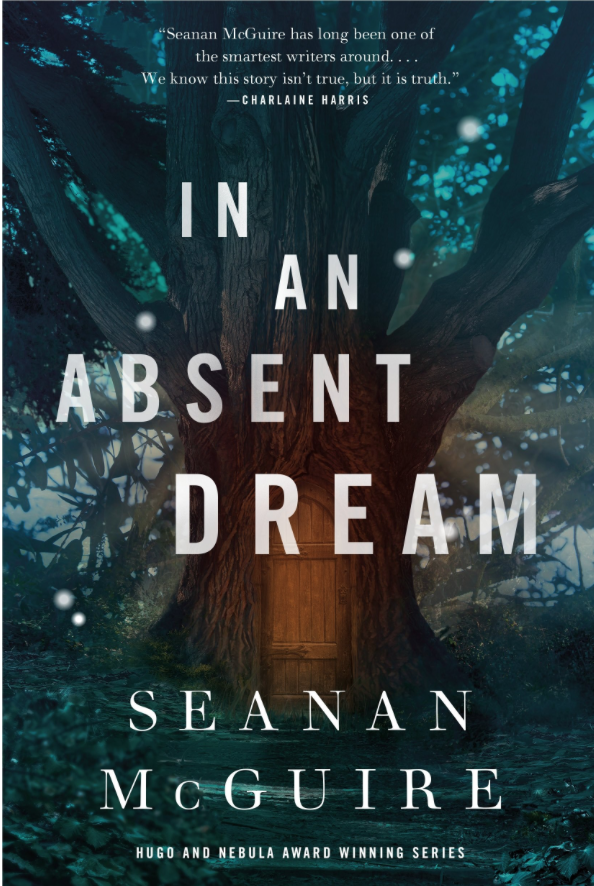 Review (note that quotes come from the arc, and may change in the final draft)

Lundy, a quiet, studious, rule-bound girl, finds a door to the equally rule-bound land of the Goblin Market. By her eighteenth birthday she must choose whether to stay in the market or live with her birth family. But Lundy, who has always loved loopholes, may not be able to find one big enough to avoid the consequences of making an unfair deal beyond her door.

How I ended up with the arc is sort of a portal fantasy within itself. I was an invited guest at OryCon 40 (Portland) this year, and Seanan McGuire was the author guest of honor. I had a booth with a few friends as well (a very queer books booth… you couldn’t miss us), and Seanan, whom I did not recognize, stopped by and ended up buying all three ARDULUM books (may she not hate them, please god(s)).

We got to talking and because it had been a really whirlwind of a con with a lot of homophobia and racism around, when she mentioned she was the author  guest of honor it still didn’t click who she was and I asked. So then she showed me her name tag and I did not drop dead on the spot, although I probably should have. I wanted to tell her how much I loved the Wayward Children series but of course could not remember one damn title and stumbled my way around with ‘oh I read your first and second book and reviewed the third…the one with the girl…’ while she’s looking at me with what I hope was bemusement and mentioning that she’s written lots of books, so ‘first one’ doesn’t really help.

Anyway, eventually my misfiring brain got out that I was a book reviewer with the New York Journal of Books and I was really upset because I missed IN AN ABSENT DREAM in the que, and someone else got to it first, so I wouldn’t get to review it. And then Seanan pulled an arc out of her bag and offered it to me. So even though I can’t get this review up on my normal official channels, I took that book, damn it. She even signed it for me. And she had me sign the ARDULUM books for her and I’m still recovering from that so excuse me while I fan myself.

We talked for like half an hour and I think might kind of sort of be friends now (I mean, we had an in-depth conversation about speculums and sex toys and if that doesn’t qualify past ‘acquaintance’ I don’t know what does), or at least ‘I wouldn’t hit you with my car if I saw you on the side of the road’ friends. Whatever. The point is that I HAVE THIS ARC, DAMN IT, and I’m thrilled, and I’m going to review the damn thing, even if it’s only on Goodreads and my blog. So with that…

Those familiar with the Wayward Children series may remember Lundy from EVERY HEART A DOORWAY as the counselor and right-hand assistant to the head of the school. She ages both incredibly slowly and also backwards, and IN AN ABSENT DREAM explores the origin of this strange aging, as well as Lundy’s world and door, similar to the other Wayward Children books.

Lundy as a character had a lot less, let’s say, distinction than some of McGuire’s other wayward children. I spent about the first fifty pages looking for that special thing that set the other kids apart, and it took me until almost the end to realize that her lack of that thing was actually what made her so unique. She’s quite. She’s a rule-follower. She has decently loving parents and a solidly middling life and aside from growing up a girl in the 1960s, there was very little going against her.

It’s that sort of SARA PLAIN AND TALL vibe that really drew me in. I connected with Lundy more than I have with any of the other wayward children, which is likely by design since each of the books targets a very specific sort of child. I also fell hard for the ‘rules’ of the Goblin Market, where children are allowed to go back and forth multiple times before their eighteenth birthday. That gave IN AN ABSENT DREAM a much more sort of fairy tale feel than the other books in the series, and gave Lundy’s choices less…seriousness? Concreteness? The flexibility made the doorway seem less ominous and definitely less final, which really made the gut punch at the end of the book that much more brutal.

While the other wayward children books have been fun, creative, delightful-if-not-dark-and-that’s-okay journeys, IN AN ABSENT DREAM read more like an emotional, coming-of-age journey. As always, McGuire captures childhood reasoning and childhood voice in a way very few adults are able:

Children begat adults begat children, now and forever, amen. She was in no hurry to reach those terrifying heights of adulthood; she assumed they would happen somewhere around the eighth grade, which was impossibly far away, and happened on the junior high school campus, where her father held no sway.

McGuire also delivers what has to be the best paragraph on sisterhood that I have ever come across,

Let us speak, for a moment, on the matter of sisters. They can be enemies to fight or companions to lean upon: they can, at times, be strangers, They are not required to be friends, or to have involvement in one another’s lives, or to be anything more than strangers united by the circumstances of their birth. Still, there is a magic in the word “sister,” a magic which speaks of shared roots and hence shared branches, of a certain ease that is always to be pursued, if not always to be found.

The use of authorial voice is equally as strong in this book as the others. Though where it tended to grate in UNDER THE SUGAR SKY, here it soothes and injects cautionary humor.

Her book fell from her suddenly nerveless fingers, landing in the dust of the trail. This will be important later.

There was action in this book, certainly, but it was less sword and sorcery (these events happening in the background and recounted and remembered more than anything) and more emotional action. As with all good fairy tales, lessons were couched in rules and childhood innocence:

yet still manages to deliver some sound critique on social constructions and the current political landscape.

Secondary characters were limited, which is perfectly expected in a novella. Of note, however, is the character ‘Moon.’ Born to the Goblin Market by a mother that abandoned her there, Moon and Lundy become fast friends. Friendship never really comes to Lundy from the ‘real’ world, and her pairing to the impulsive and perhaps-not-very-well-suited-to-the-Goblin-Market Moon is instantaneously genuine and satisfying. So well drawn is Moon’s character that McGuire even notes,

Let us pull back for a moment, and see things through her eyes–for while this is Lundy’s story, Lundy’s cautionary tale, it might as easily have been Moon’s.

Followed a paragraph later by the ominous,

A gut punch to the emotions, this book. Building like Pan’s Labyrinth where you know what is coming but the background is too rich and the characters too beloved to look away. And then it happens and you’re left with a sweet anger that you can’t really explain because you’re not angry, not really, but you wanted something different, even when your heart told you you wouldn’t get it.

This book was, is, childhood. So much more than its predecessors, IN AN ABSENT DREAM delivers echos of wild youth and the adolescent pursuit of found family. It buries itself deep inside the reader to dredge out memories and emotion maybe best left buried–regurgitated now to settle back amongst Lundy’s journey and her critical mistake. As with all the Wayward Children books, the reader is left with the yearning of where is my door?, but IN AN ABSENT DREAM asks too, would my choices have been any different?

You can preorder IN AN ABSENT DREAM in hardback here, audio here, and ebook here.

I’d cry if it wasn’t so damn funny. Also, where is my damned door?