This is a review for the third and final volume in a series. Read the review for volume one here and volume two here. 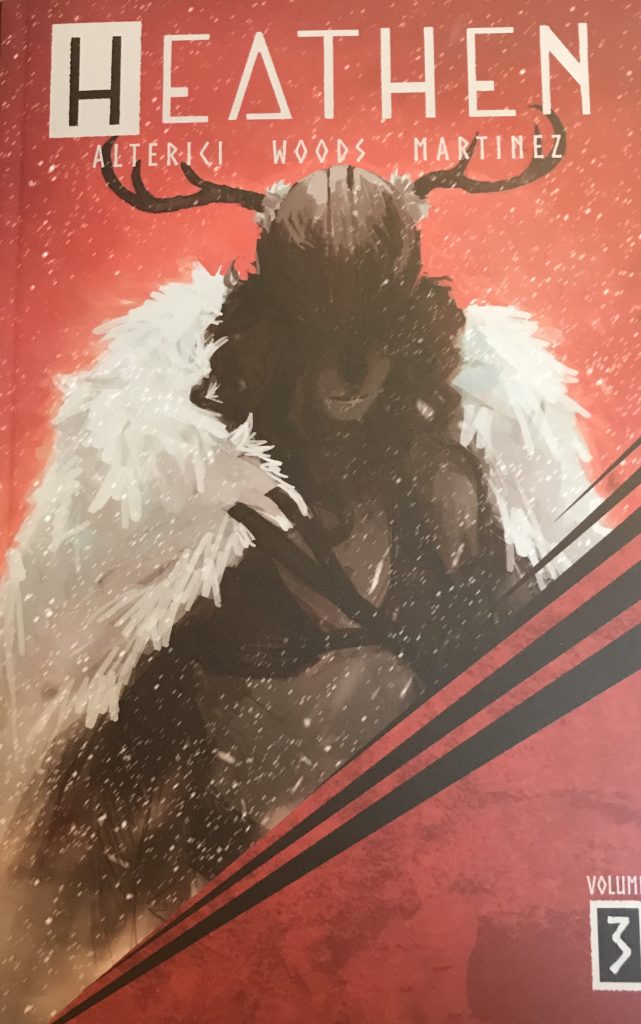 In the final installment of HEATHEN, Aydis takes on Odin in the Land of the Gods while her friends battle Odin’s army. It’s valkyrie against valkyrie, Aydis against the gods, in this rushed and disappointing end to the HEATHEN storyline.

I don’t have too much to say about this volume, as I found it a general disappointment all around. I know Alterici had a ton of issues with publication and rights being tied up with various companies, and I’m guessing by the time she wrote this, her head wasn’t in the game anymore. Still, the first two installments were just so good that to have it wrap with a mediocre ending left me grumpy. Even the cover art lacks the sheer joy we could see in the other two volumes. This reads more as a ‘I have to finish’ more than ‘look at my amazing world!’

We begin with a lackluster chase scene in which Aydis is captured by giants and taken to see Odin. During their journey we get a story about an old tree that the gods used to consult with the Norns about governing the human world. Aydis befriends the giants just as they leave her at the door to Odin’s castle, and she promises to free their mother.

She enters and is immediately captured by Odin and thrown into the dungeon.

Meanwhile, the valkyrie Aydis saved and did not marry whyyyyy finds the girl Aydis once (almost?) kissed. They begin traveling together. Various side character break Aydis out of her cell and she is lead to the mystic tree discussed earlier (that did not appear in earlier volumes that I recall, making it very Plot Convenient).

Not-wife and Almost-Kissed team up with the all-lady pirate crew and take on Odin’s army, which includes the valkyries. They…talk it out.

Aydis sees a naked woman in the tree, then a baby, which apparently represents her mother and her, and gives her the will to live?? She leaves the tree and goes to again confront Odin. Not-wife and the very scantily clad Aphrodite-like valkyrie go with her. Aphrodite takes pity on Odin who is cowering in a corner for a reason I’m not too sure of, and convinces Odin to undo his wrongs and free Brynhild (not-wife). Aydis tells him the story of her mother and he relents. Aphrodite gives Byrnhild the leader-helmet of the valkyries and everyone lives on.

With a degraded art style, what felt like a forced and often too-convenient plot (and plot devices), and no resolution on the ‘loves the ladies’ thing which started the whole series, this volume was definitely a letdown. I hold out hope that Alterici will revisit the series later and give it the ending it deserves.

You can check out volume three here.