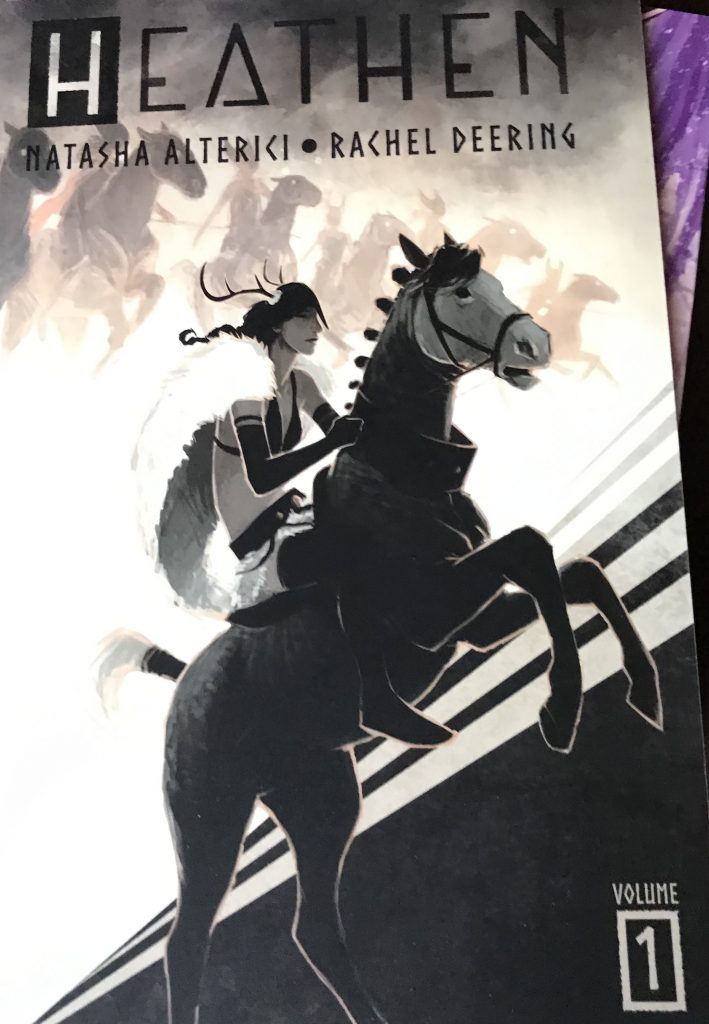 Viking woman Aydis lives at a critical moment in history, where the old gods are falling away and new gods creeping in. Her people attempt to hold strong to the old ways, and are not forgiving when Aydis is caught kissing her childhood best friend. Her father is given the choice – force his daughter to marry a man, or kill her.

Aydis has no desire to marry a man. Her father takes her into the woods with her trusty (tiny) horse Saga, and exiles her instead.

Alone for the first time, Aydis sets out on a hero’s journey to prove her bravery by freeing Brynhild, former leader of the Valkyries. It is said that Brynhild can only be rescued from her ring of magic fire by someone ‘worthy’.

Aydis sees no reason why that can’t be her.

These comics came out ages ago in digital, and I backed the kickstarter also ages ago to get the rest of the volumes and the print versions. Volumes one and two just shipped a few weeks ago, and it was a delight to get to hold the artwork in my hands and take my time reading through Aydis’ adventures.

I do not generally read comics, so something has to be just right for me to buy them, especially if I intend on keeping them. Aydis is the kind of heroine I love–bumbling, willful, and sure of herself despite what society thinks. Her (eventual) affair with Brynhild is VERY slow burn, so don’t expect any action in volume one (or two, for that matter). Instead, savor the imagery and worldbuilding as Alterici and Deering take you on a savory walk through Norse mythology. There are adventures along the way, talking horses (+10), warring gods, scantily clad women in snowy landscapes (+20) and some full page illustrations that tear at your heart.

Heathen appears to be available on Comixology right now, though I know there are some rights issues going on so I am not sure how long it will be up there.