Warnings: gender dysphoria, verbal abuse, TERF antics that may be triggering for some readers 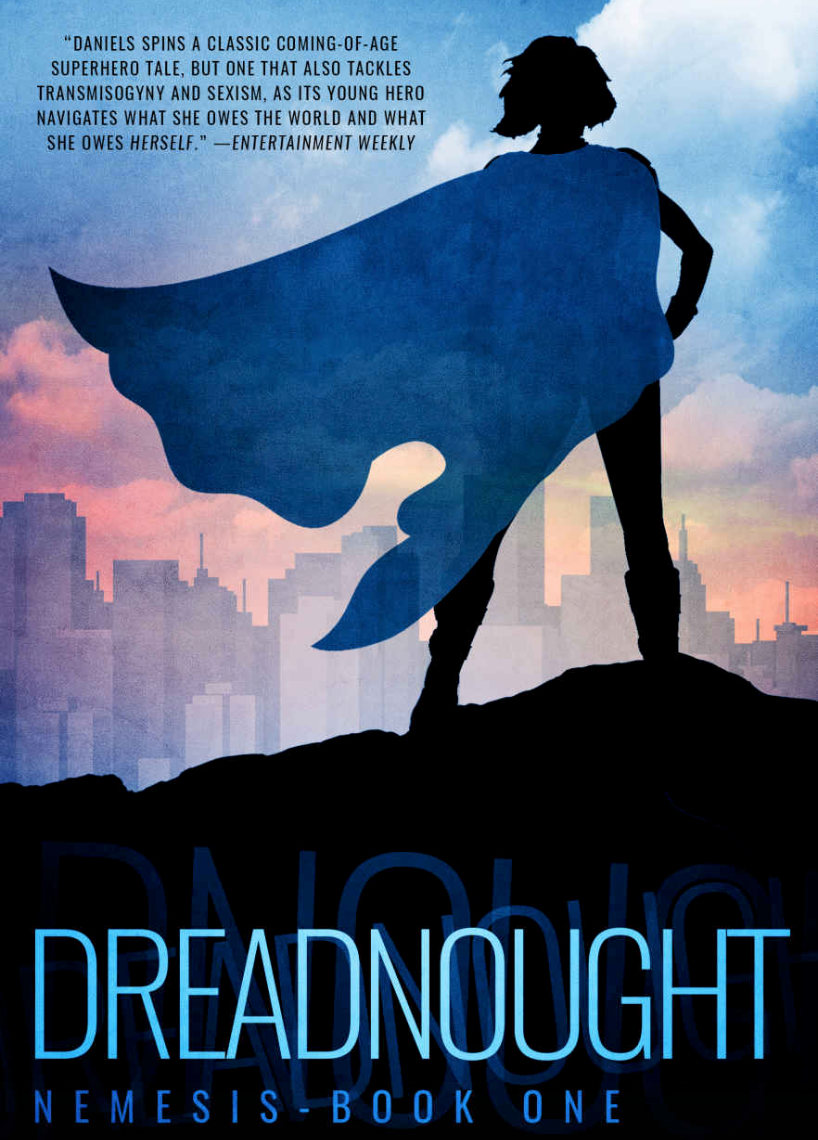 Danny, a trans girl, is hiding behind a dumpster, painting her toenails and enjoying some alone time, when the superhero Dreadnought dies right in front of her. She inherits his powers, among which include the ability to take her ideal form. But while Danny is delighted with the sudden and mostly-absolute gender change, those around Danny, especially her parents, are not. Also super villains and stuff. Bam pow. You know how it goes.

Let’s just hit the (trans) nail on the head

This was a great book. It was written by a trans woman, and the realness of the emotions really shine through. As a trans reader, I deeply connected with Danny on multiple occasions, and appreciated the author’s diverse probing of trans issues–particularly the subtleties of dysphoria (for instance, Danny doesn’t take issue with her junk). I love how the superhero ‘thing’ was continually pushed aside by Danny because she just wanted to revel in looking like a girl, finally, and that even though Danny has the heart of a superhero, that’s not what this book is about.

Not all of the transition accounts will resonate with all readers, of course (and the trans experience is as unique as the human experience). Danny’s discussion of what it’s like to have tons of estrogen coursing through her system instead of testosterone would have struck me fairly sexist even a few years ago, although I’ve had enough trans friends on hormones describe much the same thing that in this instance, it resonated.

This book shares a lot in common with C.B. Lee’s NOT YOUR SIDEKICK, in terms of slice of high school life and also superpowers. Both deal with prominent issues, although NOT YOUR SIDEKICK definitely spends a greater proportion of its plot on superhero dynamics, while DREADNOUGHT merely warms up to them, spending more time on Danny’s journey. DREADNOUGHT also doesn’t pull any punches, and readers are walked through transphobic parents, entitled male BFFs, and a particularly problematic TERF superhero (who came across more as a caricature than anything else, and the narrative would have been stronger, in my opinion, if her attacks were more subtle).

In many ways this book read more like a prequel, or an extended prologue, to a greater story. That’s not to say it didn’t stand on it’s own, or wasn’t enjoyable. Indeed, the pacing was excellent, the emotions hard hitting, and there was a depth to the story I was not expecting. That Danny is not only trans but also a lesbian was an unexpected bonus, and I do look forward to where the romance line might lead in future books.

While I have read some critique of the overt transphobic reactions in this book, and while yes, they could be potentially triggering (there was at least one instance where I had to put the book down and take a walk), I think it bears mentioning that cis readers are often not awake enough to the subtleties of implicit bias. If Danny’s experience was diluted down to extended stares from classmates, indifferent and chilly parents, and a superhero legion who tolerated her presence but never really welcomed her, I don’t think this book would reach nearly the same audience. The overt transphobicness of Danny’s interactions may be somewhat dated, or seem over the top, but they certainly are not over, by any means, for queer teens, and there are plenty of us older trans people who remember those types of days all too well.

After a slew of disappointing books, it was great to be able to immerse myself in a world where a trans girl gets to really get her wish. And if that wish is to look like a (female) supermodel, and she gets superpowers to boot, then, well, maybe we can start tipping the scales away from all those cis het white dude superheroes with the washboard abs. It’s about time trans girls got to look hot in spandex, too.