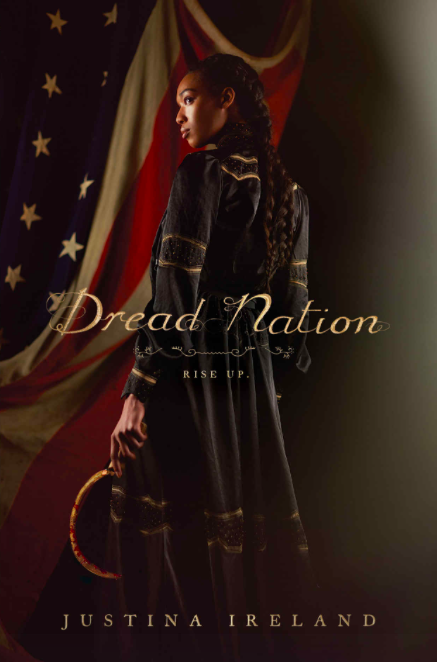 In an alternate time (the darkest timeline??), the Civil War is cut short by ZOMBIES! Both sides must stop fighting to focus on the undead, but old tensions remain. A law is eventually passed requiring black and native teens to all train at boarding schools to fight the zombies, which is both effective at educating the children, but also puts them in much more danger than their white counterparts.

Jane, a student at such a school, is impetuous and deadly with sickles. When she isn’t sneaking out at night to save white people on the road from zombies, she’s failing her etiquette lessons and dreaming of returning home. Well to do racists have a different plan for Jane and the other graduates of her school, however, and with the undead developing some sort of greater hive intelligence, it will take all of Jane’s training, both in etiquette and weapons, to save herself and those she loves.

The pacing was fantastic and the characters well rounded. The portrayal of racial tensions from a young black girl’s view was utterly compelling, and the various macro and micro aggressions included in the book would make a great primer for anyone looking to better understand the Black Lives Matter movement.

The Native content, unfortunately, fell well short. An excellent analysis of that area can be found at this link, so I won’t belabor the issue other than to note that in placing black people in a (fantasy) historical context that was traditionally occupied by Natives, some erasure issues cropped up.

Queer content takes a backseat in this book to racial issues, although Ireland does take the time to specifically discuss Katherine’s aro/ace leanings, and Jane’s encounter with one of the other girls at the school. Canon bisexuality is fairly rare in SFF books these days, and though Jane spends most of her time recounting a boy, it’s nice to see mention of her interest in women, too.

The plot has an excellent number of twists and turns, some of which were unexpected. Ireland kept the tension high even in ‘fancy dress’ scenes, and enough attention was given to clothing affecting fighting that it was easy to imagine being in the clothes yourself. In particular, the multiple discussions of the effects of corsets on running and fighting, as well as breast binding, was critical in building the realism of the book.

The science of the zombies too, while not amble, provided enough for reader conjecture. Their evolution through the book was a particularly enticing hook, so much so that I was disappointed we didn’t get more information on them in the end. It looks as though DREAD NATION might have been aiming for a sequel, which I would happily ready.

To fight zombies in a lacy dress but no corset on the Wild West frontier, click here for paperback, here for audio, and here for ebook.

Hey readers! Did you know you can subscribe to this blog? Don’t miss out on reviews and Ardulum content ever again! Look on the right sidebar for the grey box that says ‘Get my blog posts via email,’ enter your email, and hit subscribe. It’s that easy! (if you can’t see it, just scroll down a bit.)