Warnings: some potentially problematic interpretations of asexuality and aromanticism 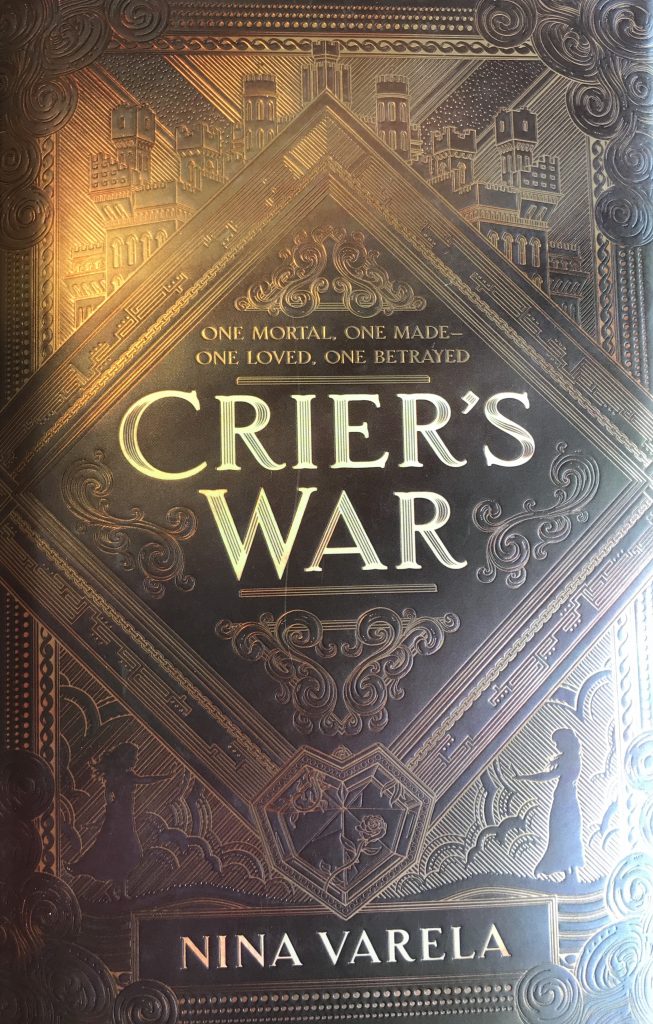 Once upon a time there was a queen so desperate for a child that she had one Made. As with all things involving royalty, Made people became all the rage, and soon the continent was filled with Automae.

Like any good sci fi tale, the Automae were treated as servants/pets and of course, rebelled. Automae won the war and now rule over humankind, occupying the latter’s former palaces and social structures.

Enter Ayla. Orphaned by Automae slaughter (including her twin brother…maybe), her only goal in life is to bring down the Made and cut off their source of power–a special mineral that must be mined from specific source. More immediately, she can best hurt the Made by killing Princess Crier, and very early on in the book she is conveniently hired as the princess’ handmaiden.

Of course, feelings get felt. Ayla’s never had much interest in romance (only REVENGE) and Crier is an automae (who are canon asexual and aromantic… in theory). Turns out that Crier may have the Flaw of Passion inside her, which her fiancé’, Kinok, has no problem holding against her.

While Crier struggles to identify friends and enemies at court and understand her (lack of) place in the monarchy, Alya’s narrow view of the Made is threatened by Crier’s attempts at friendship. A human rebellion is also brewing, and Crier and Ayla must decide which side they are on before the truth about Ayla’s past is revealed and the balance of power is forever changed.

CRIER’S WAR is an f/f enemies to ‘lovers’ tale, and very much a setup book for a longer series. The worldbuilding is fun if not a little generic, and the pacing distinctly YA in that an inordinate amount of time is spent mentally rehashing events and feeling feelings, which drags down the pacing. For a YA book, the pacing moves at a strong clip. For an adult book (which it isn’t, so it shouldn’t be judged as such) it is slow.

The two POVs, Ayla and Crier, are distinct and easy to empathize with. Crier has many android stereotypes, including lack of sexuality/passion, problems with emotion, super strength, etc. Ayla is all hot-blooded passion, most directed at the kill side of things (yay! stabby lesbians!). They’re a natural pairing, and Varela does a nice job of slowly ramping up the tension between the two and then backing it down with real problems, such as, how do you kiss a girl whose family killed yours?

The worldbuilding takes an interesting look at the Automae and humanity. While recent fiction has driven stories of androids wanting to improve upon human tech and dwellings and such (and certainly never retaining human rituals), CRIER’S WAR shows the POV of androids who actually embrace and retain all the silly little bits of human culture, like marriage and birthdays. It’s a very strong showcase of the book’s central theme, that the Automae, despite being Made, are human.

The only real issue in the book comes from how it interprets what makes us ‘human.’ Crier believes for a good part of the book that she is Flawed with Passion. This ‘allows’ her to fall in love with Ayla and become, as the book presents it, more human. The Automae are described, functionally, as Data from Star Trek, complete with ‘going crazy if your emotions go into overdrive’ trope. They’re beautiful, but heartless.

A few have bucked that stereotype and are presented as more compassionate and more human–by taking lovers. Crier is also presented in a similar light, where it is her love for Ayla and budding sexuality that turn her away from the ways of her android people and help her better understand humanity, and empathy. And, yes this sort of development is a fairly common trope in sci fi and fantasy, it still comes at the expense of an often trampled part of the queer spectrum. Sex, attraction, desire, romance, these aren’t things that make us human. For many they are an important part of self, but for others they aren’t. Asexual and aromantic people are still human. They don’t need to fall in love to have empathy, much as atheists don’t need to find religion to be good people.

Representation gripes aside, CRIER’S WAR is exceptionally well written, with an almost lyrical prose reminiscent of THE TIGER’S DAUGHTER (which was not without its own representation issues as well). The book does not stand alone, in that no plot arcs are resolved and the reader must continue to the next book to continue the narrative, but the character development is well worth it.

The cover is gorgeous, and well worth having in hardback for the embossing and delicate bronze imagery. The plot is complex enough that teens would likely be deeply engrossed (It’s not a trope if its your first exposure to it!), and the tandem coming-of-age stories of Ayla and Crier should resonate with many younger readers.

It’s not a book I would have on my own bookshelf, but it’s one I would hold for my kid, for sure.

You can mine some Iron Heart and make your own android in paperback here, ebook here, and audiobook here.