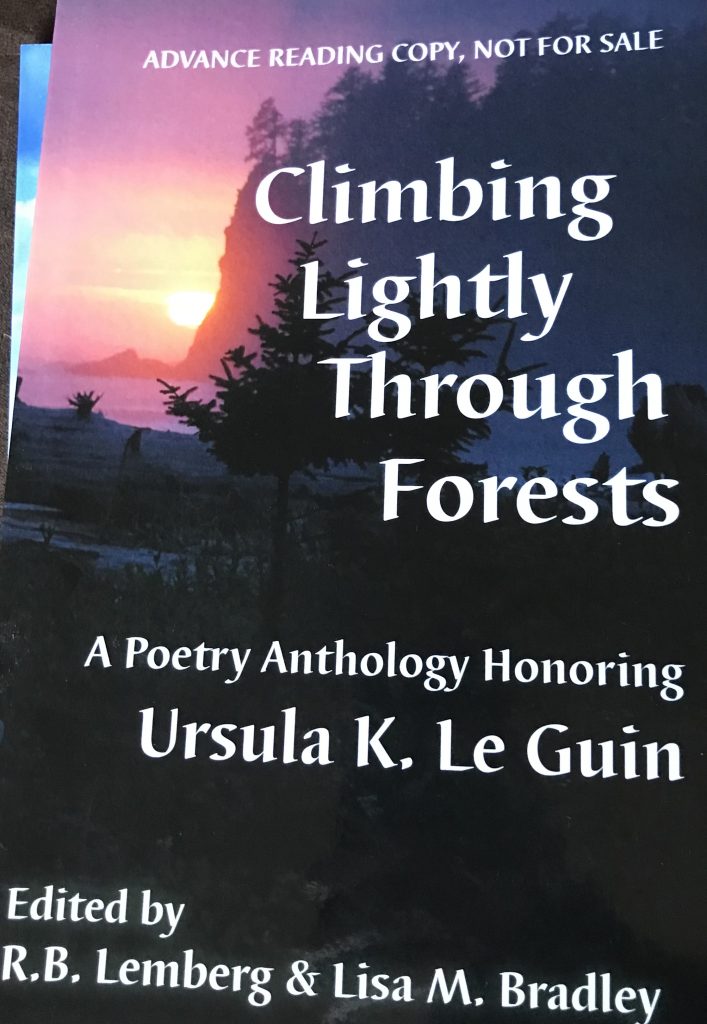 Ursula K. Le Guin is a legend amongst writers, primarily in the speculative fiction realm and definitely amongst queer people. This anthology of poems and short writings pays homage to Le Guin’s own poetry, which tends to be her lesser known work.

I’m not a big poetry fan in general, but am a Le Guin fan. Of the poems in this collection I found myself drawn to the wood-centric ones the most (go figure), alternating between delight and horror at the misunderstanding of wood anatomy. And so while yes, generally the works in this book are smooth and thoughtful, to me there was a distinct break between reading Le Guin’s own work, informed by deep love and study of the natural world, and the homage poems, which keep the cadence but lost the authenticity.

In Distance, Interval, by MJ Cunniff, the imagery starts out strong and visceral, with

which is a fantastic visual of the Oregon coast, bringing together multiple tree images into the stark reality of our oceanfront. But later the poem gives us

How terrible to be the driftwood and forget the water / surging through its columns, xylems veining / furiously up into the air, becoming buds and leaves

I understand the concept here is to evoke sadness in the reader that the wood has left the ocean to be stranded on the beach. But A), there’s plenty of ocean water still in that wood, B) xylem is already plural, and C), xylem can’t surge anywhere or become anything (though I appreciate that they got the ‘up’ part right, as the old adage ‘xylem goes up, phloem goes down’ reminds us).

This illustrates the push/pull issues I had with the collection. I wanted the stories to be as authentic as Le Guin herself, and while yes, no one is Le Guin, a certain amount of research is necessary even in homage poetry.

The issue persists in Galloping Hooves by Tricia Knoll. The poem begins with a Le Guin quote, “The grain of a wood is the language of tree.”

Which is wholly true. You can tell the entire story of a tree in its annual rings. However the poem goes on to deeply misunderstand what that means:

Their quiet script shows / as growth rings that sucked water, / how the carpenter lined up joins / so that end trains trace / flecks of music notes

(there’s a typo in there, but this is an ARC so that’s to be expected). Again, issues with understanding wood anatomy. Growth rings do not suck water. Water does move through wood cells, in hardwoods primarily through vessel elements (as I assume the author is thinking about??) but nothing is ‘sucking’ (though there is some physics involved). It’s just a very weird metaphor that doesn’t work if you have a functional knowledge of trees. Slightly less irritating, but irritating nonetheless, is the idea of a carpenter lining up joints (I assume that is what was meant there) with end grain showing. End grain makes for the weakest joints and most styles dictate covering as much of the end grain as possible. Was the author trying to say something with this obvious misalignment? I don’t think so, because the stanza lacks greater depth other than ‘wood grain looks like music.’

This is not to say that all the poems had issues! There were some perfect gems, such as Redwood Houses by Amelia Gorman:

And perhaps I like this one more because it’s more of letter to Le Guin, instead of an attempt at her voice.

You treed your dreams in your lungs, grabbed their roots and weaved them around your throat and legs.

You’re too unripe to have seen everything.

I mean, WOW to that. The imagery of roots in the lungs, growing like fungal filaments that could choke or break free, strangling a person from the inside out, yet still being too unripe…the power of this poem is enormous.

And of course, there are notes about gender in a few poems, such as this stanza from Until the Ships Came  by Nicole Field

We did not want the all same things / Because of some flesh on our chests, / Or cleft between thighs. / For time uncounted, / We’d lived unburdened / By external gaze / Of people who would view these bodies / As synonymous with wants / And needs.  / As we tried to explain, / The future we told / Was a past we’d lived: / Where all people went unjudged / On the shapes they saw; / Where gender was not based  / On a body / They’d had no choice inhabiting. / And that flesh / Would not become / The center / Of their internal world

which is very in the Le Guin style. A group of all female (not all women) islanders meet men for the first time. It’s lovely in that it keeps the same gender discussions in it that Le Guin always had, and continues to directly contradict and chastise feminist utopian literature of the past (HERLAND, anyone???).

Finally, I leave you with Dragon Haiku by Mary Vlooswyk, which is a wholly perfect homage and stand alone:

CLIMBING LIGHTLY THROUGH THE FORESTS releases January 15th, 2021 from Aqueduct Press. It does not appear to be up for preorder but you can find its information here. Wood anatomy quibbling aside its an excellent read, whether or not you are familiar with Le Guin’s work, and especially if you are a fan of the Oregon coast.