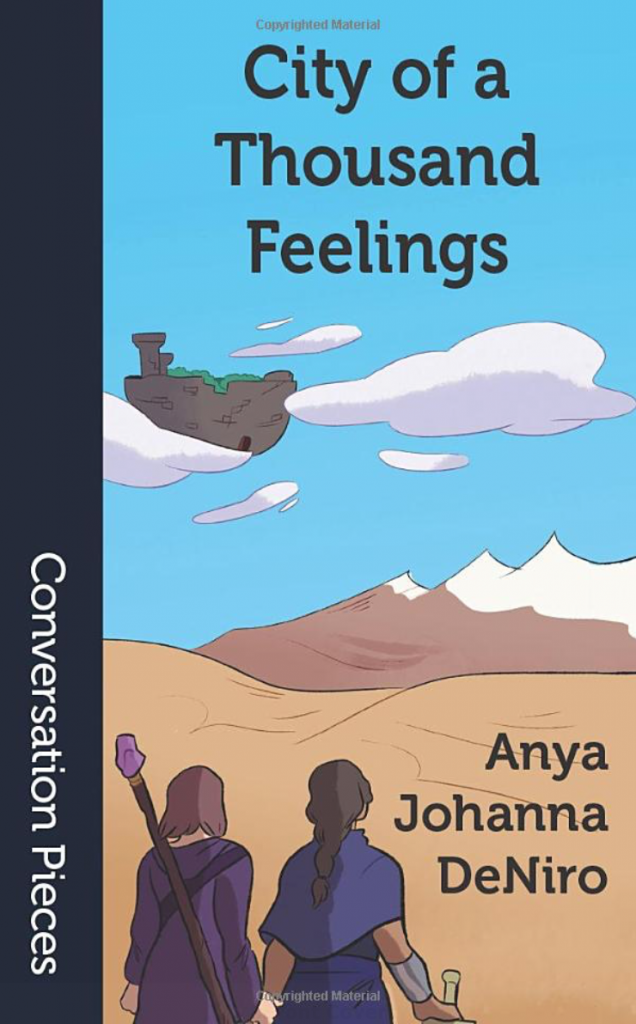 In a short story spanning thirty years, two trans women are outcast from The City, a place where emotions can become physical manifestations. They return in an army to take the city, face numerous hurdles, and eventually battle necromancers for control of the place they yearn to belong, but can never again be a part of.

I… don’t really know how to review this book. It’s short, only 81 pages long, and in those 81 pages the author attempts to set up thirty years of epic fantasy. It’s so bare bones in places as to be comical, but the emotions are dead-on.

“They even convinced me, when I was young, that I would be able to find a home with them. I threw myself in my training, but I started to realize that–I was not a boy. And they made me feel like that was the most horrible thing in the world.”

The strongest aspect of the book is the critique on lesbian culture. Trans women are too-often excluded from lesbian and wlw spaces, and the book hits this issue on the head in this scene, where the women are returning to the city that exiled them for being trans:

Most of these are monuments to women in love with each other, which might have been found “safe” and unremarkable in a more serene time. Love that is pure and unassuming and forced to die by exposure.

Bits of queer community elements can be found in the book as well, such as here:

When women like us start out, it’s easy to fall for someone who’s further ahead on the (more or less) same journey. It’s often mistake for romantic love, but that is rarely the case.

My favorite section of the book is the end, where a strange little bit of poetry adds to the worldbuilding. Of particular interest:

In Mystery’s old village, before she was stolen by the corpse-mongers, children are born with two souls, with one sacrificed to the forest goslings. Mystery’s pretty sure they screwed up.

A complicated (sometimes too much so–it took me three weeks to finish this 80+ page book) read, the trans narrative and struggle for acceptance in CITY OF A THOUSAND FEELINGS will resonate with  trans readers, as well as anyone who has lost acceptance over an innate aspect of their being.

You can buy CITY OF A THOUSAND FEELINGS here.