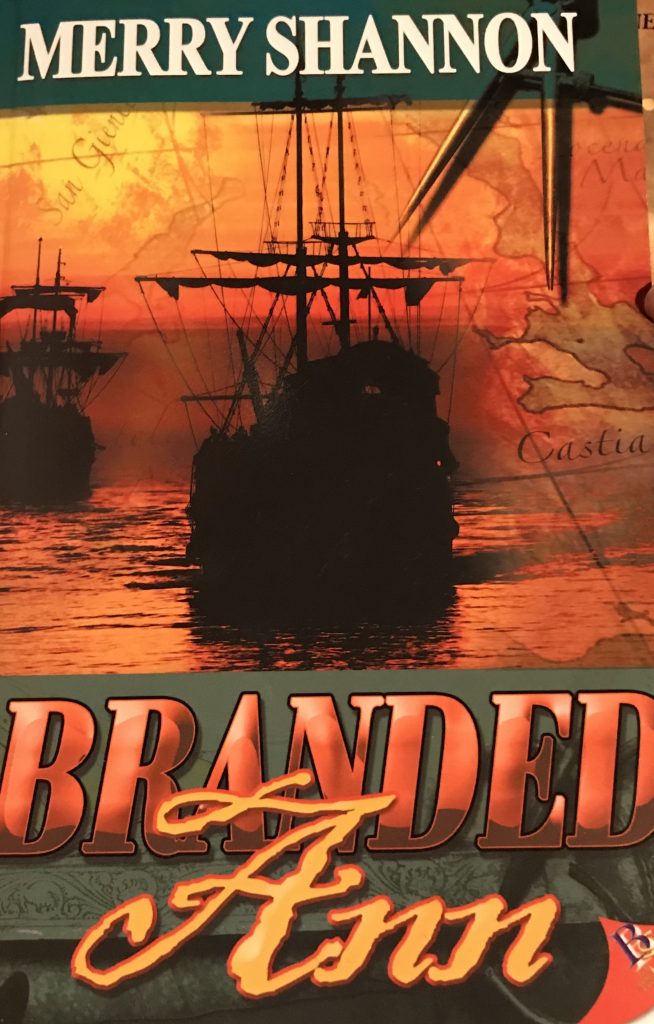 Violet, former prostitute now merchant-wife, is setting off on the vacation / move of a lifetime with her new husband. They’re headed to Jamaica, where her husband’s land holdings and wealth will make her a queen among the natives (don’t worry, it’s not a colonial narrative) and allow her to leave her past behind.

Barely into their voyage, Violet’s ship is taken by pirates, who are lead by Branded Ann, a “woman with eyes like ice and a face marred by a mysterious cross-shaped scar.” But Ann isn’t after Violet and her husbands possessions, nor is the ship carrying any worthwhile cargo. Ann is after a portion of a map that will help her translate the portion she carries, and allow her to find her father’s hidden treasure.

None of this is of much interest to Violet of course, who gets to watch her crew and husband murdered. Violet makes some key missteps and Ann, who will kill anyone who looks at her but who can’t stand rape, has to take Violet under her protection to save her from the crew (this is all very well done, I have no objections to this scene). Violet has no intention of serving Ann or the crew, except as a scullery maid. Hence she’s left to scrub decks and make friends with the cabin boy–and slowly earns the respect of part of the crew.

As Ann’s scheming takes the crew farther afield, into dangerous waters that could spell disaster for the ship and its crew, Violet and Ann must learn to trust each other as a mole on the ship, other treasure seekers, and Ann’s own crew plot to kill them both. Trust isn’t something that comes easily for the merchant’s wife or the pirate, and the reader gets treated to the very best of the enemies-to-lovers trope, while on the high seas, and surrounded by murderous pirates.

Much like SWORD OF THE GUARDIAN, BRANDED ANN combines the very best fantasy tropes (herein, pirates) with my favorite romance tropes in a skillful, suspenseful, and hot stand-alone book. There’s a real plot that I actually care about. Both Violet and Ann are three-dimensional and have their own motivations. They have unique voices. The crew of the pirate ship are complex and distinct, and act with the moral grayness of, well, real pirates. There’s a reasonable, on-page sex scene and plenty of sexual tension before it, swashbuckling, fun outfits, a misfit kid, and a pirate with a heart of gold. Seriously, what isn’t to love in this book??

Unfortunately, like SWORD OF THE GUARDIAN, this book does have some tired racist tropes, primarly in the form of Black descriptions:

Then there was Mason, a giant of a man with skin so black it shone like polished ebony when he sweat in the sun. Rumor had it that Mason had originally been captured from Africa by pirate slave ships, and the captain had been so impressed–or perhaps intimidated–by the enormous man that he’d recruited him.

The book is surprisingly realistic in how it portrays the brutality of pirate lives, though it does so without glorifying violence or giving us voyeuristic rape scenes. It’s a fine line not many authors can walk, and Shannon does it with grace. Be warned, however, that there is rape of Violet, though it is off page and no actual portion of the rape is discussed other than Violet’s frustration over the encounter.

Somewhat more concerning is one of the pirate crew propositioning the ten-ish-year old girl who ends up stowing away on the pirate ship, who Violet takes under her wing. Again, it’s just a proposition and nothing happens, but it does serve to really enforce the real brutality pirate life, and the very complex morals of Branded Ann’s crew:

Saunders reached out and took hold of Charlie’s arm. “Aw now, Sister, that bunk of yours is awful tiny, ain’t it? Maybe this little one ought to share berth with me.” The lecherous gleam in his eyes made Violet sick to her stomach. “What do you say, moppet, you want to come sleep next to your Uncle Saunders?”

There’s also a concerning passage from Violet’s past about a Gy*sy woman who is paid to give her an abortion, and the effects of said potion. So, racial slur and problematic context, in a one-page backstory.

Racial and rape issues aside, BRANDED ANN is decidedly well-written and walks the perfect balance between romance and adventure. With a publication date of 2008, some of the issues are more forgivable (rape, in particular, seemed to be almost required in fantasy books from the 1980s-about 2010) than others (at no point has the slur Gy*py been okay unless you’re Roma). Readers will need to decide if they can put the racism aside for an otherwise delectable adventure.