This is a review for a second book in a series. To read the review for the first book, click here. 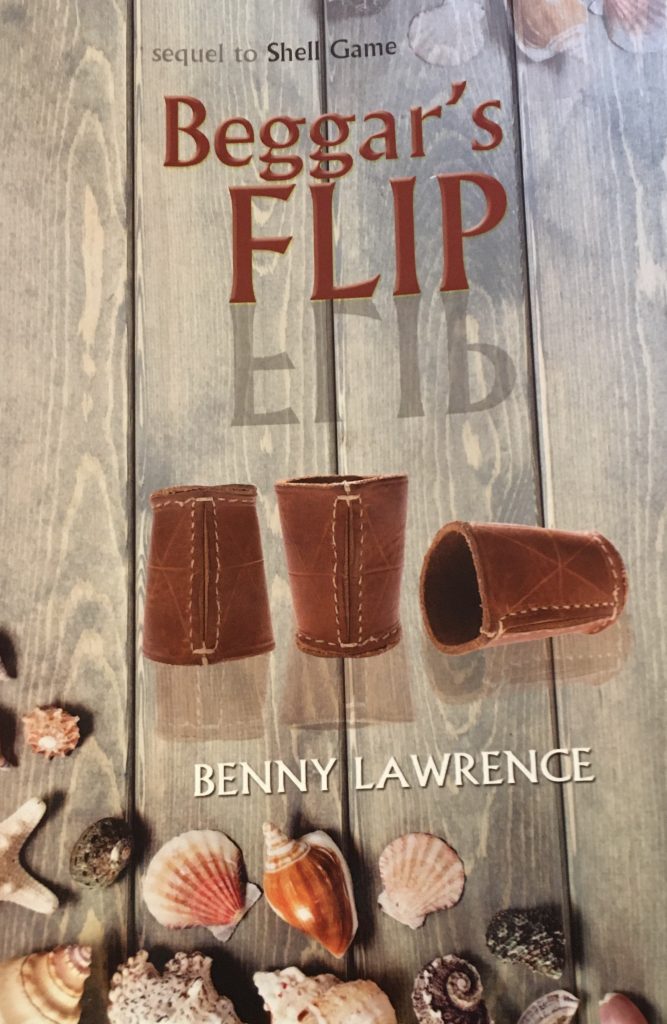 In this (much anticipated) sequel to SHELL GAME, Pirate Queen Darren must return to her home of Torasan Isle and mop up the mess her father created. Darren was permanently exiled from Torasan, however, and returning, especially with a female lover, is not going to go over well.

Lynn, Darren’s ‘slave girl,’ is plagued by horrible flashbacks and nightmares of her step mother and the abuse she suffered in book one. Lynn knows Darren has to go home and become the noble she’s long tried to deny existed, and Lynn must find the strength within herself to let Darren go–even if it means losing her forever.

BEGGAR’S FLIP picks off right where SHELL GAME leaves off, once again transporting the reader onto the high seas with all their favorite crew members. Darren is still a foul-mouthed do-gooder running from her past, and Lynn is still a bossy little sub in the hero making business. FLIP forces both of the heroines to begin confronting their past trauma: for Lynn, her history as a serving girl and the relationship with her half sister, and for Darren, her exile.

The book begins with Darren learning of the death of her father, and watching her oldest brother die, in short order. She also learns of a traitor on Torasan that she is tasked with unmasking. Though initially unwilling to return, Lynn insists that she must, more to gain closure and heal old wounds more than anything else. Also, things are getting heated between Darren and Lynn’s sister on the lead ship, and there are only so many noble arguments Lynn can take.

Eventually, of course, Darren consents. We all know who is in control of this relationship.

Darren is greeted with open arms at her return to Torasan Isle by yet another brother (Milo), who has assumed control. Few of the siblings her age remain, except for one younger sister who seems particularly prickly. Darren is offered a chance to help rule (under Milo, of course), and a hand wave for past discretions. Her pirate fleet is useful, and her brother has big plans to bring Torasan back from the brink of economic and social disaster.

But people are starving in the streets. Darren’s father has bankrupted the isle and revolution is in the air. When the people rise up against the nobles and Darren is captured, imprisoned, and tortured, it is up to Lynn to once again enter into the land of nobility, save her hero, and do what must be done for her sister, her sister’s lover, and the people of Torasan Isle.

The biggest problem with BEGGAR’S FLIP comes in how it deals with in-world racism, and implicit racism. There were a few problematic elements in SHELL GAME, but they were small enough that, while noteworthy, did not substantially detract from the book. In BEGGAR’S FLIP the racism cannot be ignored, and in fact is dragged into the spotlight in several areas, where Latoya is mocked for her skin tone and size by other characters (the ‘good’ characters refute the overt stuff, it should be noted).

The issues here are more in how problematic elements are portrayed. Homophobia is presented as an in-world issue as well, yet none of the lesbian characters are subjected to anything near as pervasive and derogatory as Latoya. Lesbianism is also not called out at basically every opportunity, unlike the two characters with darker skin, who, the reader is reminded constantly, do not look like everyone else.

His saddle-brown face was flushed with anger. (note that the white characters seldom, if ever, get their skin tone mentioned. This is known as white default)

Compounding that is basically every description or scene with Latoya, wherein it is mentioned that she is black, or very tall, or very muscular, or very strong, or some combination. Or that she feels little pain. While this bias is implicit more than overt (and it is clear the author is trying very hard to give Latoya agency), it falls squarely into problematic tropes of consistent othering, magical negroes, sassy black woman, and the tropes of black people being valued for their strength and physical fitness (see essays here and here), as well as the dominant black woman trope.

I could see Latoya already, looming head and shoulders above the rest of my sailors as they cleared the decks. The coil of chain draped over her shoulder was smeared with bits of things that I didn’t want to think about.

“You think that’s actually a woman?”

“I think you’d have to shave it if you wanted to know for sure.”

“I dunno if shaving it would help. Probably isn’t much of a difference between a gorilla and a brown bitch, once you take off the hair.”

Latoya smashed her fist down on the rail with a shattering crack, and wood splinters flew.

I jumped. I challenge you not to jump when someone of Latoya’s size starts breaking things near your head.

Some other minor quibbles came up, more dealing with a lack of research more than anything. It should be noted that placing moldy bread on an open wound is a great way to get an even worse infection and potentially die of sepsis.

“She scraped the mould off the bread, rubbed it on a rag, tied it against the sore, and then she pulled out a pallet and made me take a nap…And do you know, when I woke up, I felt better.”

The recurring discussion of using moldy bread to heal infections (instead of leeches and such) is deeply problematic, in that A) bread molds from several thousand different fungi; B) penicillin is derived from just a few species of Penicillium; C) Penicillium is a HUGE genus; D) it takes thousands of cultures of the right species of Penicillium to make enough penicillin to fight an infection; D) penicillin is a fungal secondary metabolite that is secreted by certain fungal species. It has to be extracted off a substrate. You could shove three whole loaves of moldy bread into an open leg wound and it still wouldn’t be enough penicillin to do anything. Anything.

Bows have not, nor have they ever, been made from rotten wood. Traditional bows, especially those made from yew trees, were made from the heartwood/sapwood interaction zone. Tree heartwood is dense and rigid. Tree sapwood (usually a lighter color) is springy and soft. With the heartwood on the inside and the sapwood on the outside, the bow has strength and elasticity. Sapwood is not rot. Sapwood is a normal part of the tree. Rotten wood, especially white rotted wood, does not bend–it breaks apart into mushy white strands.

“But let’s say you’re making a longbow. The best longbows come from yew trees that are rotten on one side. The other side, the good one, has to hold the tree’s full weight, so the wood there gets denser and stronger.

This is also not how reaction wood works, for the record. Wood that grows in a tree in response to lean, or stress like identified above, is actually very poor quality. Depending on whether it is a conifer or a deciduous tree, it lacks various layers of the wood cell wall and its microfibril angles are all kinds of screwed up. Reaction wood also has much more longitudinal shrinkage than regular wood. It is terrible for building anything, especially something you want to have strength.

Despite all of this, BEGGAR’S FLIP has all the fun quips and dialogue we’ve come to expect from Benny Lawrence, and is worth a read even if it gets filed under ‘problematic favorite.’ SHELL GAME remains one of my all time favorite books, and I would definitely read another in this series.

Regon liked breasts, Ariadne had two of them–relationships had been built on less.

Ah, but the best relationships are built on exactly that!

You can tie yourself to a mast of a pirate ship and hope for a very hot pirate queen lover by buying the ebook here and paperback here.