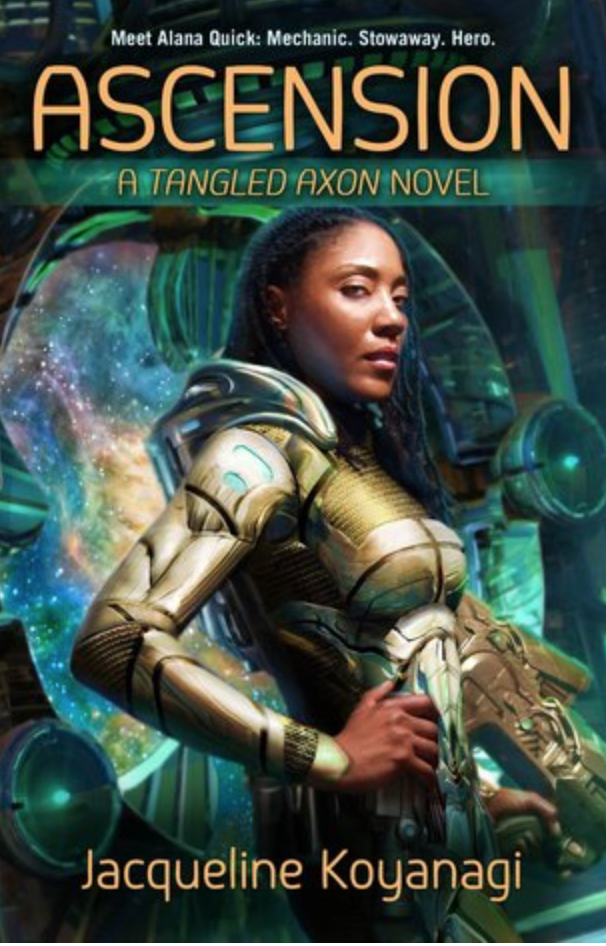 All Alana has ever wanted is to be an engineer on a real live spaceship. A crippling, chronic illness for which she can barely afford medication, as well as her family’s poverty (and the general lack of ship engineer jobs), has kept her from achieving her dream. When the intoxicating Tangled Axon comes to her repair yard–dripping seduction like THE SHIP WHO SANG–Alana takes a chance and stows away, hoping that the crew won’t find her before they’re too far from her planet to make a return trip. But the crew have their own plans, including kidnapping/coercing Alana’s sister to save a dying crew member. Alana must find her place on the ship, save her sister and the crew she increasingly grows to love, all while trying to keep herself from succumbing to Mel’s Disease.

Noting how well the catch-line ‘lesbians in space’ sells books, I’m really surprised there aren’t more excellent lesbian space operas like this in the world. ASCENSION is evenly paced, and filled with wonder and action and all the right kinds of emotions. It’s the Star Wars we all wanted, but will never get because Hollywood would implode if someone suggested black women leads (and heaven forbid one of them be struggling with a chronic condition). The elements of magic blend seamlessly with the tech, the secondary characters are well developed, and it has multiple layers of relationships. It is the quintessential space opera, but with enough lesfic elements and shoot-em-up moments to keep any reader happy.

There are a number of strong relationships in the book. Central to the story is Alana’s relationship with her sister, Nova (the ‘Jedi’ of the book), who is presented as a pretentious asshole with a fierce protective streak. The journey of the two sisters finding each other rang very true to sibling dynamics, and was immediately a hook for me. The second strong relationship was between Alana and Tev (the love interest), which was exactly the kind of slow burn I love in a book. The relationship develops slowly (but not so slow you want to throw the book into your window), and the eventual coming together of the characters is sweet but passionate. Tertiary relationships, between Alana and the other crew members, are engaging and do not in any way detract from the main two relationship plot threads. Every interaction pairing was intuitive and rewarding.

Like any space opera, this one pulls from a number of familiar elements. Readers will find Tangled Axon reminiscent of THE SHIP WHO SANG, or, if you’re a younger reader, the ship from THE LONG WAY TO A SMALL, ANGRY PLANET. Star Wars parallels saturate the narrative, from the Jedi-like sister (seriously, we aren’t the fugitives you’re looking for. Look! I have a tail!) to the ‘just-on-the-wrong-side-of-the-law’ semi-fugitives, to the scruffy pilot. ASCENSION blends these elements into a comfortable, familiar yet exciting narrative with far more diversity and marginalized voices than the mainstream book/cinema has managed to ever produce (Black Panther aside, cause that was awesome).

The engineer of the Tangled Axon is a wolf-man. Not a werewolf. A wolf-man. He has some type of wolf soul. I’m still sort of unclear on this but every time he was on page, I could only think about the ‘dinosaur souls in buff men’ book series by Nina Bangs. Full disclosure- they’re not gay at all but they’re…an experience. Yup.

Anyone in the mood for excellent space opera can find ASCENSION: A TANGLED AXON NOVEL here in ebook. The book is out of print (ARGH!), so if you want a paper copy, you’ll have to cough up $30 to get it used.