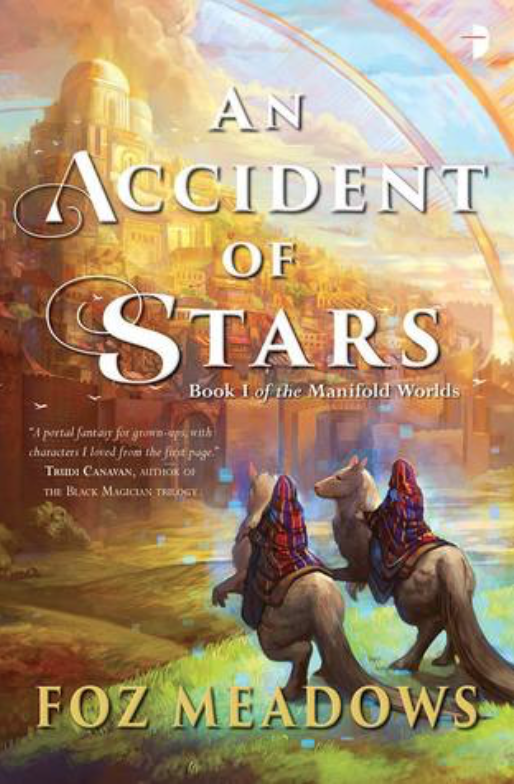 Saffron Coulter, a mild-mannered but angry sixteen year old girl from Earth, has had enough. Between the sexual harassment from the boys at her school to the uncaring faculty, Saffron’s biggest wish is that someone would just stand up to all the BS. Someone other than her, that is.

During a particularly nasty encounter with a schoolboy, Saffron is saved by the unknown Gwen, a woman with a mysterious past. Saffron ends up following Gwen to a more secluded area of the school–mostly to thank her–when a portal opens. And Saffron, being done with boys and high school and Earth, hops right in.

What follows is a twisting, engaging if not sometimes confusing, adventure through Kena–a magic using world teetering on the brink of war. Gwen, the worldwalker Saffron followed through the portal, must bring her up to speed on a very complex social hierarchy and several religions lest Saffron get herself killed through simply existing. As happens in these types of books, Saffron soon becomes ensconced in the war and ends up a key player in the final battles.

I have mixed feelings about this book. The beginning is strong, and Saffron a sympathetic protagonist. Her motivations for going through the portal make a lot of sense and her first day or so on Kena has a lot of strong action. The setting is delivered well, the secondary characters are charming and delightful and cruel, and enough tropes are employed to help the reader feel comfortable in the world before they have a lot of information.

Where I struggled was with the swapping third to omniscient voice and the number of characters who got to wield either or both.

In some places, the POV switch is indicated by a line gap. In some the head hopping happens simply between normal paragraphs. There never seemed to be a reason for why narration changed, and it didn’t seem to follow the character with the most agency or interesting happenings, either. Due to the sheer volume of characters that were allowed a POV, I soon lost interest in a sizable section of the world.

Because I was so invested in Saffron and Zech (a younger girl who ends up in a sort of mind-meld with Saffron) I persisted through the book. The back third was mostly delightful, and the action, especially when the group hit the queen council and Zech and Saffron had to go through trials, was by far the best part. The final battle as well was very well done and the book had a fantastic, melancholy-but-still-happy ending.

It is saying something, however, that I skimmed pages and pages of this book, and almost the entire princess storyline (after her introduction, when it was clear she would only be annoying) and still felt like I didn’t miss anything. The ending made perfect sense and the final battle was still very compelling. As AN ACCIDENT OF STARS skims close to high fantasy, I wonder if it wasn’t shooting for world-as-character levels of description, and just fell a bit short.

I enjoyed that Saffron is Australian, which isn’t a POV I get to see a lot of in mainstream fiction. The racism of the teachers and Saffron’s own internal racism are addressed on page, and that was wonderful. I’m not sure I’ve ever read a fantasy that called out the implicit bias of its characters so directly:

“Not seeing Viya as a queen because she’s not white is racist,” she whispered into the pillow. “I’m being racist.”

British racism was also touched upon:

She didn’t say, ‘the police wouldn’t look for me when I vanished, because they didn’t think a missing black woman mattered.’ She didn’t say, ‘my parents convinced themselves I’d run off with a boy I was too ashamed to bring home, and when I came back, the second thing they asked was if I’d had an abortion.’

The trans rep was also fantastic, which isn’t surprising since the author is genderqueer. The ‘alikrevaya’ (trans) are seen as a natural variance and allowed to declare themselves however they wish. The worldbuilding of a culture of trans acceptance was so seamless that it actually took me a few pages to realize what the author was talking about. Also, they have sex-affirmation magic. Fantastic.

“It means she was born with her body and spirit in conflict, so the priests of Kara used the sevikmet to reshape her.”

“Bodies are bodies, and hearts are hearts. The priestess hood admits women only, though flesh plays no role in such determinations;”

Overall, AN ACCIDENT OF STARS is strong portal fantasy with solid queer rep and a sweet f/f line. The action scenes in particular stand out, although the book would have benefitted from some tighter 3rd limited.

To go through your own portal to Kena, buy the book here in print and here in ebook.