This review is for the SECOND book in the series. To read the review for ALICE PAYNE ARRIVES, click here. 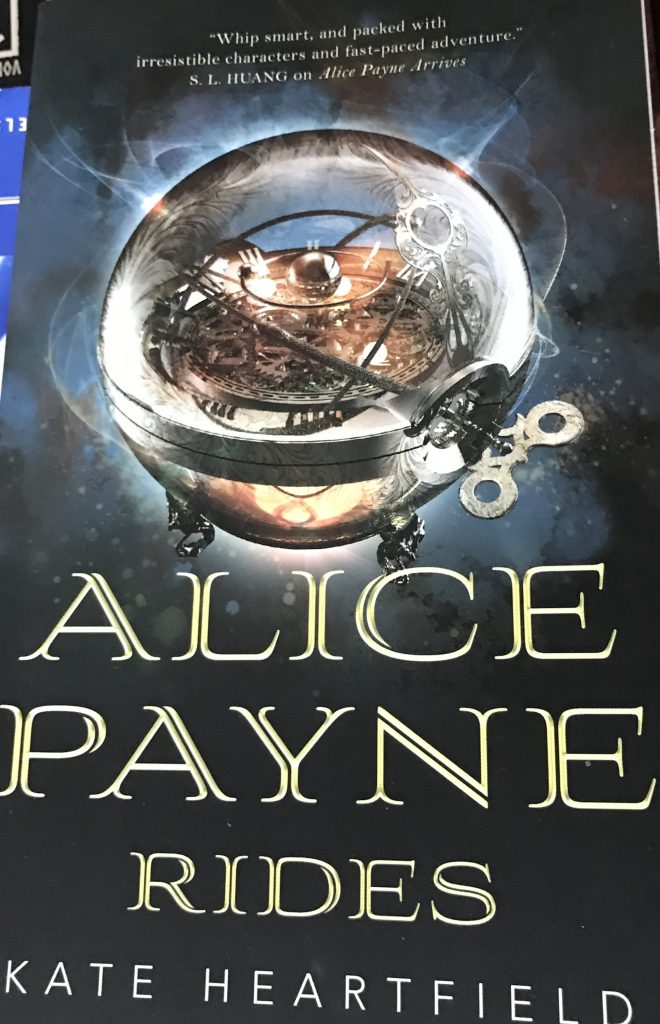 Have they successfully helped humanity and stopped people from using time travel, or has our daring group of heroines bungled things further? This sequel to ALICE PAYNE ARRIVES begins with another botched time travel job, this time accidentally bringing back Arthur of Brittany (yes, King Arthur) to the late 1700s…and smallpox along with him. Alice’s lover and inventor Jane has not had her vaccination, nor have many of the servants of Alice’s manor (now no longer in debt thanks to book one, YAY!).

They need a vaccine not available until the next century at the earliest. And, unbeknownst to the lot of them, Arthur’s abduction sends huge ripples in the time line, alerting Prudence’s boss to her whereabouts (she’s been in hiding since going rogue in book one).

And of course, since the group has not one but two time travel devices, our lovers end up trying to unravel the mystery of Alice’s deceased father and what plagued him in his later year’s dementia, while Prudence tries to sort out time. Alice and Jane get stuck in the USA during the revolution, their time device breaks via Prudence’s boss, Prudence’s beloved sister is erased from history, etc. IT’S A GIANT TIME FUCK but Alice and Jane still find time for heart-to-heart talks and some serious conversations about their relationship.

ALICE PAYNE RIDES is less coherent than its predecessor, but no less fun. It still has tons of time travel hijinks, steam-punk flavors, wacky inventors, and lady highway robbers. And the cover is more gorgeous than the first, which is a real feat. Like the first book, it also discusses mores around lesbianism at the time, but in a very tongue-in-cheek fashion:

Mr. Duncan makes a sound like a kettle about to boil. “I hope you pay little attention to the scurrilous libels in the London newspapers, Miss Payne. Certainly there are women who amuse themselves with Sapphic romances, but there is no true carnality in…playacting. It’s a physiological impossibility, you see. Isn’t it, Dr. Jenner?”

Join Alice, Jane, and Prudence in more time travel shenanigans here. Though as things never seem to work out all that well for them, maybe you’re better off discussing hedgehog reproduction with Dr. Jenner.