This review is for the first book in the series. To read the review for ALICE PAYNE RIDES, click here (will post one week after this review). 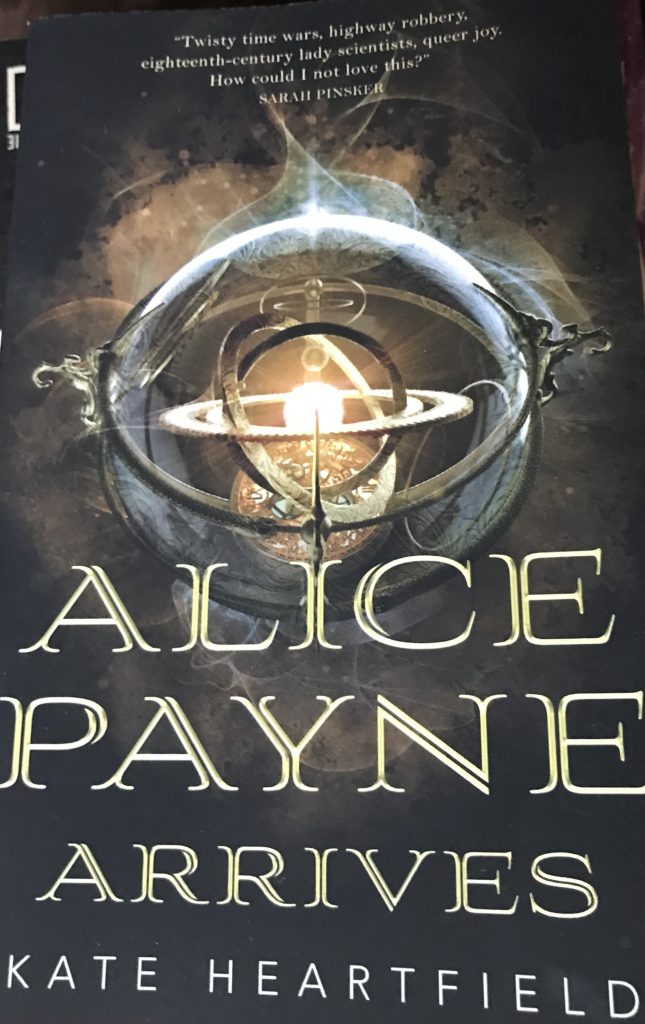 The year: 1788. A mysterious highway bandit called ‘The Holy Ghost’ haunts a small section of road, attacking scoundrel men. The woman behind the mask is Alice Payne, indebted daughter to an aging father, desperate to pay of his debts, keep her childhood home, and the interest of inventor Jane, Alice’s ‘companion’ at Fleance Hall.

The year is also 1889, where Major Prudence Zuniga, a professional time traveler and meddler, is attempting to alter the course of human history by keeping Prince Rudolph alive. Of course, to Zuniga the year is also 2145, her year, in which two groups of time traveling bodies (the ‘Farmers’ and the ‘Guides) war to ‘fix’ humanity’s past and keep its future from combusting.

During a standard robbery of one asshole Earl of Ludderworth, who enjoys pressing his advantage on serving girls, a shimmer in the air catches the Earl and flings him into the future. Determined to not let the Holy Ghost be known as a murderer, Alice (with the help of Jane) tracks down the shimmer and finds herself in 2070…and also finds Major Prudence Zuniga. Having completely fouled up both the past and the future at this point, Zuniga takes the earl and Alice back to 1788, where Alice can be used as a pawn in the time wars. This all looks good from Alice’s end–Zuniga has promised her enough money to pay off her father’s debts (thereby ensuring she can live on at Fleance Hall with Jane for the rest of their days)–but time travel never seems to work the way one expects.

Zuniga’s continued meddling leads to a cascade of history changes, each worse than the last. In the end it is only an adventurous highwayman and her inventor-lover that can save Major Zuniga, and humanity’s future. Along the way the reader is treated to steam-punk like automatons, Victorian silliness, an endearing love affair, and a host of strong, three-dimensional women.

The book is short-only 168 pages in the print version, and a quick, engaging read. Keeping track of the various dates isn’t really necessary as the voice of the characters are each distinct. The pacing is excellent for a novella, though the worldbuilding is sparse (though, again, novella). The cover art is gorgeous and for that alone the book deserves a spot on your shelf–though I think most readers would be delighted to revisit Alice Payne on reread.

Readers familiar with the US political landscape of 2016 (and who can block out the horror of 2020) will enjoy the numerous jokes about Zuniga having to go to 2016 to fix history there:

“But 2016 is completely fucked,” she says, trying to keep her voice even. “You know that. Sir. We have to go back earlier.”

I have only two quibbles with this book. The first is that the inventor, Jane, gets very few chances to shine and she is by far, to me, the most interesting character. Brought to Fleance Hall by Alice’s father, Jane is the ward of Alice’s father’s cousin (follow that??), and also the builder of Alice’s accomplice automaton for the highway robberies. She is quick to put Alice in her place, rational, and endearing, and really deserved at least a few POV sections.

“Sometimes I think you see me as a great experiment, that you say things to get satisfaction from my shock. Little Jane, poor and plain, small bubbies and a big brain. That’s what the boys used to say, to shock me. You could try it, rather than declaring your intention to disappear into some other time and place and carry out some unknowable scheme at a stranger’s behest.”

The second is that I think I’d have preferred an novel almost entirely about Alice and her highwayman tendencies. Zuniga is a fun character and time travel is always awesome, but splitting between the two meant we didn’t really get to revel in how much fun it is to attack jerks on roads with your mechanical assistant built by your secret live-in girlfriend. I mean come on. Someone write this fan fiction, I’m begging you.

Grab an automaton and a cute girl and join Alice Payne on her adventure here.