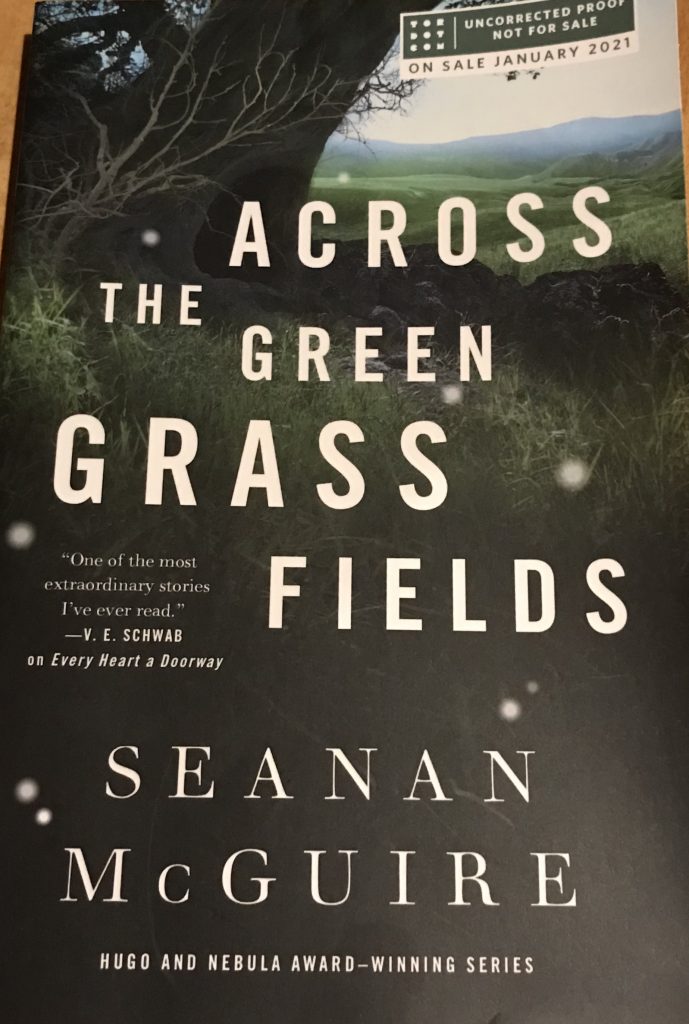 Full disclosure – this isn’t an impartial review because I worked as a sensitivity reader on this book. But the Wayward Children series is one of my all-time favorites, and I wanted to take some time to discuss parts of the book that really moved me, especially as they relate to intersex conditions. The main character and I shared a diagnosis at the time of this book’s writing (mine has since been changed from AIS to ‘we-don’t-know-what-the-fuck-you-are-but-definitely-it’s-an-intersex-thing’ syndrome).

“You’re not a boy,” said Maureen soothingly. “If you feel like you’re a girl, then you’re a girl. You’ve always been our daughter. You’re just also part of a small percentage of the population who are considered intersex, meaning your body  has its own ways of regulating things like hormone production. Some intersex people are more clearly a blend of what doctors would consider male and female attributes; that wasn’t the case with you. There was no surgical intervention or modification after you were born–not that your father and I would have approved that if the doctors had wanted to do it. You are exactly as you were meant to be.”

(bold emphasis added by me)

(I want to add here, that it’s great to see a definition of intersex that encompasses not just those with deeply externally visible differences. Our understanding of intersex conditions has come so far in the past decade, now working to include PCOS as well, and it’s important to remember that it can be changes to your internal structures as well as hormones, that make the unique cocktail that is Disorders of Sexual Development (DSD), or intersex.)

Though her parents are fully supportive, best-friend Laurel absolutely loses it. She declares Regan a disgusting boy, kicks her out of the social circle, and blabs about it all over school. Regan, having wanted nothing more than to just be normal her whole life, runs into the nearby forest, where she finds her door.

This door takes Regan and the reader to the Hooflands – where all the beings are some form of horse-type creature (with some exceptions, mostly drawn from the canon of G1 1980s-era My Little Pony). She is first entranced by the unicorns, but soon gets picked up by a herd of centaurs, who think her most unusual feature is her ability to climb trees easily and swim:

“When a human shows up in the Hooflands, it means something bad’s about to happen. You’re tricky little things. Well suited to tight spaces, and thumbs. Having thumbs is sort of like having a magical sword no one can take away from you. It’s destiny!” Pansy held up her hands and wiggled her own thumbs exaggeratedly. “Centaurs have thumbs, but we can’t fit in a lot of places humans can, and we don’t swim very well.”

Thus, Regan finds the normal life she always wanted with the (unicorn ranching) centaurs. Mildly hanging over her head is the knowledge that humans only come to the Hooflands when a Great Deed is needed, and that at some point she will go the way of the other humans – to the Great Deed, and then vanish.

Aside from the Hooflands clearly being where I’d go regardless of being intersx (hello, My Little Pony obsession!), the book’s entire structure treats intersex conditions in the way I think most intersex people treat them–a part of who we are, but not WHAT we are. This isn’t a book about a girl overcoming being intersex, or coming to terms with being intersex. It’s about a girl who happens to be intersex, and gets to have an awesome adventure where she learns everything she is, is enough. She doesn’t need to be a hero. She isn’t anything special. She’s just Regan. And that’s okay.

It also allows the reader, through Regan, to remember the desire for the simplicity of childhood as our peers moved into the complex social dynamics of junior high/middle school, and high school. It walks that fine line between innocence and self-awareness, which is nowhere more apparent than here:

“No one’s going to snatch me in the food court,” said Regan, the uneasy awareness that children had been snatched in food courts before flooding in on the heels of her words. But that was in another world, one filled with bullying, backstabbing humans, not in this brighter, cleaner world of horse-people and honest answers. She would be fine here.

Inadvertently, Regan and I share this aspect in common too (unbeknownst I think to Seanan when she originally wrote this). I was abducted from a mall arcade in the sixth grade, though I was the exact age Regan is in this book. Which is probably another reason I found such a great home in the Hooflands, along with Regan and the centaurs. And I do appreciate the Tyrek cameo, since Escape from Midnight Castle scared the living daylight out of me as a kid:

Seen this close, he was terrifying, a mountain of a man walking through a world built to a much smaller scale, Each of hooves was larger than her entire face. He swung his muzzle around to face her, expression bovine and unreadable, and snorted.

Though I did find the following section the most chilling in the entire book, possible because I tied it to the discussion of food court abductions, as above:

None of them looked away until Regan had reached the place where the road began to bend out of sight. Bit by bit, she disappeared. One of the goals made a disbelieving wailing sound. She didn’t come back.

She didn’t come back.

For me, this was the perfect book. Perhaps because I’ve read the entire series and never felt at home with any of the doors, partly because I think I didn’t realize how much I needed to see an intersex child having an adventure completely independent of her chromosomal arrangement. This book is beautiful, and melancholy, and fractal, and I think it will be not only a lifeline to those who share Regan’s diagnosis, but to anyone who has ever felt like their biology kept them somehow apart.

You can see if a door will let you into the Hooflands by preordering here. Note – extensive knowledge of MLP not required, but useful.