This is a review for the second in a series. To read book one, A LONG WAY TO A SMALL, ANGRY PLANET, click here. 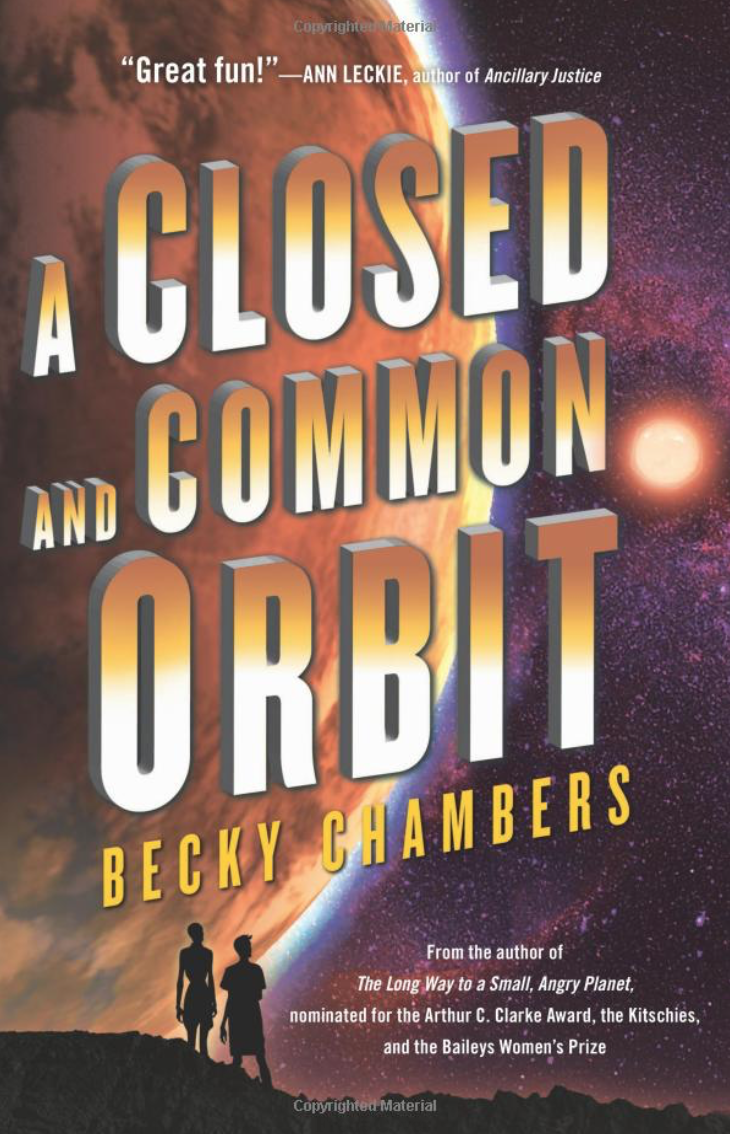 Picking up right where THE LONG WAY TO A SMALL, ANGRY PLANET left off, Lovey, the sentient AI, is in her new body and not having a good time. We follow her journey to understanding herself and her new housing, along with her friends/guardians Pepper and Blue.

As with LONG WAY, there isn’t an immediate through line to this book. Instead, we hop between (mostly) Pepper and Sidra’s (Lovey’s new name) POV and their day-to-day interactions. Sidra learns about being human and being limited by having just two eyes and a limited memory, meets a gender fluid alien who kind of gets her, has a disastrous tattoo experience, and really fleshes out the struggles of Lovelace in book one.

Most of Pepper’s POV is from the past, wherein we learn about Pepper being raised by another sentient AI, Owl, on a craptastic world. Pepper is a genetically engineered girl–only one chromosome–and was bred to sort scrap in a factory and never see the sky. Her compelling backstory (my absolute favorite part of the book) sets the stage for how she interacts with Sidra, and allows for a plot to finally coalesce in the back quarter of the book, where the four characters–Blue, Pepper, Sidra, and Sidra’s new friend Tak–break into a museum to try to steal Owl out of the ship that has become her tomb.

This book didn’t have the same level of science in it as did LONG WAY, but the mod speak and pseudo forum-Discord-chat board lingo is spot on. As with LONG WAY, the characters are dynamic and three dimensional, and you can’t help but love all of them. Chamber’s hallmark is character development and character interactions, and both shine through in ORBIT.

As always, there is plenty of solid queer rep. Tak (an Aeluon, a species with four genders) is particularly well done, and the discussion of how Tak changes genders, and the hormones and cultural norms around that and Tak’s entire species, is utterly fascinating. Pepper is a nice inclusion for intersex rep, though hers comes through genetic engineering and not biological diversity.

The strongest parts of the book are the human(alien)/AI interactions. Pepper’s relationship with Owl is completely child and mother, and absolutely breathtaking as Pepper tries to navigate isolation and survival and puberty. Pepper’s relationship with Sidra walks that awkward friend/caretaker role, but Pepper’s compassion for AIs, stemming from her upbringing, is organic. Their arguments pull the reader from both sides, and the resulting tension keeps the book moving forward without any need for a plot.

Some other fun notes

It’s the attention to detail that always makes Chamber’s books stand out. A CLOSED AND COMMON ORBIT includes in-text AI user manuals, chatroom dialogue, and a bunch of other fun snippets that build the world:

Yes, you can have sex! You’ve got all the parts for it, and unless you’re coupling with an expert physician who spends a lot of time looking at your bits under good light (hey, to each their own), no one will be able to tell the difference. But before you get to it, please do plenty of research about health sexual relationships and proper consent. Ideally, ask a friend for advice. Similar to the recommendation about hand washing, you should also practise good hygiene and disease prevention practices for the same of your partner. There’s no guarantee that xyr imubots are up to date.

Which leads me to my next favorite part – the use of ‘xe’ and ‘xyr’ when you don’t know someone’s gender, or when they are not a ‘he’ or a ‘she’. Fantastic neopronoun, and used perfectly in text.

The Big Bug Crew. I just… the sims and their descriptions and Pepper’s connection to them are just so perfect. I know The Big Bug Crew. After reading this book I would play that sim and buy those toys. That’s how deeply affected I was by Pepper’s reactions to and time with the sim.

While the first book in the Wayfarer series wasn’t a strong favorite, A CLOSED AND COMMON ORBIT was an easy and emotional read. It can be read as a standalone or as the second in the series, and is a must read for lovers of character-driven space opera.

Get your own sentient AI system (illegal, of course, but still cool) here in print, here in audio, or here in ebook.

Read the review for the first in the series, THE LONG WAY TO A SMALL, ANGRY PLANET, here.