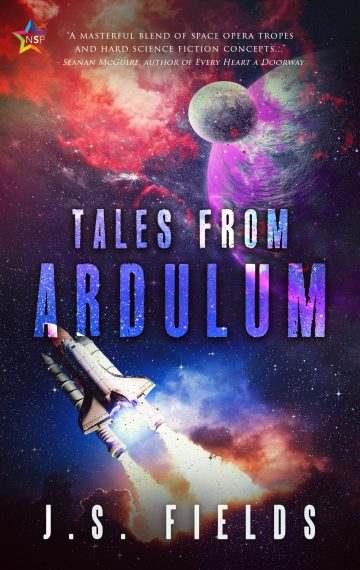 Take one final ride with the crew of the Scarlet Lucidity.

One year after saving the Neek homeworld and redefining the people’s religion, the crew of the Scarlet Lucidity returns to the Charted Systems for a much-need break. For Nicholas and Yorden, the Systems will always be home, but for Emn and Atalant, too many memories compound with Emn’s strange new illness to provide much relaxation.

TALES FROM ARDULUM continues the journey of Atalant, Emn, Yorden, Nicholas, and Salice as they try to define their place in a galaxy that no longer needs them while battling the artifacts of Ardulan colonization. Other stories include Yorden’s acquisition of the Mercy’s Pledge (and his grudge against the galaxy), Atalant’s exile from her homeworld, Ekimet and Savath’s romance, and many others.

TALES also has FOUR full page illustrations of the crew by Micah Epstein!

Releases June 10th, 2019. Preorder here, shoot me an email here, and choose from one of these AWESOME preorder goodies!